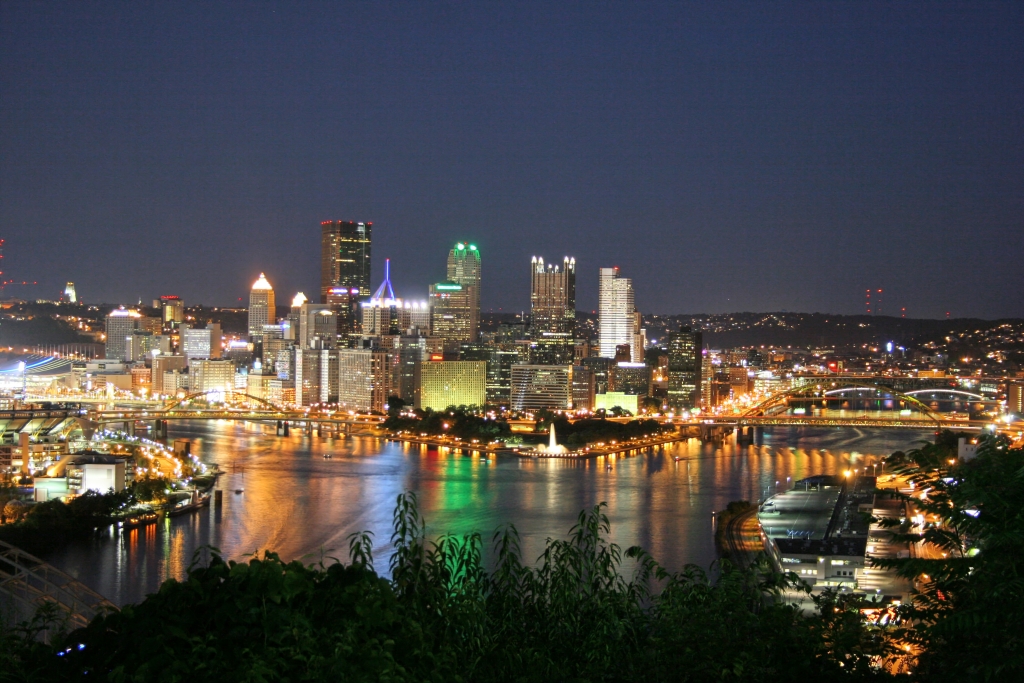 On Wednesday, November 8th, the University of Pittsburgh’s Library System and Center for the Humanities in partnership with the City of Asylum bookstore in Pittsburgh, PA, hosted a discussion among bilingual panelists about their experiences and ideas about curiosity. The event, “¿Se Puede Cultivar la Curiosidad?” (Can Curiosity be Cultivated?) featured panelists Rosamaria Cristello, Executive Director of the Pittsburgh Latino Community Center, José Carlos Díaz, Chief Curator of the Andy Warhol Museum, Diego Chaves-Gnecco, MD, MPH, FAAP, Developmental-Behavioral Pediatrician and Associate Professor of the Children’s Hospital of Pittsburgh UPMC, and Angelica Ocampo, President and CEO of the World Affairs Council of Pittsburgh. The discussion, led by Kate Joranson, Head of the Frick Fine Arts Library of the University of Pittsburgh, and Silvia Duarte, Assistant Director of the City of Asylum bookstore. The discussion revolved around multiple issues surrounding the topic of being bilingual in the Pittsburgh community, with a focus on the way curiosity is experienced and cultivated. The panelists touched on the way they witness curiosity in their community and personal lives, how people’s curiosity towards the panelists backgrounds and identities affects them, and how the environment created by the current federal administration affects curiosity in Americans, to name a few of the lines of discussion.

Particular attention was paid to a matter that  has recently been gaining relevance in debates among linguists, psychologists, and bilingual communities in general -namely, the potential effects of bilingualism on curiosity. The concrete trigger was in this occasion a question posed by Ms. Joranson -"Does being bilingual affect your curiosity?" The growing number of bilingual

people worldwide has indeed made this question all the more relevant for contemporary societies, and is even explored through the media and Hollywood. Yudhijit Bhattacharjee, of the New York Times, claims that being bilingual has many benefits other than it’s practical uses, such as improving cognitive skills, preventing dementia, and making a person more adept to completing curiosity based puzzles and tasks (Bhattacharjee, 2012). The 2016 film “Arrival”, directed by Denis Villenueve, explores how learning another language can affect the way a person perceives the world, in the film, going as far as having the main character learn to perceive time in a non-linear manner by learning an alien language (IMDb, 2016). Certainly, the concepts illustrated in “Arrival” seem far-fetched, but the panel agreed on pointing that learning a second language does have a significant impact on a person’s curiosity in various ways. In any case, however, the question remains open, since no definitive answers are currently available.

Panelists seemed to agree in seeing curiosity as an innate human attribute. In fact, every stage of a child’s development is due to curiosity. Although curiosity is more frequently cultivated in nourished in childhood and adolescence, it does not disappear as we mature into adulthood. In order to explain how adults explore their curiosity, Díaz referred to the case of visitors at the Andy Warhol museum being intrigued by the Farsi language incorporated into the work. Despite not knowing the language, they were curious about the meaning the artist was trying to convey. He used this analogy to explain that being bilingual allows a person to further explore their curiosity in a way that is not impossible, but more challenging for those who speak only one language.

So how does being bilingual affect the curiosities of these panelists, and how does it affect the curiosities of the bilingual latinx community of Pittsburgh? Ocampo explained that being bilingual allows a person to represent and think of concepts and ideas unique to other nations and cultures. There are words that exist in other languages that do not have an equivalent in English, and therefore these concepts do not cross the minds of English speakers. For example, Ocampo referenced the word “sobremesa”which refers to the time spent enjoying one’s company directly after a meal and has no English translation. “Sobremesa” can occur for hours as people share stories and enjoy the time they have with each other. Although this is not unheard of in the United States, it is a rather unique tradition to Latin America, and provides a better understanding of the importance of time and family in Latin America compared to that of the United States. Thus, a better understanding of cultures not only stimulates curiosity, but also provides more instruments for subsequent exploration.

Being bilingual not only allows a person to find more opportunities through which to cultivate their curiosity, but also to have an deeper understanding of other culture in turn facilitating much more efficient ways of communication and a better connection to the world. As Ms. Marinero summarized, “language shapes your thoughts”. A concept expressed through all of the panelists arguments on how bilingualism affects their curiosity. Whether that be through a better understanding of other cultures, more opportunities, or more efficient communication with people of different backgrounds.

With a growing latinx population in the United States, studying Spanish opens for English-speakers good opportunities to cultivate their curiosity.