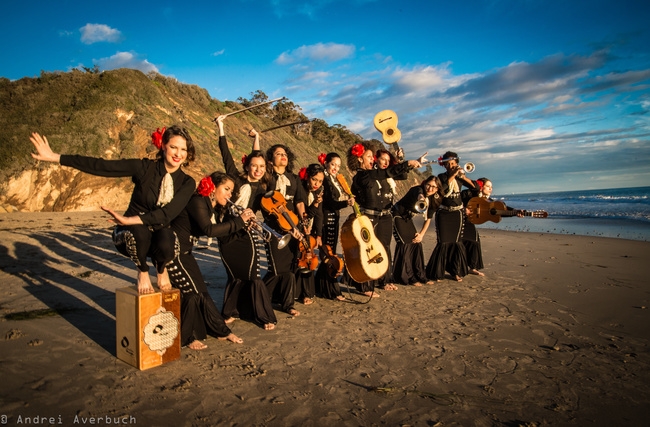 Those familiar with the traditions of mariachi bands in Mexico know that they usually consist exclusively of male musicians. Yet, Flor de Toloache, an all-women mariachi band based in New York City, is changing the face of mariachi in many ways.

Mariachi has been an important musical genre in central-western Mexico since the 18th century1. More specifically, it originated in the countryside after the introduction of instruments like the guitar and violin by the Spaniards, and was traditionally played in more rural parts of Mexico.  However, when mariachi bands were becoming better known in urban areas of Mexico, the practice spread from being known as the music of the country people to a wider national tradition1.

The mariachi groups of today consist of, but are not limited to, as many as six to eight violins, two trumpets, several different types of guitars such as the vihuela, and even a Mexican folk harp1. Throughout history, mariachi bands have played at special occasions like religious events, festivals, weddings, and even funerals. Mariachi bands have even been used to serenade a loved one in the rite of courtship.

Like music, society and norms are fluid and always changing. The group, Flor de Toloache was founded by violinist, vocalist, composer and arranger, Mireya I. Ramos. Mireya is no stranger to the world of mariachi music: her father, Armando Ramos, was in a mariachi band, and she herself has many years of experience with mariachi music. In 1999, Ramos traveled from Puerto Rico to New York and began playing with a mariachi band named Mariachi Angeles de Puebla. In 2008 she started Mariachi Flor de Toloache, New York’s first all-female mariachi band2.

Mariachi Flor de Toloache is reimagining the faces of mariachi, not only by being an all-female mariachi band, but also by having people of all different backgrounds in the band. Mireya Ramos is of Dominican and Mexican descent and was raised in Puerto Rico. Other members of Mariachi Flor de Toloache come from all over the world and Latin America including Oregon, New York, Colombia, Germany, Italy, and Cuba2. Despite having different perspectives from all around the globe, the group’s diversity does not take away from the traditional Mexican music.Their mission is to preserve the old traditions of mariachi, while also introducing new, modern influences to challenge the genre and introduce it to new audiences.

Flor de Toloache’s music is an inspiration to many and has risen to monumental heights in the world of mariachi music. In 2016 alone, they were nominated for the Latin Grammy, their album “Mariachi Flor de Toloache” reached #1 on iTunes Latino Charts, and they toured as an opening act for the band The Arcs2.

The multi-cultural band has embraced the culture of mariachi and made it accessible to others in the New York and global community. Whether on the streets of New York, on tour, or through the internet, the music of Mariachi Flor de Toloache exposes listeners to diverse cultures and backgrounds of the world.