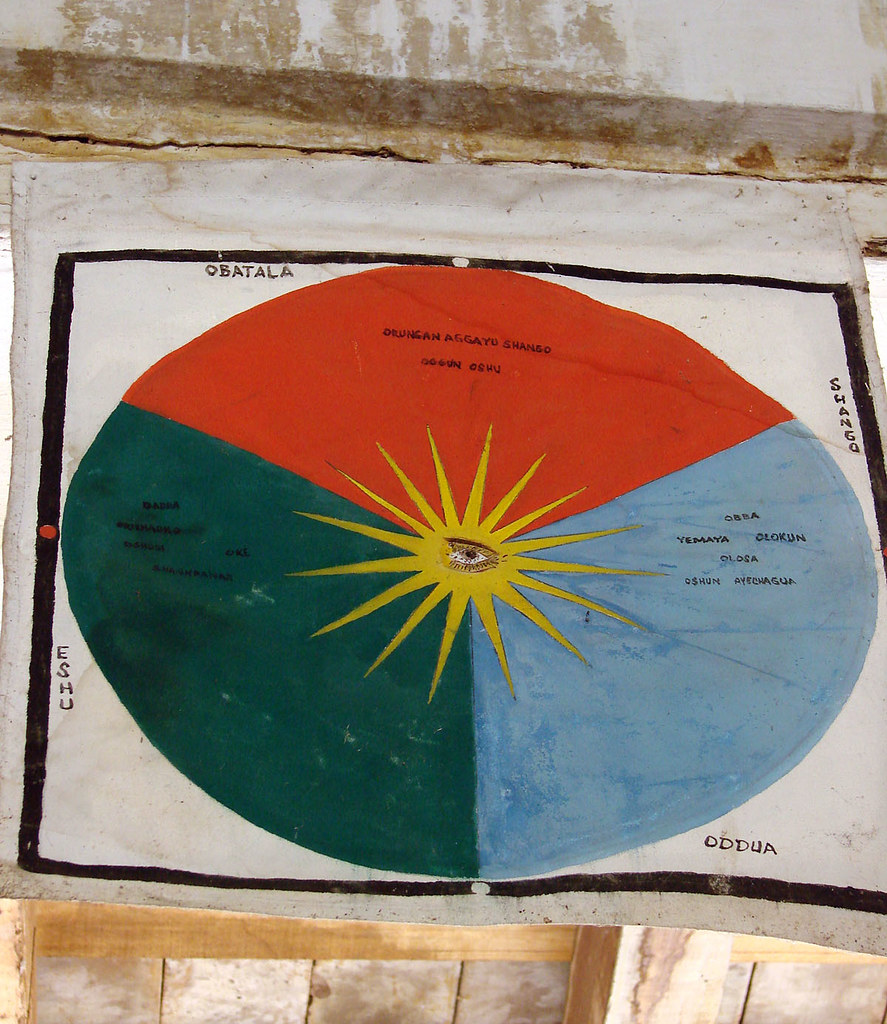 “The gentrification and commodification of non-Western medicine and spiritualism is dangerous—all at the expense of the very people who created it” (Shaukat, 2021).

Spiritual practices and brujería are gaining popularity on various social media platforms. From TikTok videos showing pick-a-card-readings, to Instagram reels explaining spells that anyone can do on their own, African diasporic religions have drawn widespread attention. Meaning “witchcraft” in Spanish, brujería describes or disparages occult religious practices in some Latin American and Afro-Caribbean cultures with indigenous roots (Guzman, 2020). Along with brujería, many diasporan religions comprise what is known as the Yoruba religion system.  In this age of technology, those who practice brujería or other spiritualities are using social media to reach a broader audience. But with widespread attention, misinformation can easily be spread. Because these spiritual practices have caught the attention of pop culture, appropriation is occurring all across platforms such as Tumblr, Twitter, TikTok, Instagram, and YouTube. It is imperative that we actively combat this erasure and commodification of these spiritual practices.

There exist many stereotypes and misrepresentations of African cultures and societies, especially in Europe and North America where the relationship to the continent is built on the history of the slave trade and colonization. (Adriaan van Klinken, Laura S. Grillo, & Hassan J. Ndzovu., 2019). The study of religion in relation to the diaspora often tells a story of cultural exportation, religious decolonization, and transnationalism (Geertz, 1993; Schuler, 2008). African diasporic religions are practices that have developed among enslaved Africans and their descendants in various countries of the Caribbean Islands and the Americas. This development stems from years of colonization and cultural resistance. During the centuries of European exploration and colonization of Africa, Western religions, particularly Christianity, were introduced by missionaries who strove to convert the indigenous population and suppress their traditional religions (Fieldhouse, 2017).  Millions of African people were forcibly displaced from their homeland and sold into slavery to European colonies during this time of violent colonialism. However, though they were stripped of their culture, they took their traditional beliefs with them, and these often survived and took on new forms in the foreign land. (Fieldhouse, 2017).  Religions such as Candomble, Santeria, and Vodun are examples of African animist--the belief that objects, places, and creatures all possess a distinct spiritual essence--traditions being blended with European Christian beliefs. (Fieldhouse, 2017).

The very words ‘African diaspora’ connotes a historical and cultural continuity between a center in Africa and a variety of peripheral communities in the Americas. Though there are a plethora of diasporic religious practices, they all stem from similar origins: the Yoruba religion. The Yoruba religion system is comprised of traditional practices and spiritual concepts which have evolved into a robust religious system (Sawe, 2019). Traditionally, it is believed that all human beings pass through what is known as “Ayanmo” which translates to destiny or fate (Sawe, 2019). It is important to note four features of Yoruba religious traditions in each of its diasporan settings: divination, sacrifice, possession, and initiation (Murphy, 2010). These beliefs are honored, despite the forcible blend with Western religions.

Candomblé is a syncretic religion practiced predominantly in Brazil. The name is of African origin, and its meaning is usually rendered as “dance in honor of the gods.” Dance plays a pivotal role in the practice of Candomblé. It originated in the 16th century among enslaved Africans in colonial Portuguese Brazil (Fieldhouse, 2019). Practitioners of Candomblé blend traditional African animist beliefs with Catholicism to produce a unique faith practice. There are an estimated 2 million followers of Candomblé, which has gained new popularity in recent decades (Fieldhouse, 2019). Candomblé is retained orally, therefore there are no scriptures or sacred writings. Candomblists believe in a single god named Olodumare and numerous minor deities called orisha (Murphy, 2010). Each person is protected by two personal orishas, both male and female, who control their destiny and can connect them to the spirit world by taking possession of their physical body (Lammoglia, 2006). Dance is an important part of religious worship as it is utilized as means to induce possession by the orisha. Worship takes place in people’s homes or at terreiros, of which there are thousands throughout Brazil. This is just one of the many unique religions practiced in the Americas.

Santería (Lucumi) is another practice that blends the Yoruba religion with Spanish Catholic veneration of the saints, has attracted followers around the globe (Adriaan van Klinken, Laura S. Grillo, & Hassan J. Ndzovu., 2019). Also known as Regla de Ocha, Regla Lucumí, or Lucumí, Santería is an African diasporic religion developed in Cuba between the 16th and 19th centuries (Bascom, 1950). It arose through a process of syncretism between the Yoruba religion and the Catholicism (Fieldhouse, 2019). Those who practice or believe in this are known as creyentes, meaning believers in Spanish. There is no central authority in control of Santería, which is organized through an autonomous group (Romberg, 2012). Santería is polytheistic and revolves around deities known as oricha. Various myths are told about these oricha, which are regarded as subservient to a transcendent creator deity, Olodumare (Romberg, 2012). Each individual is believed to have a specific oricha who has been connected to them since before birth and who determines their personality. An initiatory tradition, practitioners usually venerate the oricha in Casas, temples run by priests known as santero or priestesses known as santera (Counted, 2019).

“It’s either just for aesthetics or what’s going to spread and become more viral,” they said. TikTok’s time limits only expose people to the basics, too, rather than the grounding principles and histories behind these practices” (Shaukat, 2021).

There’s a difference between an aesthetic and a practice (Joho, J., &amp; Sung, M., 2020). Perusing through TikTok can now be characterized by the occasional “WitchTok” videos. This can be loosely defined as a section on the app filled with videos pertaining to Voodoo, witchcraft, and various other spiritual practices. At large, users on social media are sharing spells, tips on cleansing energy, and card readings across the platform. A further look, however, showed that perhaps “WitchTok” was simply another fad that showcased gentrified and commodified versions of spiritualism cut into 15-second clips (Shaukat, 2021). Not everyone partaking in this “trend” has an agenda to promote spiritual growth. Aurora Luna, an artist who practices a blend of witchcraft and Black ancestral rituals, noted that WitchTok can perpetuate misinformation and appropriation because of witchcraft’s newfound “cool factor” (Shaukat, 2021). A very harmful aspect of this appropriation is the development of businesses that profit off of these practices. The surge in small shops revolving around spiritualism-oriented merchandise is a violent force, as many of those who profit are often non-practitioners that stomp on the fine line between cultural appropriation and appreciation.

Respecting African diasporic religions is essential to the vitality and retention of these sacred practices. The Yoruba religion provides the basis for these religions, as they all exhibit practices of initiation, divination, sacrifice, and possession. With this, these practices have been stigmatized due to the biased view that favors Western civilizations over non-Western civilizations. However, the web has been a conduit for the promotion of African indigenous religions in the diaspora, whose presence has grown exponentially in recent decades (Adriaan van Klinken, Laura S. Grillo, & Hassan J. Ndzovu., 2019). Though this presence is beneficial for the sake of growth and awareness, it can be weaponized against those who share their honest practice. It is not uncommon to see businesses, organizations, and people using ancient wisdom and customs in order to profit (Haapala, 2021). It is not only courteous but indispensable that we act with intention when choosing to support or learn more about these practices.

Guzman, M. (2020, November 17). OPINION: Witchcraft and SANTERIA are staples OF LATINX culture, not a trend. Retrieved from https://depauliaonline.com/51442/opinions/opinion-witchcraft-and-santeria-are-staples-of-latinix-culture-not-a-trend/

Joho, J., &amp; Sung, M. (2020, October 31). How to be a witch without stealing other people's cultures. Retrieved from https://mashable.com/article/witchtok-problematic-witch-cultural-appropriation/

Lammoglia, J. (2006). Divination and Spirit Possession in the Americas. In Encyclopedia of African-American Culture and History (Vol. 2, pp. 622–626).

Shaukat, A. (2021, February 14). Whitewashing white SAGE: "WitchTok" and the appropriation of spirituality. Retrieved from http://bullandbearmcgill.com/whitewashing-white-sage-witchtok-and-the-appropriation-of-spirituality/

Sawe, B. E. (2019, June 20). What is the yoruba religion? Yoruba beliefs and origin. Retrieved from https://www.worldatlas.com/articles/what-is-the-yoruba-religion.html#:~:text=The%20Yoruba%20religion%20system%20comprises,into%20a%20robust%20religious%20system.&amp;text=Besides%2C%20every%20action%20or%20thoughts,destiny%20in%20the%20spiritual%20sphere.