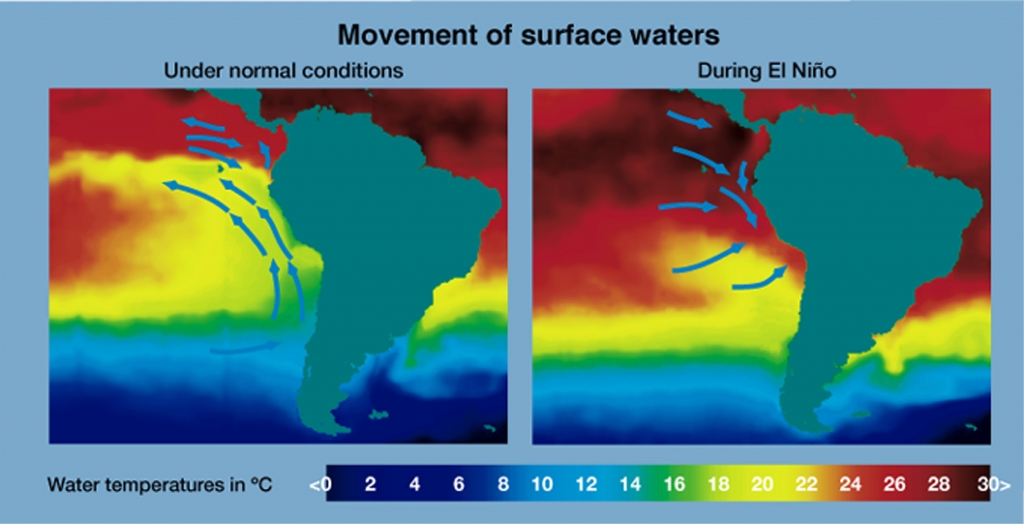 What is El Niño?

El Niño is a weather phenomenon that occurs with varying strengths and frequencies every 2-7 years.1 El Niño was originally recognized by Peruvian fishermen when there were warmer water temperatures and changes in the amount and types of fish. Today, El Niño events are predicted in a similar way: tracking a minimum of 15 months when sea surface temperatures increase more than 0.9°F.2 The phenomenon can be declared when ocean temperatures change and rainfall veers to the east.1 El Niño is caused when westward-blowing trade winds weaken on the equator which changes air pressure, and wind speed. These changes push warm surface water back eastward on the equator which causes change in more than just the aquatic ecosystems. Some effects include fish populations dying off or migrating, severe changes in the climate, droughts or excessive rains, interruption of thermal heat distribution, and diseases caused from flooding and drought.2

The 1997-98 El Niño event was the first to be tracked and monitored to completion. This gave a better understanding of what happens during an El Niño year, but predictions are still very inaccurate. Scientists do not understand what causes the event to happen, which is also exacerbated by the different ways that El Niño effects are manifest each cycle.1 During the 1997-98 event, severe droughts in Southeast Asia, heavy rain and flooding on the northwest coast of South America. The United States saw a very wet winter in California and a record breaking warm winter in the Midwest.2

Predictions for this Year’s Event

Some estimates of the economic impact of the 1997-98 El Niño was between 30 and 45 billion dollars. It’s likely that the impact will be higher this year because economies have grown in the past 18 years.3 Predictions are that this year’s El Niño will be as strong, or stronger, than the 1997-98 event. The United Nations weather agency has declared that this storm is lining up to be one of the three strongest events in the past 70 years, but that the world is more prepared.4

One of the regions that typically sees a lot of devastation due to wetter climates causing flooding is the northern coast of Peru. La Libertad is a region in Peru that had a long recovery after the 1997-98 El Niño when 72,306 people were injured and about 11,500 homes were destroyed.5 The Department of Agriculture and Risk recently gave PEN 5,678,671 (~USD 1,680,000) to fund 13 projects to combat predicted effects of El Niño.6 In addition, La Libertad participated in a large nighttime evacuation simulation to mobilize citizens and authorities about dangers and first response in emergency situations of heavy rain, flooding, and mudslide situations.7 These sorts of preventative approaches are important because The National Authority of Water has said that 17 ravines will be affected by flooding putting in danger at least 12 million residents and their homes.8 The government of La Libertad has been using past devastations to prevent and prepare for this year. During the 1997-98 event 3,000 corpses and coffins were dislodged from their graves at the Mampuesto Cemetery floating through town and landing in the Trujillo’s town center. There have been meetings to take proper precautions to remove a thousand caskets to prevent public health issues during the flooding.9