A Snapshot of the World's Strangest Prison 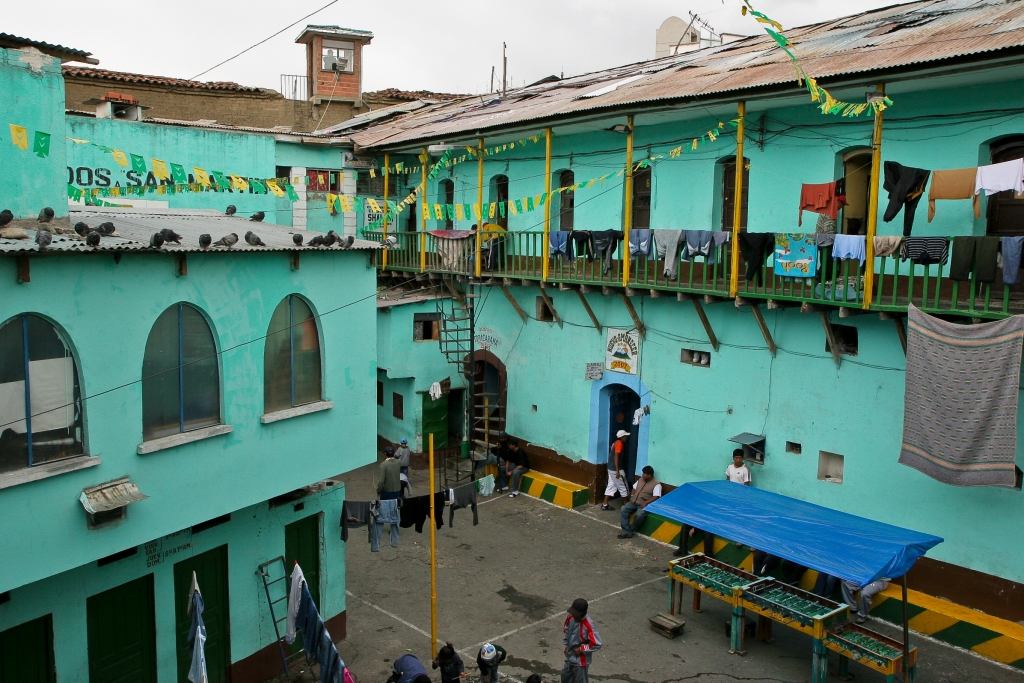 In La Paz, Bolivia there is a prison unlike any other. It is home to thieves, tax evaders, drug traffickers, rapists, and murderers alike, as well as their families. It is unique because it is largely unguarded (about 50 guards are employed to stand watch on the outside) and because it is completely community run. San Pedro is the topic of much controversy. Questions such as “Why should criminals be allowed to govern themselves and roam freely,?” as well as “Why should children live with these men?” arise.

About 1,500 prisoners have organized themselves into a well maintained society. There are restaurants, bars, barbers, repairmen, realtors, tour guides, a nursery for children, even a hotel. You name it, and it exists within the walls of this prison. When you first arrive, if you have enough money, you are able to purchase yourself a little house to live in one of the eight “neighborhoods” inside the walls; the most affluent have cable tv, a private bathroom and kitchen, and some are even said to have hot tubs and internet, otherwise you live in varying degrees of squalor. “Each sector in the prison annually elects a leader and a financial secretary who not only establishes the rules and laws within the prison, but determines how law-breaking inmates should be punished.”

Each month there are about four deaths that take place either from natural causes or from attacks. There have been reported cases of rapists and child molesters that haven’t survived more than a day before being attacked by their fellow prisoners. The system they live by dictates this as acceptable and the officials outside the walls do not interfere.

“Around 80% of [San Pedro’s] inmates are being held in relation to drug crimes” according to a report by LaPazLife.com. It is said that some of the purest cocaine in the world comes from inside of the prison and this is why touring the facility is so popular with adventurous foreigners. Foreigners will risk entering the prison, paying a bribe, and walking among the criminals, in order to try the cocaine straight from the source. When closure threatened San Pedro, this, and the less-than-ethical tours of the establishment, were some of the reasons why. Additionally, women and children who are free to come and go are a method for carrying out the cocaine business, literally and figuratively; they walk out the front door.

Families that cannot provide for themselves after their father, husband, and breadwinner has been incarcerated are able to live with him inside San Pedro. The children bring a liveliness to the prison. “‘It's tough for them here, but at least we can try to protect them and give them a sense of family. Outside they would be completely on their own,’ says the father of [a boy named] Manuel”. It is a fine line between the discrimination the families suffer outside of the prison and the danger they face inside of it.

And yet apart from the fact that these men are incarcerated, life goes on as usual, and that is what makes this facility so unique. There are no metal cells and no uniforms. If you play by the rules and have a source of income, you can live a relatively normal life.  For example, there are regular soccer matches. “Every sector has a team and tournaments are held regularly, with bets of more than $20,000 a year. Good players are sought after and signing by teams from the wealthier sections are not unheard of. ‘It is the same as outside - if you are good, you can make more money with your feet than with your brain,’ an inmate jokes” in an interview with the BBC. Another example is that of an ex-governor named Leopoldo Fernández who ran as Bolivia’s vice president from inside of San Pedro Prison and managed to come in second in the race with 26 percent of the vote. The men simply continue on about their lives.

There is much controversy that surrounds this peculiarity. Some wonder why criminals and dangerous men should be able to roam freely. But this is an ancient ideology of imprisonment that implies that they will hold themselves accountable. Yet issues still arise. In 2013 a young girl living in San Pedro was raped and impregnated by her father, uncle, and godfather. This was the last straw for many who already opposed the prison and so efforts were made to shut it down. They were going to transfer the men to other prisons but inmates protested. For a time, no new men were brought to San Pedro but after the closure of other nearby prisons, San Pedro has remained open.

Apart from the online accounts and videos of tourists, this peculiar prison has been documented in the book Marching Powder by Rusty Young and Thomas McFadden (a former inmate) The book is about Young’s tour of the prison, its operation, why foreigners might want to venture inside, and the people he personally met inside. The rights for a film have already been bought by Brad Pitt’s production company to feature 12 Years A Slavestar, Chiwetel Ejiofor as McFadden.