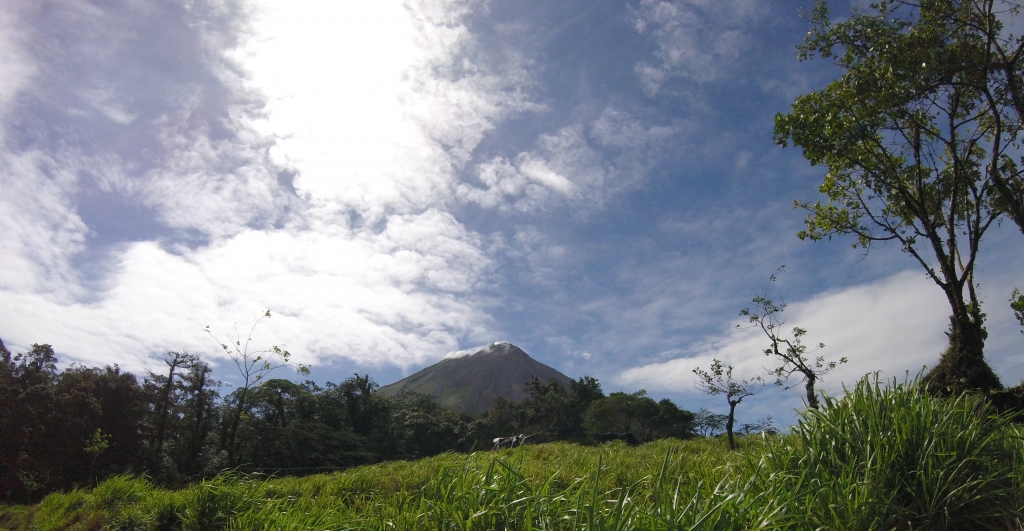 This past weekend I had the opportunity to travel off campus from my university in Heredia, Costa Rica and see the beautiful town of La Fortuna including the breathtaking Volcán Arenal in the Northern lowlands. Arenal is a 5,437 foot tall stratovolcano that formed about 7,000 years ago from what was the now extinct Chato Volcano.  After a dormant period that lasted 400 years, in 1968 Arenal began its next eruptive phase; the explosion that marked this shift covered three villages, and sadly 87 people were killed (arenal.net 2015).

The volcano is one of 66 in Costa Rica, and until 2010 it was the country’s most active one.  Now, although visitors can no longer see molten lava flows, the volcano is still a jaw dropping sight, especially because of the steam that is continuously emitted from the top.  It has also created a number of hot springs due to the geothermal activity beneath the volcano, adding to the incredibly diverse landscape in La Fortuna.

Another feature of this terrain is the La Fortuna waterfall.  It is impossible to not be taken aback by its size (70 meters in height) and its power (Fortuna Welcome 2017); visitors are able to swim further downstream from the waterfall, but I found it was a bit of a challenge to beat the current for more than a few seconds. Compared with the rolling pastures that surround Volcán Arenal, the waterfall is tucked into a tropical rainforest.  Beyond these two dramatically distinct landmarks, La Fortuna is a beautifully biodiverse area, and the town has worked to celebrate and preserve this aspect.

On Saturday I was able to visit Arenal Vida Campesina, a family-run, all organic sustainable farm in La Fortuna.  My guide and one of the owners, José, explained the extent of the capabilities they have due to the lucky location; in just about 19 square acres the farm has 151 different plant species. There is promising evidence to suggest that La Fortuna will be able to remain the tranquil, beautiful area it is for a long time.  José explained that in 1993 the government divided a large plantation into smaller plots, and families like José’s were able to buy them for their use at lower prices.  The initiative was meant to keep the land in the hands of Tico families and promote more sustainable growing practices.  In addition, all of the family farms sell the products of their hard work locally to other businesses and even to individuals in the town in a market held every Friday, helping to sustain the local economy.