Church and Revolution in El Salvador: Padre David Rodriguez and the Parish of Tecoluca

Although the civil war in El Salvador started in 1980, after the FMLN was formed, the conflict began one decade earlier, in 1970. This was the year when the Legislative Assembly held a congress to discuss land reform, Father “Chencho” Alas was kidnapped right after he gave his presentation at the congress, Father Nicolás Rodríguez was murdered by reactionary forces (the first priest to be murdered by reactionaries), and Archbishop Luis Chávez y González held the First Week of Pastoral reflection for the purpose of applying the pronouncements of Vatican II (1962-1965) and the CELAM Conference of Bishops (1968), held at Medellin, Colombia. It was in 1970 that the conflict between the Salvadoran Church, which began to promote the preferential option for the poor, and the oligarchy, which wanted to keep its monopoly on economic and political power, began in earnest. The two politico-military organizations that would become the most influential of the five groups that composed the Farabundo Martí National Liberation Front (FMLN) – the FPL and the ERP – also emerged in 1970, but in that year they were tiny organizations with little or no resources. At the same time, priests and nuns in the Salvadoran Catholic church began to “awaken” and organize the poor to fight for their political and economic rights.

In “Ideas and Leaders in Contentious Politics: One Parish Priest in El Salvador’s Popular Movement” (Journal of Latin American Studies 46, number 4, [2014]), I show that religious leaders in El Salvador, armed with the revolutionary ideas generated by Vatican II and the Medellin Conference, were instrumental in the development of a powerful, revolutionary Christian movement, that then grew to a wider popular movement, and eventually provided crucial support and personnel for the politico-military organizations that made up the FMLN. Without the work of these bold religious leaders, the popular and revolutionary movement in El Salvador would not have become as powerful as it did.  I examine the life of one important priest - Padre David Rodríguez – in one important parish – Tecoluca – to present my arguments. The primary evidence for the article are in-depth interviews with Padre Rodríguez and with just over 100 people who have known him, as well the files of the parish of Tecoluca, dating from 1972-1977.  These files were copied by the other parish priest, Rafael Barahona, when he left the country in 1980, just after the assassination of Archbishop Romero in 1980.

Although Padre David Rodríguez was just one priest, in just one parish, his experiences are representative of what many priests and nuns went through in El Salvador after the 1970 Pastoral Week let loose a liberationist pastoral mission in El Salvador. The organizational work of Fathers Rutilio Grande and “Chencho” Alas are already well documented but they were only two of a small army of priests and nuns who also formed base communities, trained leaders, and promulgated liberationist ideas. In El Salvador, 183 church leaders attended the Pastoral Week and those leaders then influenced other leaders, organized base communities, and formed many lay leaders. The result was a network of leaders that fueled the growth of the Christian and popular movements in El Salvador. Consequently, when radicalization began to spread in 1975, many lay leaders and even some Church leaders, like Padre David, joined, or supported indirectly, the revolutionary movement. The experience of Padre David Rodríguez in the Parish of Tecoluca helps us to make a few assertions about the rise of the popular, Christian movement in El Salvador.

First, the ideological changes that came to the Salvadoran Church in 1970, to a large extent, emanated from abroad. Church leaders in El Salvador were “converted,” or galvanized, by the new ideas that emanated from Vatican II and the Medellín conference. These liberationist ideas, promoted by some foreign priests in El Salvador – like Juan Macho and Bernard Boulang – resulted in a new pastoral that was sanctioned by El Salvador’s Archbishop and was formalized at the First Pastoral Week of Reflection in 1970. These ideas, of course, would not have had an influential impact in El Salvador if the Archbishop and many Salvadoran priests and nuns had not been receptive to them. Even with several key bishops, like Pedro Aparicio, in strong opposition to the new pastoral, a small army of nuns and priests put them into effect with tremendous results.

Second, progressive church leaders were vital for the emergence of El Salvador’s popular, mostly Christian, movement. Once they embraced the new pastoral, Catholic leaders enthusiastically promoted a new injustice frame, trained lay leaders, and organized the poor. Church leaders were particularly successful since they came from a highly respected institution and thus the poor of El Salvador trusted them. While emotions may have been at work, the poor of El Salvador were completely rational in listening to a liberationist priest, who represented the Church, rather than an atheistic Marxist.

Third, the actions of Padre David, and others, suggest that Church leaders began mobilizing Salvadorans for contention well before other opposition and revolutionary groups. Liberationists carried out their training and organizational activities during 1970 to 1975 when the politico-military organizations were still small and weak and the political parties, even the communist party, were still hopeful that they could attain political power via elections. Although some opportunities had existed for opposition parties in the 1960s, those opportunities were nearly obliterated in the early 1970s, owing to electoral fraud. When the opposition parties began to contest the legitimacy of the state in 1980, and joined forces with the FMLN, the Christian contentious movement had been around for a decade.

Fourth, although leadership was crucial, the circumstances that led to the Church’s doctrinal changes and the new pastoral adopted by progressive priests and nuns had a great deal to do with the injustice that reigned in El Salvador. These doctrinal changes, beginning in the early 1960s, were precipitated by the crisis the church was experiencing in the region in that decade – economic injustice experienced by parishioners, and the challenges from Marxism and Protestantism.  More specifically, the economic injustice in El Salvador intensified in the late 1960s and early 1970s, making widespread contention increasingly likely. Once the church embraced the “preferential option for the poor,” some priests and nuns in El Salvador, aided by Archbishop Chávez y González, fully endorsed a new pastoral that quickly (within five years) led to the development of thousands of lay leaders who in turn mobilized thousands upon thousands of poor Salvadorans. This political mobilization furnished the organizational strength that the FMLN employed in the 1980s to almost bring down the Salvadoran state. 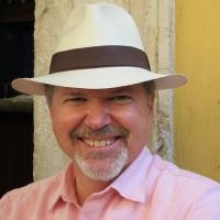 Peter Sanchez
Peter M. Sanchez is professor and graduate program director in the department of political science at Loyola University Chicago. He is the author of Panama Lost? US Hegemony, Democracy and the Canal (University Press of Florida, 2007), and the forthcoming Priest under Fire: Padre David Rodriguez, the Catholic Church and El Salvador’s Revolutionary Movement (University Press of Florida, 2016). He lives in Evanston, Illinois.