Living in Brazil as a Third Generation Japanese: Interview with Emy Takada 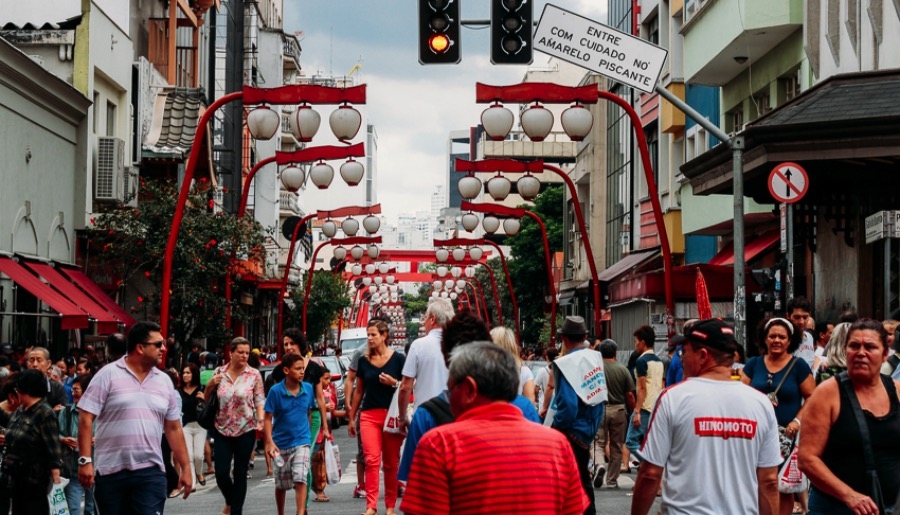 Emy Takada is in her fourth year of doctoral study in Hispanic Languages and Literatures while pursuing a certificate in Film Studies. She has taught Brazilian cinema, currently teaching Spanish Grammar and Composition and Conversation. Emy’s family has been in Brazil for three generations. The following interview explores her experience growing up in Brazil as a decedent from Japan, the history of her family, and the differences between Brazil and the United States.

Could you tell me a little bit about your family history? I know you’re third generation right?

Emy: Right, so third generation meaning that my grandparents immigrated. So my grandparents immigrated in the beginning of the 20th century. My mom’s grandfather was the first one who immigrated to Brazil and he got married in Brazil. The deal the government said, back then, was that Japan was going to provide the labor force, and Brazil was going to accommodate all these people and the deal included bring family with them to Brazil. Because the Brazilian government wanted to make sure it wouldn’t all be male single men who would come and leave. But if they brought their families, they would stay. It was kind of like a settlement.

Ah, okay so I guess the Japanese were more…?

Emy: They were more “submissive”. That was taken into consideration because the Italian immigrants who were there before, they were the ones who started the unions and rebelled.

So why did Brazil go to Japan and not another country?
Emy: It was actually Japan that went to Brazil! What happened is that Japan as a tiny little country, however, the countryside population was big. But the country people made money mostly from working on crops, but when machinery was implemented in Japan, a lot of these country people didn’t make as much money so they migrated to the cities and the cities became over populated and could not accommodate the laborers who did not have jobs. So they had to look for ways to, in a way, find another place for these people.

It was kind of mutual, especially in this era of planation because the Japanese had a lot of knowledge of crops and they were sent straight to the country in Brazil to work in the coffee fields.

So my grandparents, my mom’s grandpa, he never worked on the crops because he did office work, but my grandma did and all of her siblings and her parents were sent to work in coffee fields. On my dad’s side, my grandpa, he came to Brazil as an adventurer he came by himself.

So, he just randomly wanted to go to Brazil?
Emy: Yeah well, he was like, “All these people are going to Brazil, and I’ll go check it out.” So much so that he went by himself. But when he turned 40 he didn’t have a wife, so he went back to Japan to find a wife. And it was an arranged marriage, he married someone 15 years younger, and he took her by herself back to Brazil. So you could imagine what kind of relationship they had. They lived in São Paulo.

So for me, I don’t really have a picture of what it is like in São Paulo. Could you paint a picture of what it is like for someone who hasn’t been there?
Emy: It used to be and still is, in a certain way, very secluded, very segregated, but the community segregated itself. I think one of the reasons why is, and this is just my guess, Japan is an island so they were not used to having relationships with other cultures and other people. When there were hundreds of thousands of people who were just displaced into designated Japanese communities with Japanese schools, translators, they didn’t even have to learn Portuguese. They didn’t need to, so they were able to maintain the culture and their religious practices. The food, the traditions, the rituals... all of that. And not only that, but all of the Japanese way of life was all maintained. SO much so that when I went to Japan, after college, I went to Japan for one year and I spoke the Japanese that I learned from my grandparents and everyone in Japan thought my Japanese was old, because I had learned from my grandparents. I couldn’t speak the modern Japanese, I didn’t know the slang or American words assimilated in the language. They made fun of me.

From your experience, how much would you say that the Japanese Brazilians feel a part of the Brazilian culture? You said it was more segregated, but what about now? Is there more mixing of culture or not so much?
Emy: I think in São Paulo, where the largest Japanese population is located, I would say that until my parents’ generation, my parents did not have any friends who were not Japanese. Now my generation is different. My parents went to college in Brazil and all that, but in college they would only hang out with other Japanese people. My generation was more open, but still segregated. I was only able to open up completely, since I’ve always been interested in different cultures, when I left. If I go back to Brazil now, most of my friends are Japanese. Although a lot of them are married to non-Japanese people.

And how is that viewed?
Emy: My generation is fine, but my parents’ generation not so much. The funny thing is that we already have a six generation in Brazil of full blooded Japanese. Can you imagine in Brazil where you are exposed to all different cultures and races, and you still are able to maintain so much of the culture.

So I know that Brazil is very multicultural, but how do you think they deal with people of different cultures differently from people in the United States?
Emy: It’s not that different. I think both countries [have their own racism].

What are some discriminations that Japanese Brazilians…is that the term they go by?
Emy: In Brazil, non-Japanese people call us just Japanese.

So what kind of discriminations do they experience there?
Emy: I think it is more among the least educated people. I think before it was among educated people as well just because they were not used to different races and they didn’t know how to deal with them. It’s what happens in Pittsburgh, it’s so white but then there are a much of different kinds of people who are still trying to figure out how to behave. So it is very similar in that sense.

So you don’t experience that in Brazil now?
Emy: No, it is less, although there is some kind of disguised discrimination, but you have to behave closer to social norms because there is still a sort of expectation for society. But if you think of blacks and browns, I think there is much more discrimination towards them. And it has to do with class. Because the Asians came to Brazil and they worked really hard and rose up the social hierarchy very quickly. Unfortunately, I don’t think I could say the same about the black and the brown people in Brazil.

So in the United States, as a Chinese American, I frequently get the question, “Where are you FROM?” is that a question that gets asked a lot in Brazil?
Emy: No, not in São Paulo because there are so many of us. And they will assume if you were in São Paulo that you were Japanese. Because the Chinese and Korean population is very small. I think you would be called Japanese which is essentially the same as saying “Asian.”

How does identifying yourself in the US, differ from identifying yourself in Brazil?
Emy: I think here I identify myself more with both ethnicity and nationality than in Brazil. In Brazil, I would identify with my ethnicity. Because here there are two layers. The place where I grew up and my ancestry. And it is really confusing because the same question you have, everybody else has because nobody knows there are Asians in Brazil. Most Americans think the Brazilian population is black.

It is very dark in the north and as you go south it gets lighter. And if you go deep south, it is very light and somewhere in between where the industries, education, research, and opportunities are you find the Asian population. Not only did they want to take advantage of the area, but they are also a huge part of building it.

Do you know any people who were Japanese and lived outside of the community?
Emy: There are, but they were frowned upon. They were secluded, well I guess they were more open to live among the Brazilians. But because of that they did not have a place inside a community. They were seen as outsiders.

So outsiders to the Japanese community and the Brazilian community?

Emy: They had to deal with it, so they would be accepted to the Brazilian community. Strangely enough, I had the impression that it was usually people who were less educated.

Emy: Because what the Japanese strive for, they want to be respected and honored. And the only way to gain that is to show what you’re able to produce and accomplish. So there is some unwritten norms that you need to know about Japanese tradition, how Japanese person should behave and you have to know about values like family, education and work. Basically that. If you are a party person, okay, what is wrong with you? You shouldn’t have time to party, there is too much to work for. Because we have to move up, that was the mentality.

The Japanese who worked in the coffee fields worked so hard so they could send their kids to the city to get educated. The pressure was so high that the kids had to go to the best universities and to be admitted they had to work their [butts] off. And they did. So my parents’ generation went to college and half of their colleges were Japanese.

When I came to the United States, I asked what I want to do research on. And interesting enough I went back home and investigate about Brazil.

What did you specifically research?

What did you find?

Emy: The main thing that I found is that we are marginalized in cinema. And there isn’t much interest on it, first because the cinema itself is marginalized.