An Interview with Dr. Maureen Porter

Dr. Maureen Porter has always been surrounded by indigenous cultures. Some of her favorite memories were going on outings with her diverse extended family. She explained how going out in public with her entire family was always a unique experience because of how much attention they got since most of them “look Nordic, Dutch or German, but some are adopted Korean, adopted Native or buried in Native.” Her interest in indigenous education expanded when she had the opportunity to start working with indigenous scholars. From working in the Minnesota Department of Education where she often partnered with the Central Office for Native Education, to her time spent studying anthropology and education at Stanford University, she was able to gain a understanding of the problems and successful solutions within indigenous education. Now she is an author and editor of the anthology Indigenous Education: Language, Culture and Identity, with her colleagues W. James Jacob and Seng Yao Cheng in the University of Pittsburgh’s School of Education. She sat down with me to discuss the book and her lifetime of work with indigenous education. 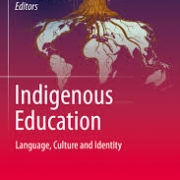 The authors chose to focus the anthology on three main topics; language, culture and identity. According to Porter, the three of them all worked to “get a variety of authors and areas of expertise such as linguistics versus policy versus cultural reform to top- down reform or bottom-up reform.” The first part of the book, however, analyzes the major issues that cross language, culture and identity, globally. Porter explained that the compiling process is not as easy as it may seem, “[we had] to negotiate what goes in and how it gets framed. Do we use ‘native’ or do we use ‘indigenous?’ The three of us had to agree on everything and we tried to put in the book why because someone out there thinks the opposite. We had to make a case for our choices and acknowledge that they were conscious choices.”

Despite the complicated themes of the book, Porter is adamant that the work has something for everyone. She reiterated that “a total beginner could find something fun  as well as someone who has been thinking very deeply about it or even someone who wants to know something in depth about a particular case and compare it to very different geographic region.” She hopes that the book will help more people understand that “native people are still here and they will be here so even though we tend to ignore them and make them invisible, that's not true, they are here thriving and surviving.” She admits that there is a lot of misunderstanding and widespread misinformation surrounding indigenous populations. One of the incorrect assumptions about Porter’s work is that her goal is to preserve native culture. She wants people to understand that the goal is “not preserving it [indigenous culture], as it was never singular and never static.” She instead tries to present indigenous culture as “a living, dynamic, constant, cutting edge way of being in the world”.  She instead encourages “making visible all of the contributions that have already been made and all the things we could do if we just acknowledged each other now.”  She hopes that the anthology will encourage readers to “celebrate with [indigenous communities] the things they are triumphing in because there are some pretty resilient folks out there. They have a lot to teach us, especially things we need to learn, things that our own cultures once valued.”

In her own section of the book, Dr. Porter drew upon the 10 years she spent researching and co-leading service learning programs in Bolivia and Peru. Her chapter stands out because her comments on language and culture are framed by personal stories from Peru. According to her, these stories “tell you a lot about the relationships and what it means to be present, mindfully and fully, in the field with people over a long time.” During these 10 years she took over 120 students to help build schools, community buildings and bathrooms all the while doing research projects in collaboration with the local population. These projects ranged in topic from language revival to indigenous dance and creating multilingual curriculums. Porter credits these trips for helping students experience indigenous culture firsthand. Since then, many of Porter’s students have gone on to do masters theses and doctoral dissertations as well as work with indigenous communities. Porter believes that students who have gone on this trip “have a more nuanced idea of what it means to be an ally when you don’t come from those groups.”

When asked what individuals can do to spread awareness of indigenous culture and issues, Porter had endless suggestions. Her first suggestion was to seek out indigenous authors and creative websites because, as she explained, “If the author comes out of the tradition themselves and is grappling with the legacy and the implications and the theology, there is a real depth and groundedness to it.” She advises every person to seek out firsthand accounts of native life and that “just sitting and listening humbly and saying ‘I don’t know everything, please teach me where you are coming from” can go a long way.  She also focuses on the many possibilities for outreach and understanding that are available in Pittsburgh, especially to University of Pittsburgh students. She encourages participating in a study abroad program that includes a focus on indigenous populations or participating in a Headstart Program or Jumpstart program at one of the Native American sites for the Council of Three Rivers Indians. Just across the street there is also the Carnegie Museum of Natural History which houses the Alcoa Foundation Hall of American Indians where students can learn and engage in a dialogue about Native American lives in the U.S. The popular establishment Conflict Kitchen which sells food from countries that the U.S. is currently in conflict with, has started selling food inspired by the Haudenosaunee Confederacy.  Participating in the discussion events and reading the informational packets are other ways to raise awareness of indigenous cultures. Porter says that a renewed partnership with the museum is in the works and so are more events with a focus on indigenous populations and education. Stay tuned for more related events, but in the meantime you can find Porter’s book Indigenous Education: Language, Culture and Identity for purchase or download on Amazon.