Why Brazil still an outlier in women’s in political power? – looking inside a group of aspirants 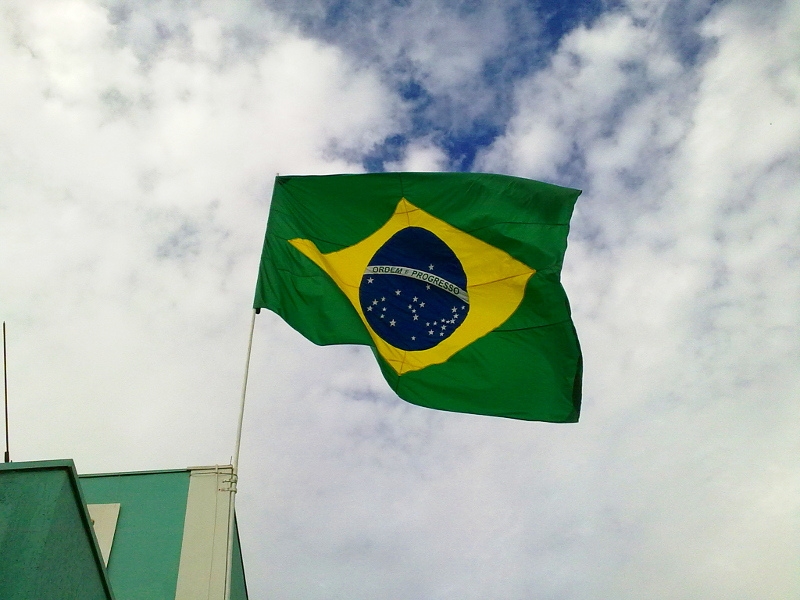 Brazil is one of the countries with the lowest rates of female representation in political power. The report of the International Union of Parliaments (IPU) shows Brazil in 151th position (in 193 countries). The representation in the Chamber of Deputies meets only 10%. The proportions are also low in municipalities and state level governments. Currently, there is just one women as a governor (among 27) and, in 2016 elections, women were just 12.57% of the candidates for mayors.

In Latin American, Brazil is unequivocally an outlier. Other countries that share similar institutions and social and economic aspects as Brazil –  such as the time of women’s right to vote, proportional electoral system, machismo, existence of quotas etc – present representation rates higher than the Brazil (average 28%). Among the 20 best countries in women’s representation are Bolivia, Cuba, Nicaragua, Mexico, Argentina and Ecuador.

Concerning Brazil, there isn’t enough explanatory variables which can describe the absence of women in office. We know there is a problem in the quota’s design, the high impact of campaign spending, as well as to have had a previous mandate. The las two ones have a huge impact on the chances of a candidate (male or female) been elected. High campaign spending is a central explanation for the probability of victory.

In recent years, women's and political studies in Latin America have focused their efforts on understanding the impact of quotas in the various countries of the region, giving less attention to the internal dynamics of recruitment and parties. Such a lack of literature would eventually ignore the fact that the parties act by repressing intentions and controlling positions of power.

One of the ways to do it is precisely observing women who have a potential interest in politics; their profile and their trajectories.

Given the innumerable amount of people with distinct profiles who may want and decide to run for office, the study of individuals with political skills has never been easy to be done. Some researchers have done experiments with groups with professions more related to candidacy (such as lawyers, for example).

However, this research could count with an unpublished survey did with women aspirants, which can help to map some aspects of their profile. It was answered by 531 women who participated in the Seminar "Women in Politics ", held in the first semester of 2016, taught by Universidade Federal Fluminense (UFF) and financed by the former National Policy Secretariat for the Women (SPM).

The three-day intensive course was taught in 14 large and medium cities located in states in all regions. About 900 women from different party affiliations participated in the training. These students were recruited by the Women's Policy Local Secretariat (OPM) and the pre-condition to participate was to have an intention to running for municipal elections - whether for councilor or mayor - or for the coming years.

The survey, answered at the end of the course, contains information on aspects such as age, marital status, children, education, but also refers to some political issues per se, such as having a relative as a politician or joining a social movement.

The highest percentage of female participants (31%) were, at the time of the seminar, between 41 and 50 years old; the second largest group (25.8%) was concentrated in the 31 and 40 years old. 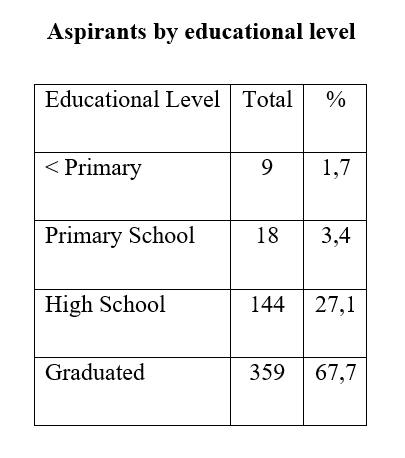 Of the total of the women responding, 67% had finished college. This percentage is well above the national average (around 20%). Looking inside the data, we notice that these rates are higher in the two big states. In São Paulo, 82,5% of the women finished college 73,5% of the Rio’s participants. Most of them (91%)have a paid work.

Regarding their marital status, 56% answered that they did not live with a partner, 29% reported being single and 44% were married. Only in 3 of the 14 cities, married women were the majority: Rio Branco, Manaus (both in the Amazon - North Region) and Teresina (Northeast). São Paulo and Belo Horizonte presents the lowest scores. 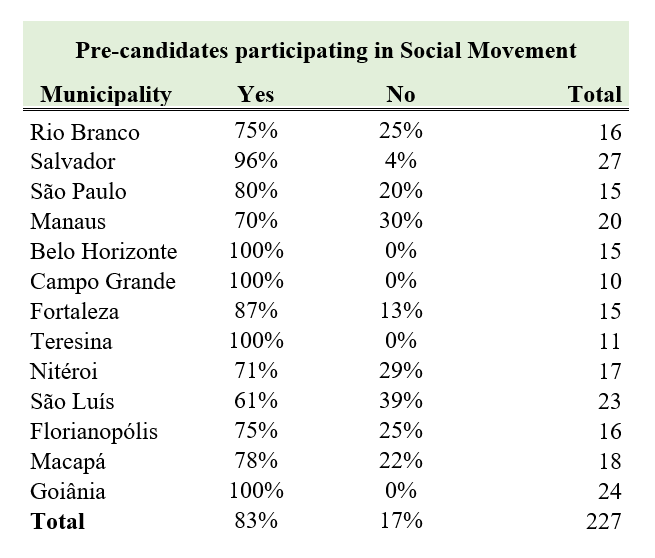 The vast majority have children: 83.4%. Of this group, 60% have children over 14 years of age. From this information we can infer these women are well educated and have children. Politics are not their first occupation. It seems that they fit this activity in their very busy and demanding life.

There were 77% women who answered they participated in social movements; while 29.2% reported having relatives in politics (in most cases, 37,5% were cousins).

Even at the end of the course, only a third of the respondents said they wanted to run in that election (municipal elections, 2016), but the percentage rises to 47.2% when asked about the upcoming elections.

Among the ones who decided to run for office, 30% of them have relatives in politics and 83% participates in social movements. This percentage variates a lot, but it is always much higher than 50%.

We will use the survey data to try to map factors that make the intention of the candidacy more prone to women in this group. Initially, we identified that participating in social movement is a statistically significant variable for them to decide to apply. 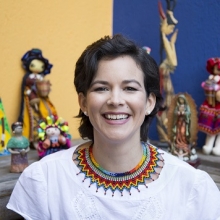 Debora Thome
Visiting Scholar at Columbia University. PhD Candidate at the Universidade Federal Fluminense (Rio de Janeiro - Brazil) studying women potential candidates and representation in politics. I am also working in papers about recent feminist protesters profile in Brazil and corruption and media bias. Beyond my research, I have been an activist of women’s rights in Brazil, speaking in various conferences about feminism and organizing cultural activities and pro-abortion advocacy groups. I have trained more than 300 women from all over the country planning to run for office in a program of the Brazilian Government Agency for Women’s Policy. In my master, I studied Conditional Cash Transfers and policies to reduce inequality. I have published a book about women and power in Brazil and a children's book about Brazilian women leaders.