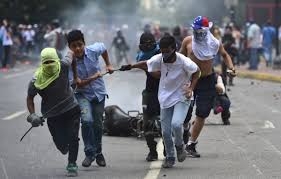 Exultant after the results of the election for a Constituent Assembly became public, on the late night of July 30th, president Nicolás Maduro announced the end of his regime’s benevolence towards the opposition (se acabó lo que se daba), anticipating that the process of constitutional reform will provide the occasion for chavismo to settle all scores (se cobrará todas las cuentas). It took him 24 hours to start delivering on his promise: on the early morning of August 1st, the Bolivarian Intelligence Service (Servicio Bolivariano de Inteligencia, SEBIN) interrupted the home arrest of Leopoldo López and Antonio Ledezma, two prominent leaders of opposition forces, who were returned to prison. The measure prolongs a steady escalation of violence by the Maduro administration, so far having insinuated no interest in opening a space of negotiation towards a regime change, neither in at least relaxing the repression of an opposition that has denied all legitimacy to the initiative of constitutional reform.

In response to a month of massive protests against the government, Maduro decided in May to promote a constitutional reform with the purpose of replacing the legislature with opposition majority elected in 2015 with a constituent assembly controlled by loyal representatives. In order to secure the outcome, the government manipulated the electoral rules, assigning itself one third of the assembly in advance, and distributing seats in a way that over-represents its electoral strongholds. Opposition forces, coalesced in the Mesa de Unidad Democrática (MUD), responded to the skewing of the rules by abstaining from participation in the election, promoting instead a referendum that, although not authorized by the government, took place informally on July 17th. Around 7.2 million citizens, according to the estimates of the organizers, casted a vote to express their opposition to Maduro’s regime. Almost 8.1 million citizens, representing 41.43% of registered voters, expressed their support for the constitutional reform on July 30th, according to official sources. While the MUD calculated 12%, a poll of voting centers organized by Torino Capital (an investment bank) situated the number of effective voters between 3.1 and 4 million.

In the context of a series of governmental measures to control the mobilization of voters, at least 12 people were killed in confrontations between police and opposition demonstrators. As a reaction to electoral fraud and general lack of guarantees, governments of multiple countries have denied legitimacy to the election, thus accentuating Maduro’s international isolation. Within the region, Argentina, Canada, Colombia, Costa Rica, Mexico, Paraguay, and Peru, expressed disconformity with the process, the United States imposed economic sanctions, the General Secretary of the Organization of American States denied recognition to the Constituent Assembly, and the European Union works in a unified position of its 28 members. Venezuela had already been suspended by the founding members of Mercosur due to failure to meet membership requirements.

Both government and opposition have declared their intentions to persevere with strategies that provide no room for negotiation. The National Assembly, whose installation is scheduled for August 3rd, is expected by the executive to dissolve the existing legislature with opposition majority. Representatives of the latter, in turn, have declared their intention to continue their work. Revocation of parliamentary immunity for legislators critical of chavismo is among the multiple threats voiced by the president these days. An escalation of political repression should not be expected to bring any sort of political stabilization –not to speak about democratization.