Updates in the Colombia-FARC Peace Deal 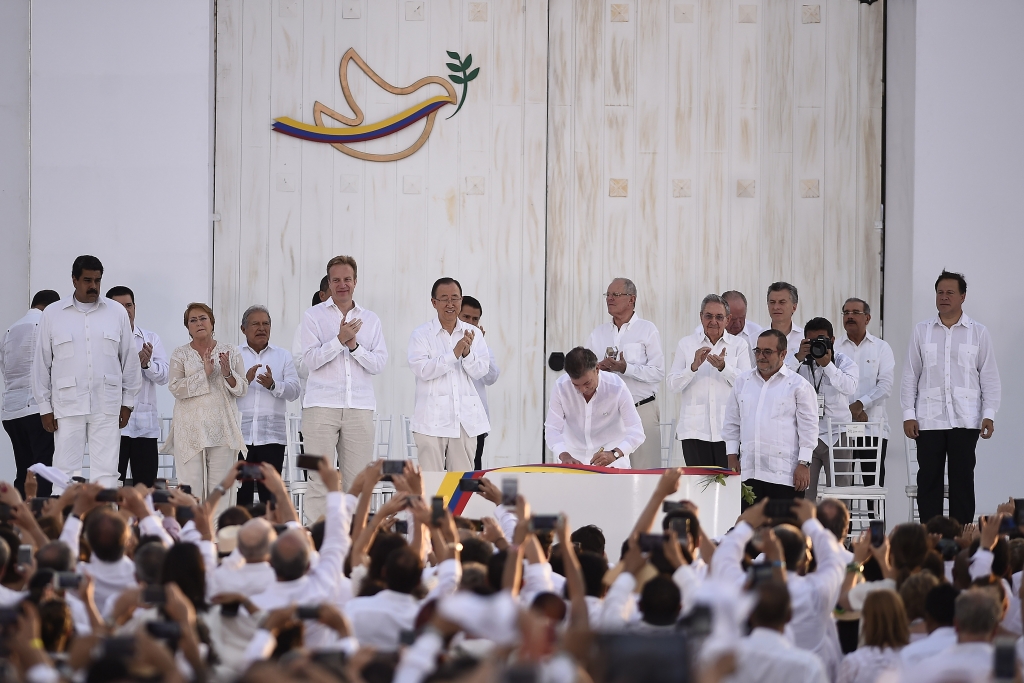 After decades of political dissent and violence between the Revolutionary Armed Forces of Colombia (FARC), led by Rodrigo (Timochenko) Londono Echeverri as of 2008 and the Colombian government, currently lead by President Juan Manuel Santos, five years of peace negotiations proved worthwhile as the two political rivals reached a revised peace negotiation (Romo, 2016). According to the agreement, the FARC Rebels would each be distributed 3 hectares of land, food, and water to help them adopt healthier living habits. Additionally, 10 seats in Colombia’s Constitutional Congress would be guaranteed to the FARC in the upcoming elections as well as the creation of 16 temporary electoral districts in lands previously underrepresented by the government (Manuel Santos Calderón, 2016). These changes would help to make political participation realistically attainable for those who had felt oppressed by a lack of voice in politics.

Despite a seeming resolution to a decades long period of violence and political unrest, the peace deal continues to delay. What was dubbed a “fast track” to peace was overruled in May of 2017 with a 5-3 vote by the Colombian Constitutional Court to eliminate many of the key aspects to a swift implementation of the peace deal (Advocacy for Human Rights in the Americas, 2017). Humberto de la Calle, a Colombian lawyer and politician appointed as Chief Negotiator in the Colombian Peace Process, expressed his concern about the Constitutional Court’s consideration, calling it a “scam” and that it “opened the door to a cascade of modifications to the agreement” (Peño, 2017). This is not the only instance in which the year long peace deal was demoted. In October 2016, the deal was opened to the public to be ratified into effect. However, Colombian voters rejected the deal by 50.2 to 49.8 percent. Many Colombians voted “no” on the deal because they felt that the FARC Rebels were not being punished for their crimes and were being given resources that peaceful Colombians were not able to acquire themselves. Others voted against the deal for fear that the FARC would not disarm and would instead use the negotiations as an opportunity to regroup (BBC Latin American & Caribbean, 2016a). Following the referendum, President Santos and Timochenko signed a revised peace deal which was passed by the Congress several months later. President Santos explained that the new deal more thoroughly addressed the concerns of those who had voted “no” in the referendum (BBC Latin America & Caribbean, 2016b). Still, small steps in the execution of the deal proved insufficient to permanently satisfy both the FARC and their political oppositions.

In March of 2017, members of the FARC began disarming in several designated disarmament zones under UN supervision. A large majority of the FARC rebels disarmed peacefully, expressing hope to reunite with family and enter a new age of peace (Al Jazeera News, 2017a). Despite this major step towards peace, several rebels have broken off from the FARC, with intent to exploit methods they used in the past 50 years such as drug trafficking and extortion to further enrich themselves for personal gain (Otis, 2017). In addition to this, many members of the Colombian government and the FARC are dissatisfied with the manner in which the peace deal is being implemented. The opposition party accuses the FARC of taking too long to disarm, a process that would take six months according to the deal, and the FARC blame the Colombian government of not providing the necessities promised to them as they leave their rural camps for the city (Kraul, 2017). Iván Duque, one of the main opponents to the Peace Accords, initiated a reconsideration by the Colombian Congress of the peace deal. The reconsideration on May 17th 2017 resulted in the elimination of the “fast-track” aspect of the agreement (Advocacy for Human Rights in the Americas, 2017). This will not undo the laws already passed as part of the deal, but the decision may weaken the expected stability of the agreement.

Although the future of Colombia’s peace deal is uncertain, strides toward peace are being made by many FARC and non-FARC citizens. In August 2017, FARC delegates met together to decide on political representatives to fill the ten seats allotted to them by the revised peace deals (Al Jazeera News, 2017b). The former rebels have also decided on a new name and logo for their party as they transition from a militarized regime to a political party guaranteed representation in congress. Although the party will keep the acronym “FARC”, it will now stand for Common Alternative Revolutionary Force (Barajas, 2017). The timing of this transition coincided with Pope Francis’s visit to Colombia in early September, urging the people to accept peace (Casey & Abad, 2017). Although he did not specifically mention the peace deals, many hope the pope’s visit will encourage a swift conclusion to the debate surrounding the agreements.