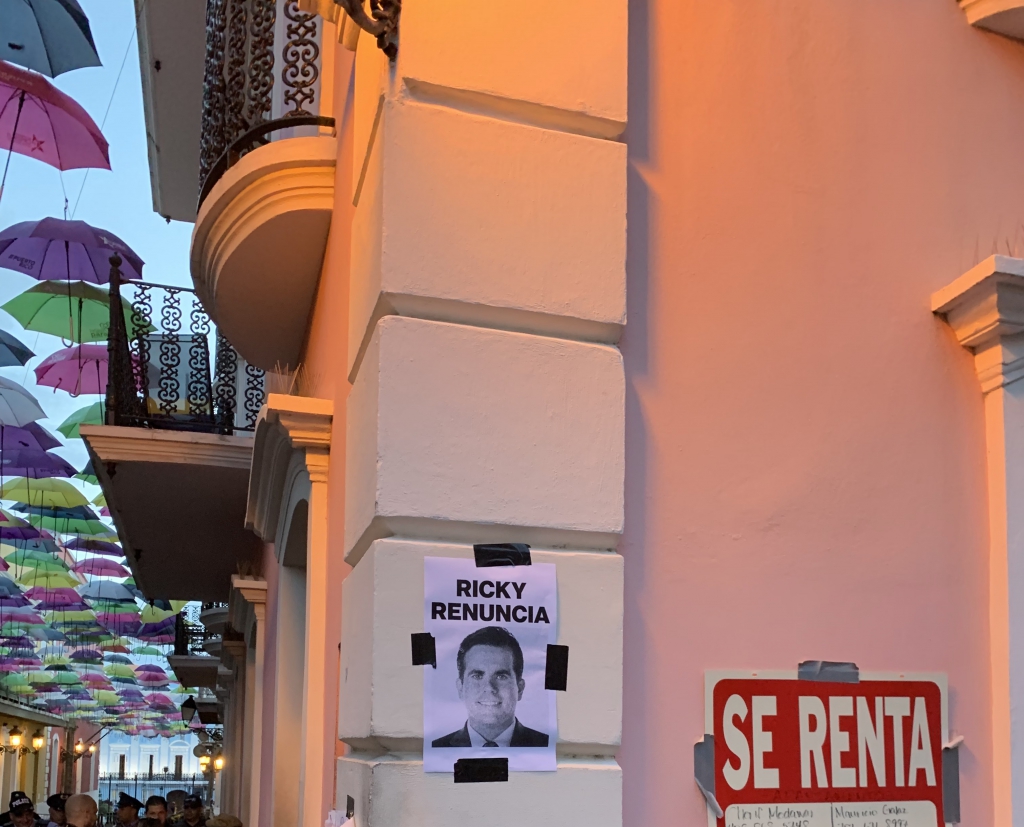 This past summer in Puerto Rico, historic protests by the Puerto Rican people showed that the power truly lies with the people. Early in the summer, Puerto Rican governor Ricardo Rosselló had nearly 900 pages of homophobic, sexist, and other pejorative messages on the application “Telegram” exposed in a security leak. The messages, shared between Rosselló and his inner circle of government officials insulted “women, gay people, [mocked] everyday Puerto Ricans, even vicitms of Hurricane Maria” (Allyn, 2019). Commenting on the scandal, Rosselló argued that the messages are just a part of his right as a Puerto Rican as his freedom of speech, the same rights that all Puerto Ricans have, to create memes and other things of the sort to express feelings (Centro de Periodismo Investigativo, 2019). These feelings however, came at the expense of thousands of Puerto Rican citizens, and exposed prejudice in the minds of some of the Puerto Rican government’s most influential political figures such as the island’s Chief of Staff and the head of the island’s Federal Affairs Administration. Extremely offensive and derogatory comments made openly amongst government officials illustrates an inappropriate abuse of power.

The protests were filled with Puerto Rican everyday people and celebrities. Among notable attendees and activists of the movement were Lin-Manuel Miranda, a mainland United States citizen with Puerto Rican heritage, Bad Bunny, a Puerto Rican rapper and musician, and Puerto Rican singer Ricky Martin, who was mocked in several of the messages that had been exposed. Many American political figures also took a stand against Rosselló and his administration such as the mayor of San Juan, Puerto Rico, Carlen Yulín Cruz, Representative Alexandria Ocasio-Cortez, former Secretary of Housing and Urban Development Julián Castro, and American Senators like Bernie Sanders and Elizabeth Warren among others.  As nearly half a million Puerto Ricans took to the streets each day of the protests, the chant “Ricky Renuncia” or “Ricky Resign” in English became the cry of the movement. A massive amount of pressure was put on Rosselló to resign, however, he refused to give in to the protestors demands.

Puerto Rico’s Chief of Staff and the head of Puerto Rico’s Federal Affairs Administration located in Washington D.C. both resigned after one day of protests. The same day, the Puerto Rican Department of Justice announced that warrants had been taken out, and were being used to collect the cell phones of several of the members of the Telegram chat. According to the Puerto Rico Bar Association, the chats were filled with seven potential crimes including: “an implied threat against the mayor of San Juan, Carlen Yulín Cruz, as well as possible instances of diversion of funds, conspiracy, disclosure of private information and intention to terminate employment based on political beliefs” (Mazzei and Robles, 2019). Perhaps just as horrific if not more so, is the fact that one of Rosselló’s aids joked about the overflow of bodies in the island’s morgues due to Hurricane Maria.

In addition to this Scandal, the Puerto Rican people are furious at the corruption that has been a part of the island’s administration for some time. Just days before the protests began, the FBI arrested former chief of Puert Rico’s Health Insurance Administration Ángela Ávila-Marrero, and former Education Secretary Julia Keleher over corruption regarding their handling of $15.5 million in contracts. The two are accused of sending the contracts to companies and businesses with which they had personal connections, disregarding the relevant experience and abilities of said companies (Aleem, 2019). After years of frustration over corruption in the small island territory, Puerto Ricans made history as following days of protests, closing streets and major highways, and even harbors in San Juan, Puerto Rico, the demand for Rosselló resignation was successful. His resignation followed a previous statement he made claiming that he would not step down despite the protests, and arguing that his words and actions though not polite were his right as a United States citizen.

The protests in Puerto Rico were historic, ending a ring of corruption in the island’s politics, as well as becoming the largest protest ever to occur on a U.S. territory. Despite the astounding accomplishments of the Puerto Rican people, there is still a great deal of dissatisfaction with the administration and fears of even more corruption. The Puerto Rican House speaker Carlos Mendez announced that an independent committee will be looking at the case of the governor and working to determine if there were illegal actions documented in the leaked messages (Aleem, 2019).

As he resigned, Rosselló nominated lawyer and former politician, Pedro Pierluisi, for governor. Rosselló had Pierluisi move in to the governor’s mansion immediately as he was moving out himself even though the Senate had not yet voted on Pierluisi’s confirmation. The Supreme Court ruled that Pierluisi’s appointment as governor was unconstitutional, and he was unfit to serve as governor (Fernández Campbell, 2019). Following the Supreme Court’s decision, Wanda Vázquez, the island’s Secretary of Justice, was sworn into office legally (Del Real and Robles, 2019).

Although developments in the case of Rosselló are still being made, the power that the Puerto Rican people had by taking the initiative of protesting for days with demands for the former governor’s resignation cannot be ignored by the American and global communities. The Ricky Renuncia Puerto Rican protests illustrate the true influence that the people have regarding their governments.