Protests Grow as Chileans Call for Redrafting of Pinochet-Era Constitution 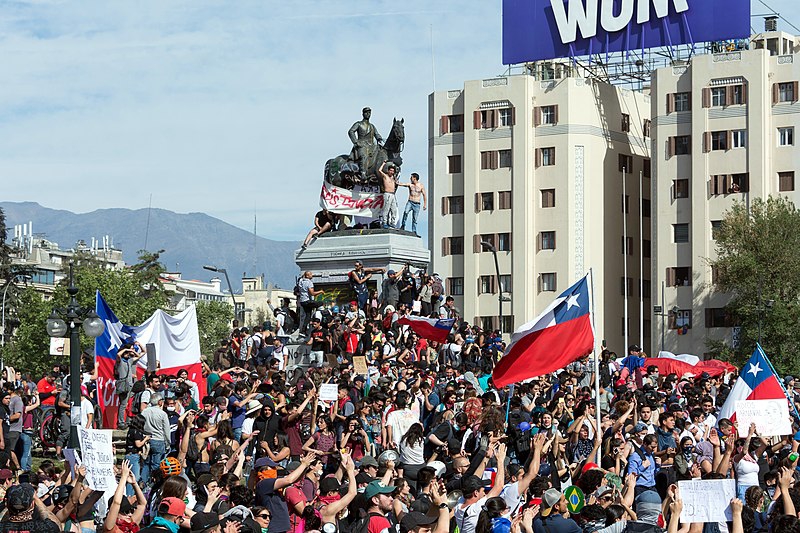 Chileans have had a troubling history with dictatorship, corruption, and violence. Beginning in 1974, a year after General Augusto Pinochet rose to power in a coup that was backed by the United States. thousands of Chilean people were murdered and ‘disappeared’ over the course of 17 years. Now, nearly 50 years later, Chile has the same constitution that was created during Pinochet’s rule by a small commission in his administration. Although the constitution has gone through many reforms in the years since Pinochet, Chileans are now demanding that a new constitution be drafted that better represents all Chileans interests and modern priorities (Cuffe, 2019). Protestors are taking to the streets, demanding a new constitution. These protests are becoming more and more extreme as anger against Pinochet’s legacy of inequality remains inherent in the principal document of the Chilean government.

In response to a four-cent subway fare increase that acted as the final straw of what many Chileans consider a series of unfair economic policy implementations, Chileans began protesting for the redrafting of the constitution. For over three weeks, these protests have begun to encompass not just financial inequality, but inequality that the nation has faced since Spanish colonization. Reports show that 80% of Chileans are in favor of the drafting of a new constitution, and support for Chile’s president, Sebastián Piñera, has fallen to 15% (Cuffe, 2019). Chileans of all backgrounds are taking part in the protests, with students, indigenous leaders, and now elderly civilians who lived through Pinochet’s oppressive rule leading many of the movements. Over a million people flooded the streets of Chile’s capital in on October 25 demanding justice for the inequality that Chileans faced under Pinochet, and still face to this day.

The economic inequality that the country is still experiencing is just one of the many factors that have lead activists to the point of protest. The New York Times reporter Amanda Taub summarizes the frustration that many civilians feel by explaining that “Chile’s middle class is struggling with high prices, low wages, and a privatized retirement system that leaves many older people in bitter poverty. And a series of corruption and tax-evasion scandals have eroded faith in the country’s political and corporate elite” (Taub, 2019). The politicians in Chile have become part of their own social class, a politician class which Cristóbal Rovira Kaltwasser, a political scientist at Diego Portales University in Santiago claims is “out of touch” (Taub, 2019). Protesters represent everyday Chilean people, and they are fighting for change not only for documents from the Pinochet era or the current economic inequality and corruption but for justice for the oppression and deaths due to Spanish colonization.

In Santiago’s urban center Temuco, protestors lassoed and pulled down a 16th-century statue of the conquistador Valdivia that overlooked the square. The protestors wore headbands and ponchos that are traditional of the indigenous Mapuche people— a group that has been severely oppressed from Spanish rule to the present day. South of Santiago in the city of Concepción, another statue of Valdivia was torn down by protestors who then impaled the statue’s head on a spike and placed it at the foot of a statue of the Mapuche chieftain Lautaro, who was Valdivia’s most significant opponent. “Most dramatically of all, a statue in Temuco of the Chilean founding father Diego Portales (1793-1837) was decapitated, and his head hung from the arm of a statue of the Mapuche warrior Caupolicán – now also holding the Mapuche flag, or Wenufoye” (Blair, 2019). While conservative Chileans refer to these acts as vandalism, the protestors consider it justice for the atrocities that Chileans have faced for hundreds of years. As protestor’s measures became increasingly extreme, so too did Piñera’s response.

Initially, Piñera removed the subway’s four-cent tax increase; however, the protests had become about much more than a simple public transit tax increase. When removing the tax did not quell the crowds, Piñera deployed the military to the streets for the first time since Pinochet’s regime held power (Taub, 2019). Piñera was able to do this by claiming that Chile “was at war with a powerful and relentless enemy,” and declared a state of emergency. The military enforced a nighttime curfew and worked to dispel protestors. The response of using military force only made matters worse for Chileans. Officials have reported that 23 people have died in the unrest, five of which were confirmed to have been killed by the military and police. According to the National Human Rights Institute, over 4,000 people have been detained and more than 1,600 people have been wounded as a result of the protests (Cuffe, 2019). Additionally, Piñera’s militarism only prompted more increasingly angry people to join the protests, infuriated that Piñera had taken measures similar to those used by Pinochet. In an interview with Al Jazeera, a survivor of political persecution under Pinochet’s regime, 73-year-old Mariana Eliana Ramirez, explained that “seeing the military in the streets over the last two weeks has evoked memories of the killings and disappearances during the dictatorship” and prompted her to join the protests (Cuffe, 2019). Eliana Ramirez is a part of what Piñera referred to as ‘a powerful and relentless enemy’ causing the need for a state of emergency, whereas the Chilean people believe that upheaval is necessary, and the constitution must be rewritten.

After realizing the failed attempt at using military and police forces to quiet protestors, Piñera appeared on television to ask for forgiveness as well as offer higher pensions, better health coverage, higher taxes for the rich, and pay cuts for politicians. He later went on to ask his cabinet to resign (Taub, 2019). Despite these promises, protests continue, and police, in turn, continue to respond with extreme measures, showering tear gas on a student demonstration at the University of Chile. The Chilean people have their demands, and will not stop until these demands are met by Piñera. Piñera claims he is fighting a war, a war which is lead by an older generation who is still fighting to change the laws of their many oppressive years of dictatorship, and by a younger generation who has no fear of speaking out against their government, being born after Pinochet’s regime, but who are just as eager for change.