Nicaragua’s University Students: A Force of Resistance within the Conflict 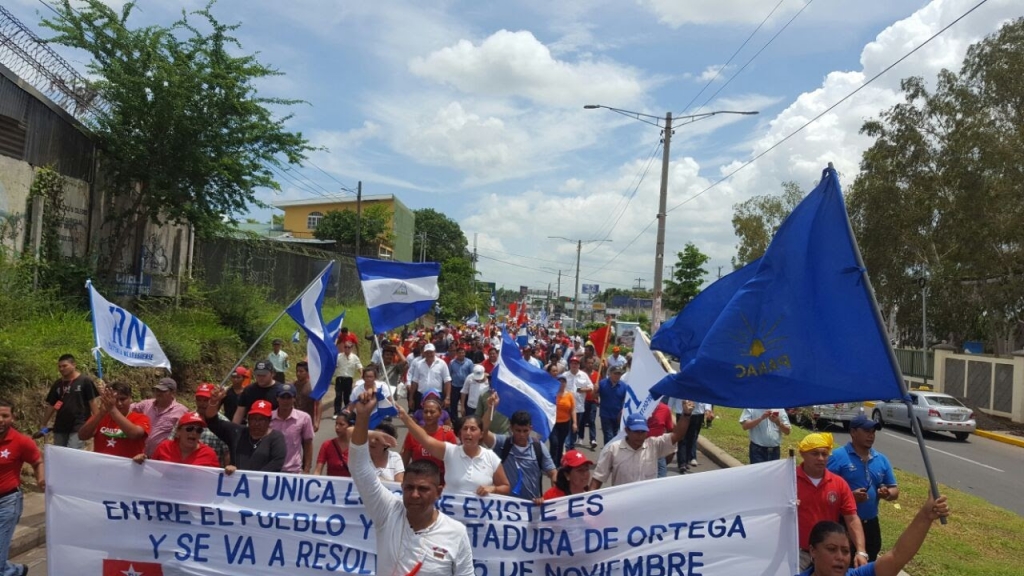 Nicaragua’s current President, Daniel Ortega, rose to power as a revolutionary leader in the Frente Sandinista de Liberacion Nacional (otherwise known as FSLN or Sandistas) that overthrew the dictatorship by removing President Anastasio Somoza Debayle in 1979 (Perez). In 2007, Ortega was elected as president and because of his sound economic policies and social spending, was re-elected in 2011 and 2016 (Perez). Although elected through a democratic process, Ortega has grown increasingly more controlling over all branches of government including the Supreme Court, National Assembly, and the Supreme Electoral Council (Perez). Additionally, because the national legislature has a Sandista majority, it is under Ortega’s control. Other concerns of undermining fair and free democratic governance stem from Ortega’s control over the media, which inhibits normal competition from other political parties (Reich).

The Role of University Students

Once a Central American country that was developing rapidly, Nicaragua is now facing a terrifying reality as anti-government protestors and pro-government forces violently clash in the capital city, Managua, and other places throughout the country. The chaos started three months ago on April 12th, when university students protested the government's poor response to wildfires in Indio Maiz Biological Reserve (“2018 Nicaraguan”). Calling themselves autoconvocados, or the self-organized, the wave of student-led environmental demonstrations protested government negligence. Days later, the Nicaraguan government announced changes to the country’s social security system that would raise taxes and lower benefits for citizens in an effort to decrease a growing fiscal deficit (Robles). On April 18th, larger student-led protests were kindled on college campuses against these social security reforms and students took the streets with pensioners against the reform (“2018 Nicaraguan”). Some analysts of the ongoing crisis argue that the Ortega government had not been accustomed to widespread pushback, and thus prompted government security forces and armed militants to violently clash with the peaceful protestors (Perez). Although the government quickly retracted the social security changes, it was too late. The violent government backlash against its own citizens prompted national outrage. The origins of the relatively small autoconvocados movement consisting of angry university students rapidly gained momentum to include various oppositional movements. Most notably, the Alianza Cívica por la Justicia y la Democracia (Civil Alliance for Justice and Democracy) which consists of the private sector, students, and citizens (Hanson and Gomez). The opposition groups seem bonded not by ideology or political motivations, but by a general consensus of moral outrage to governmental negligence, corruption, and authoritarian-style rule. In the past months, hundreds of thousands of anti-government demonstrators have taken to the streets to denounce the Ortega government (Reich). The violence has skyrocketed as many nonviolent marches and demonstrations are continuously met with extreme repression. According to news outlets, nearly 300 people have died since the beginning of the conflict, the majority of them protestors and bystanders (Wintour).

The harsh reality of the situation in Nicaragua is painfully evident at the Autonomous University of Nicaragua (UNAN) in Managua, where nearly 500 students have barricaded themselves inside since May 7th. The occupation of UNAN is one of the many student-led resistance efforts throughout the country. The students are angry at the brutal crackdown on civilians and demand the removal of Ortega as a corrupt and authoritarian president. They prefer to barricade themselves in at UNAN and form a resistance group together, as they feel drastically safer from pro-government forces inside the university walls than at home or in the streets (Felix). Even so, the situation in and around UNAN is extremely dangerous as pro-government forces unleash attacks on the building and the students on a daily basis. While the resistance is fighting against the repressive state security forces, they also have to protect themselves from pro-government “parapolice” groups. These types of violent groups are composed mostly of gang members, members of the Sandinista Youth, as well as policemen not dressed in their uniform. They are extremely destructive, as they have been blamed for nearly 200 deaths during the conflict (Perez). On June 7th, an UNAN student and protestor named Chester Chaverria, 19, was shot and killed by pro-government youth who tried to raid an UNAN building (Felix).

The central role of university students in the mobilization efforts against the Ortega government are another example of how the young people can change the political culture, history, and democratic health of a country. In June, three students leading the anti-government coalition travelled to Washington, D.C. to denounce the repressive actions of the Ortega government and speak about the ongoing crisis to the Organization of the American States (OAS). Although a huge step forward in mediating the crisis, the trip resulted in flaring tensions within the coalition when the students posted pictures with Senator Marco Rubio (R-FL) and other conservative U.S. leaders (Hanson and Gomez). We have seen the university students play major roles in events like the Yo Soy 132 movement that originated from public and private university students in Mexico that assembled against government repression and media manipulation in the 2012 Mexican general election. Similarly, in Argentina, the Ni Una Menos feminist movement has been carried on the backs of passionate university students who assemble in Buenos Aires and across Latin America. In the United States, universities across the country have seen massive turnouts to protest visits by Donald Trump either at or around their universities. No matter the country, this demographic is educated, well-connected, and contain the energy needed to make dramatic change in their country. The future of Nicaragua is still uncertain--- but young people have proved that they are a force to be reckoned with.