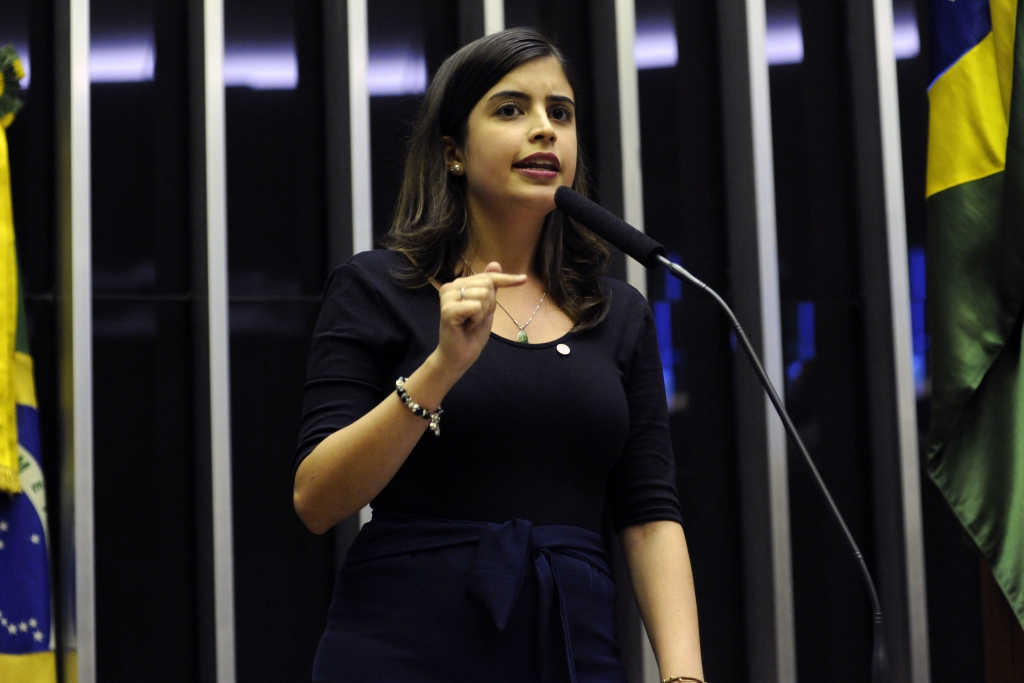 For most people, the image of a typical politician is a white man, probably wealthy and a bit older.  Even as significant progress has been made on gender and racial equality, the idea of what a politician looks like has not changed much.  Tabata Amaral, a Deputy in the Brazilian Chamber of Representatives, has made it one of her goals to change this.  At just 26 years old, Amaral has already made a name for herself both nationally and internationally, often drawing comparisons to U.S. Representative Alexandria Ocasio-Cortez.  While parallels undoubtedly exist between the two, Amaral is more than just the Brazilian version of an American politician and has quickly become a force to be reckoned with in the Brazilian political world.

Amaral comes from a humble background.  She was raised in a poor neighborhood on the edge of São Paulo, Vila Misionária (Regmi, 2019).  The idea of attending college or holding public office was unheard of in her community growing up, and most people did not have much control over their own destinies (Regmi, 2019).  This may have been her fate, too, had it not been for one teacher who encouraged her to participate in a mathematics competition (Regmi, 2019).  Through the competition, she earned a scholarship to study at a private school and was the first person in her family to graduate high school (Regmi, 2019).  She attended Harvard University, initially studying astrophysics, but later changing her major to political science after reflecting on her current opportunities compared to her past (Regmi, 2019).

Because it opened so many doors for her, education has been the central issue of her political career.  Amaral helped to launch the movement Mapa Educação that aims to prioritize education on the national level and to put students and young people front and center in the fight (Nossa História).  The central principle underpinning Mapa Educação is that education is the key to leveling out inequality, drawing on Amaral’s personal experience (Nossa História).  Amaral believes that politics are the reason for the shortcomings in the Brazilian education system and aims to change the way that the politics around this issue are done (Tornaghi, 2019).  The movement also strives to actively include young people, who are not normally involved as heavily engaged in politics (Nossa História).  As of 2018, the movement boasts 21 civic actions taken around the country led by young regional coordinators and claims that they impacted over ten thousand people (Nossa História).  Though Amaral has yet to pass any major education policy on a federal level, this movement has boosted awareness and engagement surrounding this cause.

After education, political engagement and increasing the diversity of voices in politics have been the most important issues in Amaral’s career.  She has launched two different movements that aim to accomplish this goal.  The first is Movimento Acredito.  Acredito, which means “I believe” in Portuguese, has a laundry list of goals that they have for Brazil’s political future, among them “putting people at the center of decisions,” fighting privilege in politics, making campaigns more affordable to run, and creating a Congress that is “connected with society” (Quem Somos).  The second movement, Vamos Juntas, or “let’s go together” in Portuguese specifically referring to women, is aimed at getting women involved in politics through mentorship, networking, and personal development (Vamos Juntas).  These movements highlight Amaral’s faith in the power of democracy and her distaste for the traditional monopolies on political power.

As a deputy, Amaral first put herself in the spotlight in 2019 after her grilling of the Minister of Education at the time, Ricardo Vélez Rodríguez, went viral.  She claimed that Vélez was not doing his job and had not produced more than a wish list with no action plan in his three months of being on the job (Tábata Amaral x Vélez Rodríguez, 2019).  She then further suggested that if he did not change his attitude and get to work then he should not hold the position (Tábata Amaral x Vélez Rodríguez, 2019).  Bolsonaro removed Vélez from the position shortly thereafter, and Amaral’s questioning of him is largely credited with putting pressure on the president to do so (Tornaghi, 2019).

Recently, Amaral has gained attention for being one of the most vocal critics of Brazilian President Jair Bolsonaro’s response to the COVID-19 pandemic.  She argues that while the virus is a reality for all countries, the extent of Brazil’s plight was unnecessary and caused by Bolsonaro’s inadequate leadership (Vietor and Rhodes, 2020).  Specifically, she cites a lack of transparency and even censorship by the government to hide how bad the situation is and an excessive focus on the economy as the main components of Bolsonaro’s failed response (Vietor and Rhodes, 2020).  Even as the pandemic has become a norm for many around the world, she has continued to speak out, using it as an opportunity to highlight the broader issues with the Bolsonaro administration and the importance of being an informed voter (Vietor and Rhodes, 2020).  Though she is undoubtedly making a splash, she has not received the same sort of mockery and attention from Bolsonaro that Ocasio-Cortez has received from President Donald Trump in the United States.

Beyond the work that she is doing to make a difference in real-time, Amaral represents something greater.  The image of a typical politician as a wealthy white man will never change unless people who differ from that mold enter public life.  As a young woman who fully embraces the fact that she is a young woman, Amaral serves as a powerful example of the difference that seeing people who unapologetically look like you in positions of power can make.  Amaral herself is acutely aware of how important this is.  When she was younger, she could not see herself in a position of power solely because she had never seen someone like her hold one (Regmi, 2019).  She said that when this is the case, “you simply accept that these positions are not for you” (Regmi, 2019).  As such, both through movements like Vamos Juntas and Acredito and through simply holding a position in the Chamber of Representatives, Amaral aims to change the face of Brazilian politics to look more like the average Brazilian.

Even as Amaral has already made a difference and continues to have big dreams, her position has not been without its challenges.  The fact remains that even after the most recent elections in 2018, women still only represent fewer than 12% of seats in Congress and 7% of the presidential cabinet positions, making their female representation 152nd in the world, behind both Iraq and Afghanistan (Brazil Institute, 2018).  Policymakers have attempted to address this gap by creating a campaigning quota that requires 30% of all candidates running for office to be women (Brazil Institute, 2018).  However, only races that are determined through proportional representation (as opposed to a winner-takes-all election) are eligible for this quota, thereby excluding positions such as the Senate and the presidency, and even with this requirement, the numbers continue to be dismal (Sader, 2020).  Justice on the Superior Electoral Court Luciana Lóssio even said of Brazilian politics, “The political arena is a sexist, patriarchal environment that closes its doors to women” (Brazil Institute, 2018).  This state of affairs is the reality within which Amaral must function, and her vision for a future free of this has not made her immune to it.  When she first announced her candidacy, many people did not take her seriously or even think that she was eligible to run (Reghmi, 2019).  Even as a sitting representative who received the sixth most votes in the large precinct of São Paulo, some of her colleagues have called her “deputadinha,” using the diminutive form of the word for deputy in an attempt to belittle her (Reghmi, 2019).  This kind of treatment shows just how much progress still has to be made for Amaral’s hope for the future to be realized.

Nevertheless, Amaral shows no sign of quieting down anytime soon.  She is intelligent, persistent, and strong in her convictions, unafraid of anyone who might be threatened by her being any of those things.  She believes in a true democracy, composed of the people, by the people, and for the people, and at only 26, she has already laid an impressive groundwork to accomplish this goal.  Only time will tell when or if Amaral’s hopes are ever achieved, but even in her short career, she has made clear that she will go down in history as someone who pushed the envelope on representation and accountability.

Quem Somos [Who We Are]. (n.d.). Acredito [I Believe]. https://movimentoacredito.org/quem-somos/