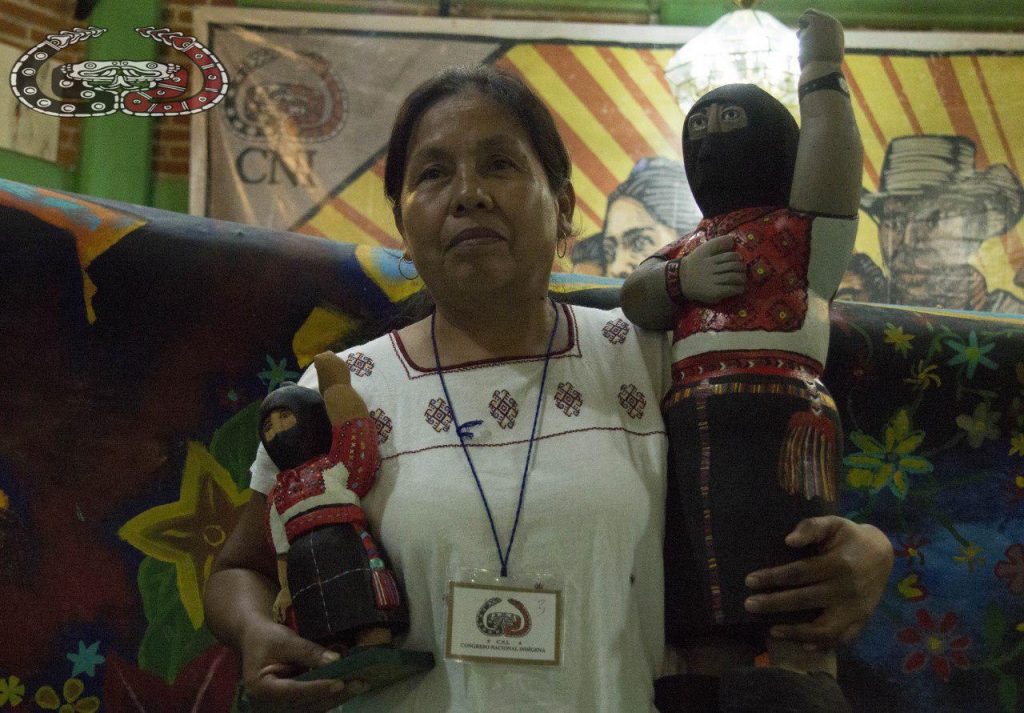 Twenty-three years ago, Mexico’s Zapatista National Liberation Army (EZLN) successfully executed its famous uprising under its leader, Subcomandante Marcos, which many thought would be the first sentence on a new page in Mexican history.  The revolution in Chiapas, which was intentionally planned to align with the introduction of the North American Free Trade Agreement (NAFTA), seemed as if it would achieve its goal of realizing rights for indigenous people (Young 2017).  But after a series of disappointing losses in the legislative arena combined with inaction from Mexican politicians, the EZLN failed to achieve the majority of its demands.  Over the past two decades, onlookers have watched the Zapatistas fall from their place in the headlines to near-extinction, or so it seems.

With the EZLN’s decision to back María de Jesús Patricio, or “Marichuy,” along with the Indigenous National Congress, it appears as if the Zapatistas may be re-entering the political ring after some rebranding.  The group made an announcement this year that it was renouncing armed revolution, as Mexico, already so plagued by violence and killings, simply cannot handle more of it.  Since the drug war began a decade ago, over 100,000 have been killed and 30,000 and counting have disappeared, with May and June of this year setting 20-year records for homicides across the country (Villegas 2017).

This push towards finding peaceful solutions started becoming clear with the Zapatistas’ 2013 creation of La Escuelita – “The Little School” – which is a program consisting of classes taught in the group’s autonomous communities for academics, activists, and sympathizers from around the world, including from other parts of Mexico (Tucker 2014).  As the EZLN began to move away from the armed insurgency in which it has its roots, education and the inclusion of younger members in its operations have become its latest tools of choice.

The move towards political involvement, therefore, seems fairly logical.  However, a number of critics alluded to the hypocrisy that the Zapatista’s backing of Patricio creates.  The EZLN has never supported a political party in its history, and stated, “the electoral time is not for the Zapatistas, especially considering the antidemocratic context, one in which the political forums are not working for the bottom, in which the words plebiscite or referendum are just lyrics hard to spell,” just before the 2000 presidential election (Niembro 2017).

According to the Zapatistas, though, their goal proves that their position on elections has not changed; they claim that their hope is to simply use the 2018 election as a platform for issues pertaining to indigenous communities (which would also aid in organizing their incredibly varied and scattered subjects), and that they have no intention of winning.  Carlos González, who is a spokesperson for the National Indigenous Congress and the EZLN, said, “we couldn’t care less about the presidency; all we want to do is crash the election party and ruin it” (Villegas 2017).  In another interview, González noted that it was necessary to use the space provided by the election because the Zapatistas and the indigenous groups it represents do not have one of their own (Lafuente 2017).

If their hope is to bring indigenous peoples’ struggles to the forefront of this year’s election, the Zapatistas certainly selected a worthy candidate.  Marichuy is a traditional Nahua healer from Jalisco, and she has repeatedly compared the state to organized crime and denounced the capitalist agenda of Peña Nieto’s government (Tucker 2017).  Local media sources reported that while she was enrolling herself in the National Electoral Institute, she refused any potential government financing towards her campaign (Forbes Staff 2017).

Although she is not a Zapatista herself, Patricio has been quoted preaching the same ideology of the group, saying that her candidacy is to inspire not only indigenous people but all Mexicans, “to join forces to be able to destroy this system that is generally finishing us all off” (Young 2017).  She is referring to the land disputes which have left the majority of indigenous peoples to live in the poorest, least developed parts of Mexico.  An estimated 50 percent of indigenous people in the country remain without electricity and running water, and escalated malnutrition has driven the child mortality rate to 20 percent in certain communities.  Conditions are even more bleak for indigenous women, who are less likely to speak Spanish and have about half of the education that their male counterparts have (Minority Rights Group International 2017).  Now, these indigenous communities are facing even more pressure from cartels, who have begun to invade the little land they have to grow opium and marijuana and to illegally log and mine.  This year, at least six indigenous activists were murdered (Tucker 2017).

Marichuy, especially given her support from the Zapatistas and the Indigenous National Congress, may be the key to getting the indigenous population, which has long been underrepresented in the Mexican government, out to the polls.  If successful, data shows that Patricio could strongly impact 28 districts in which indigenous Mexicans are the majority (about one percent of the total voting population) (Niembro 2017).

The candidate, who often speaks of gender equality, also has a strong potential to prompt women who want more representation in a country which is growing increasingly dangerous for females.  Data revealed that in response to Calderon’s drug war, the number of women murdered in the country between 2007 and 2012 rose 112 percent, with a 155 percent increase just between 2011 and 2012 (Rama 2014).  As of this year, it was reported that on average one female is killed every eight hours in Mexico, and every four minutes a woman or girl is raped.  Forty percent of women have reported spousal violence, with no response from law enforcement.  The state of Chihuahua is particularly dangerous, where the rate of femicide is 15 times higher than the world rate, with 34.73 deaths per 100,000 women (Chughtai & El Hadad 2017).

One other section of Mexican society has taken a particular liking to Patricio’s platform, as well.  A number of intellectual groups, especially university students, are passionate in taking up Marichuy’s fight against the “enemy,” capitalism, echoing Zapatista sentiments of the past (Beauregard 2017).

Although most analysts agree that it is unlikely that Patricio will gather enough support to be a real threat to the presidential seat, she has the potential to impact the 40 percent of voters who abstain from participating in elections, usually claiming to be against the current system (Tucker 2017).  And even if her run is technically unsuccessful, Marichuy may still be the hero who allies Mexico’s 25 million indigenous for the next big Zapatista crusade.