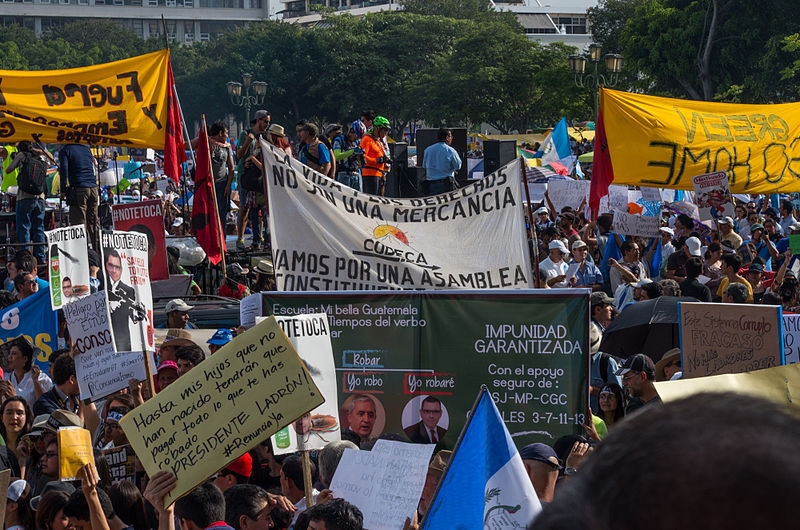 Last week it was reported that the former vice president of Guatemala, Roxana Baldetti, had been formally sentenced to 15 years in prison following her involvement in what is being called the “Magic Water” scandal.  Baldetti was found guilty of participating in and directing a criminal network in the multimillion-dollar scheme, which redirected state funds intended to clean the contaminated Lake Amatitlan (Al Jazeera 2018).

Baldetti coordinated the distribution of funds to a number of shell companies and individuals while filling Lake Amatitlan with a useless mixture of water, salt and chlorine instead of the chemical prescribed to reverse the ecological damage, giving rise to the name of the crime.

Counted amongst the nine individuals charged in the “Magic Water” scandal were Baldetti’s brother, Mario Baldetti, a number of Guatemalan officials, and Uri Roitman, the businessman in charge of the Israeli company that accepted the $18 million USD contract to clean the lake (BBC News 2018).

This was not the first time Baldetti has come under fire for the misuse of her political power.  In 2015, she and former President Otto Perez sparked a nationwide crisis when they were jailed in response to accusations that the two were involved with a customs fraud scandal nicknamed La Línea (The Line).  Baldetti also face separate corruption charges and has an extradition request from the United States for drug trafficking charges (Al Jazeera 2018).

Baldetti and Perez, of course, are not the only officials to have marred the legitimacy of the Guatemalan government with corruption schemes.  Among those arrested in the Línea scandal were Alvaro Omar Franco Chacon, the then-head of Guatemala’s Superintendency of Tax Administration (SAT) and his predecessor, Carlos Enrique Muñoz Roldan.  The two helped to funnel off 30 percent of standard import taxes, stripping the government of more than half of the tax revenue expected from imports. Perez was also found to have ties to possible fraud networks long before La Línea as well, potentially implicating dozens of people from his time as the president of the Estado Mayor Presidencial (EMP), the intelligence wing of the presidency (Gagne 2015).

A report made by the Washington Office on Latin America (WOLA) about illegal armed groups in Guatemala revealed that such corruption is not a recent phenomenon in the country, either.  Notably, as a response to the country’s civil conflict, a number of former military and intelligence officials, suddenly without work, became founding members of a clandestine group called “El Sindicato.”  Members of the highly cohesive Sindicato supposedly integrated into the Moreno network, a group of military, police and government officials which cemented the apparent norm of high-level corruption in Guatemala from the 1970s until the mid-1990s (Gagne 2015).

It would be an understatement to say that the Guatemalan people are ready for change.

The election of former comedian, Jimmy Morales, as president in January 2016 demonstrated the desire for change.  His election slogan, ‘Neither Corrupt, nor a Thief,’ propelled him to approval ratings exceeding 70 percent after he took office, and it seemed the country would finally have a representative for justice (Duff 2017).

After a fraud trial involving Morales’s son and brother began in 2017, though, suspicions surrounding Morales began to mount, coming to a head when some of the country’s most successful businessmen publicly stated their role in secretly financing the president’s 2015 campaign (Lakhani 2018).

In response to the allegations, Morales has made moves to dismantle the Commission Against Impunity in Guatemala (Cicig), which was created by the United Nations in 2007 to counter criminal networks like El Sindicato and the Moreno network that have increasing power in the country.  He has also dismissed pro-Cicig officials, which include the country’s chief of police, security minister and chief tax inspector. Iván Velásquez, the chief of Cicig, has been unable to re-enter the country due to unspecified “reasons of order and public security” (Lakhani 2018).

Although Cicig has successfully exposed 60 criminal networks in the country and bring charges against 680 individuals involved with organized crime (including four former presidents), Morales claimed - without evidence -  that the body encouraged corruption and used ideological bias when choosing which criminal cases to pursue.

A senior UN diplomat stressed the importance of Cicig, saying that the resistance to the organization is due to the fact that, “There are no untouchables. The hostility against Cicig is a predictable reaction to the fact it’s getting close to the point of no return” (Lakhani 2018).

However, Morales has not been swayed by the opinions of his international counterparts or his people, who have been taking to the streets and shutting down highways during protests to reinstate the commission.  It is suggested that the president has not felt pressured to reconsider his decision in part because of the absence of backlash from the United States, which did not issue a statement regarding the dismantling of Cicig.  Republican senator Marco Rubio actually decided to suspend six million USD of funding for the commission following commentaries from right wing lobbyists that suggested Cicig was under Russian influence (Lakhani 2018).

Others like Fernando Carrera, a former Guatemalan foreign minister, are not as worried about Morales’s order, saying that beyond the anti-corruption panel, “Congress, the media, civil society, political groups are against him,” assuring that “the Constitutional Court will put limits on his authoritarian position” (Malkin 2017).

There might be reason to believe otherwise, though, as Morales continues to skirt retribution.  This week, the business-backed Congress voted that the president would not lose his right to a preliminary hearing regarding his illicit electoral financing (Álvarez 2018).  If Morales’s verdict on Cicig holds, it may indicate the true level of corruption present within Guatemala’s government. As of this year, more than one in five lawmakers in the country is under criminal investigation (Lakhani 2018).