Maduro withholding passports to keep control at home and abroad 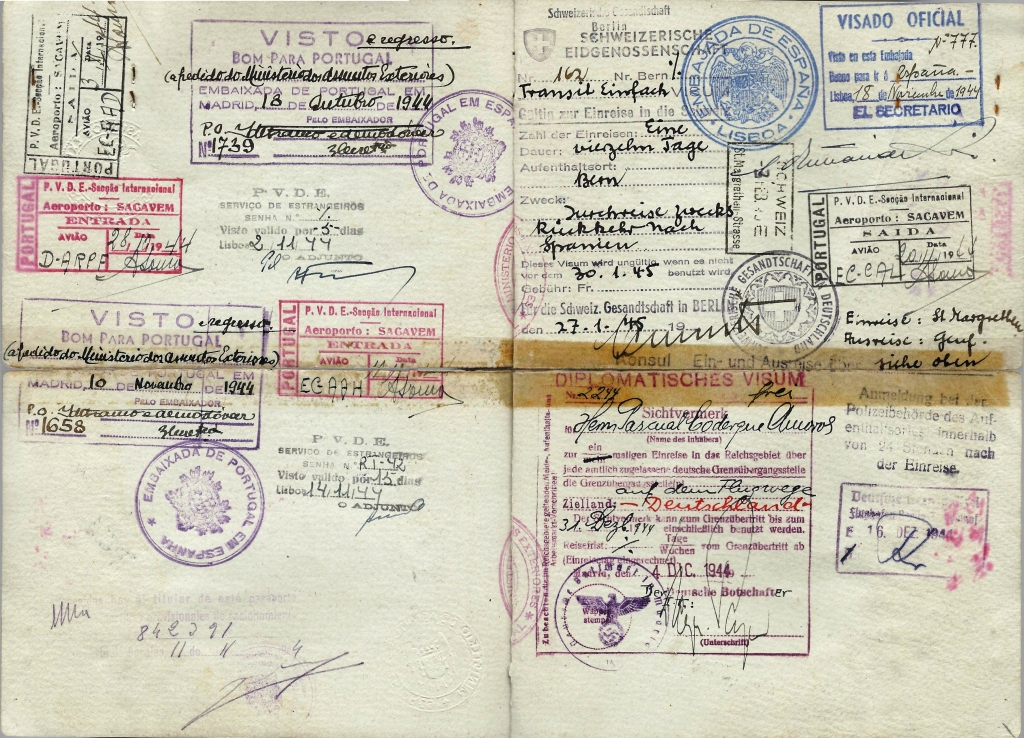 Since the start of the Bolivarian Revolution in Venezuela, the country has been seeing mass migration that has astounded many.  A late-2017 survey compiled by the group Consultores 21 discovered that more than four million Venezuelans have left the country since the start of the revolution in 1999, with another 51 percent of young adults still living there stating that they had hopes of also emigrating (La Patilla 2018).

Such emigration has been placing stress on neighboring countries of the oil colossal like Peru, Ecuador and Colombia.  Despite an initial open-door policy towards all Venezuelans fleeing the deteriorating situation in their country, Ecuador, which has taken in over 423,000 Venezuelans this year alone, and Peru, which has also absorbed about 400,000 emigrants, recently announced that they would only be permitting Venezuelans with valid passports entrance at the border (McMah 2018).

Ecuador’s new passport ruling followed a state of emergency that was declared in response to the influx of migrants, but was quickly lifted following an outcry from migrants stranded at the border and pressure from Colombia’s immigration director, Christian Krüger, who expressed his worry about the consequences of such a law, stating that, “asking for a passport isn’t going to stop migration, because they’re leaving their country not out of choice but out of necessity” (AFP 2018).

Peru has not bent regarding its new border policy, holding that they are still welcoming Venezuelans.  Interior Minister Mauro Medina vocalized that the criticism from Colombia was unwarranted, as only about 20 percent of Venezuelan immigrants at the border do not have a passport (AFP 2018).  The country also declared a state of emergency following anxieties that Venezuelans were spreading diseases like measles and malaria (Taj 2018).

Such concern is warranted, as many of the migrants have crossed the border to seek basic medication and health care.  The World Health Organization (WHO) reported that two out of five hospitals in Venezuela are without drinkable water, and 75 percent of all hospitals are missing the basic drugs listed on WHO’s list of essential medicines.  In the past four years, at least one-fifth of medical personnel have also fled, leaving hospitals and clinics critically understaffed. Owing to the rampant malnourishment across the country, there have been several outbreaks of tuberculosis, diphtheria and Chagas disease, but those inflicted have been turned away from hospitals without supplies.  Likewise, vaccines have disappeared leaving at least one million children vulnerable to measles, and it is estimated that over half a million Venezuelans have contracted malaria (O’Neil 2018).

Politicians in border countries also face social tension amongst their own citizens.  In Ecuador, hundreds of people in Tulcan, a border town, marched to demonstrate their displeasure of the number of immigrants entering the area, with many arguing that refugees are stealing jobs (Van Sant 2018).

In Peru, a conservative candidate with a penchant for anti-immigration rhetoric, Ricardo Belmont, has been gaining ground in this year’s elections for the mayor of Lima.  In a statement on a local TV channel last week, he suggested that Venezuelans should have to submit to a medical exam and sign a certificate of good conduct before being considered for entrance.  The country’s Prime Minister, Cesar Villanueva has strongly opposed Belmont’s campaign, especially given that, if elected, he would govern the city where the largest population of Venezuelan immigrants in Peru live (Reuters Staff 2018).

Although relief spread across those trying to enter Ecuador after the initial passport ruling was revoked, those still stranded outside of Peru are scrambling to find other options.  Thousands of people who were already enroute to Peru have been left without money far from friendly territory, having spent all of their savings on the bus trip to get there. The following infographic from the Jesuit Refugee Service in Colombia shows estimates of the costs in United States dollars (USD) of the most frequented routes Venezuelan migrants have been taking, and the amount of time spent journeying between the most popular destinations and border towns. 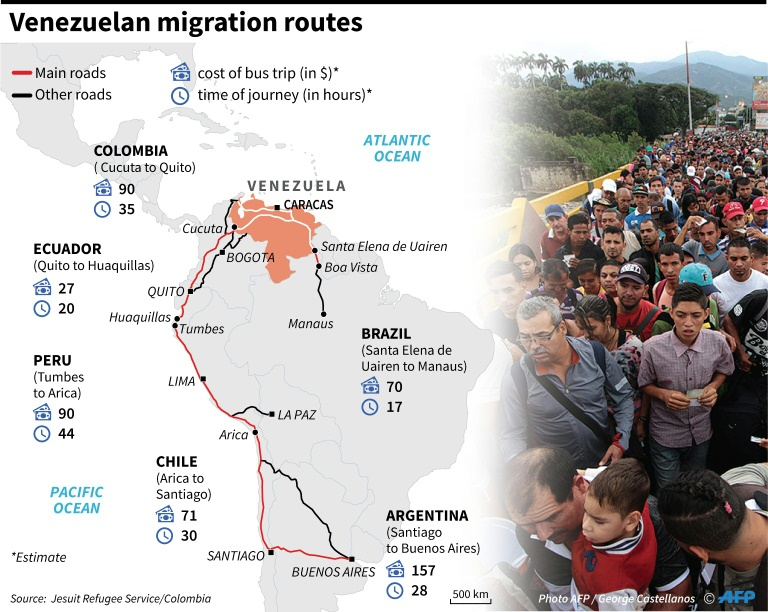 Of course, many people question why Venezuelans hoping to leave the country do not simply purchase a passport.  Buying a passport in Venezuela, though, has been a process reserved for the upper class for the past few years. The country has claimed that a shortage of paper and ink has indefinitely suspended the production of passports.  A report from Al Jazeera found, though, that passports are still being issued, but the document can cost upwards of $2700 USD in fees and bribes, leaving the majority of Venezuelans who are living off of an average monthly wage of $1.40 a day without hopes of securing their papers. What is more, it is reported that daily ATM withdrawals are limited to 10 bolivars (about 15 cents in USD) each day (McMah 2018).

In response to the passport shortages, in 2017 Venezuelan President Nicolas Maduro initiated a new program allowing citizens with expired passports to receive a stamp which would extend the validity of their passport for two years, saying that those outside of the country would be able to go to their respective consulate buildings to validate their extension (Garcia 2017).  However, many Venezuelans lack enough blank pages for the extensions or have unqualified passports that were issued before 2016, and many have expressed concern about the validity of such an extension in other countries.

Even Venezuelans who have managed to escape across the border, with or without a passport, are now finding harsher conditions and xenophobia.  After a Venezuelan criminal attacked a Brazilian merchant in the town of Pacaraima, Brazil, nearly 1,200 Venezuelan migrants had to flee the city after locals burned down their camps and chased them back across the border (Van Sant 2018).  The United Nations High Commissioner for Refugees conveyed his worry that such mob violence in combination with the new passport rules will force Venezuelan people to “...take dangerous routes to other countries or leave them vulnerable to human traffickers and other dangerous groups” (McMah 2018).

Maduro has responded to such stories of struggle of his people with the suggestion, which he made in a public address, that the millions of Venezuelan citizens who have fled the country leave their jobs cleaning toilets in other countries and return home (Vinogradoff 2018).  In addition to his statement, Maduro made a very public display of the repatriation of 89 citizens from Peru, after they reportedly admitted their inability to find better work or safe conditions in the country. However, many have shown skepticism that the event occurred, providing evidence from the repatriated citizens’ social media accounts that some of them had never left Venezuela in the first place.

Venezuelans who are already abroad with expired passports that do not qualify for the two-year extension are also feeling the hypocrisy of Maduro’s plea, as they are unable to get the proper documentation to travel home.  Maduro has also rendered any secondary passports of Venezuelan citizens with dual citizenship useless since 2016 in the Official Ruling 40.909 which prohibits the use of passports accrediting any other nationality by Venezuelans to enter the country (a law meant to curb the participation of Venezuelan emigrants in elections) (El Nacional 2016).