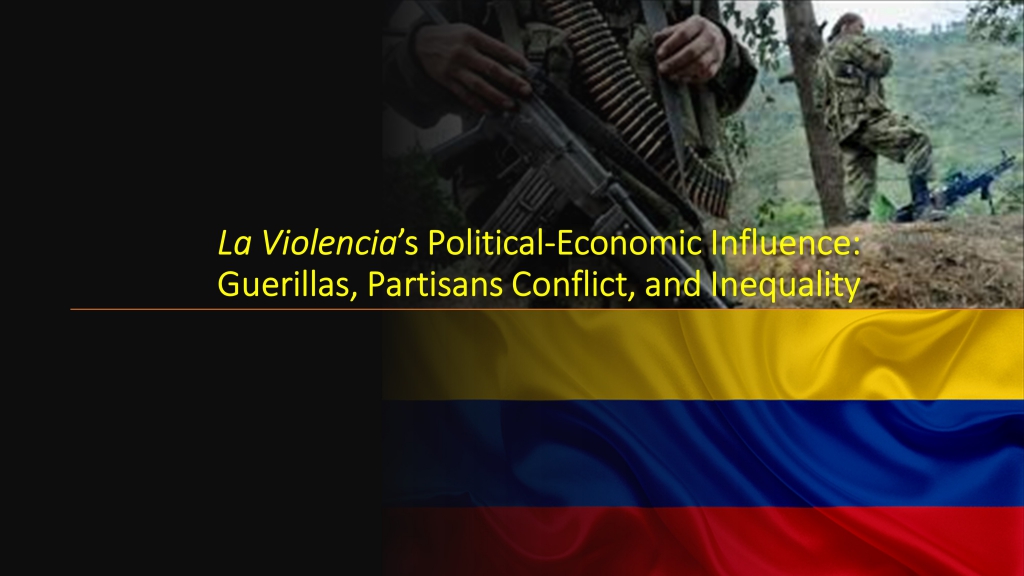 “The current policy of Colombia was born on April 9, 1948,” is how researcher Gustavo Ferregán summed up the first day of La Violencia (Miranda, 2018). To understand how Colombia reached this point, it is important to begin in 1930. Following the 1929 Great Depression, the price of Colombia’s chief export product, coffee, fell drastically. Nevertheless, the production volume of coffee increased (Bulmer-Thomas, 2014, p. 211). This inverse relationship meant that rural workers continued to produce a depreciating product. Their unions united firmly against this, opposing the Conservative Party’s movement against labor unions. As a result, the 1930 election saw Enrique Olaya Herrera of the Liberal Party elected, ending a Conservative presidency of over 30 years. Countless clashes between peasants, landowners, and industry owners marked the 16-year reign of the Liberal Party. The Liberal Party leaned towards modernization and industrialization, gaining the support of Colombia’s urban population. Clashes and conflicts all came to a head in the crucial 1946 Presidential election. Liberals were split between two candidates: Gabriel Turbay, the U.S Ambassador, and a certain Jorge Gaitan, a former Minister of Labor and Minister of Education. Unfortunately, this party divide only benefited the Conservatives; they comfortably won the Presidency. However, the celebration was short-lived. On April 9, 1948, Liberal Party leader Jorge Gaitán was assassinated in broad daylight on the streets of Bogotá. This was the beginning of La Violencia, a civil war lasting until 1958 (Parsons et al., 2020).

Though historians are still debating what exactly caused La Violencia to become so violent, one theory posits it as a culmination of social tension from more than two centuries. This unrest was a result of Liberals and Conservatives attempting to turn the politically significant rural populations into loyal party members. To do this, they emphasized the importance of party politics over other types of social memberships, like the Catholic Church. Still, the ruling party always remained aware of how unstable power can be. When the Conservatives won the Presidency in 1946, they could not be complacent, especially with a split Liberal Party. Considering the era of “modern means of material,” brewing social unrest, and loyal party fanbases in rural areas, violence heated until finally, it erupted beyond anyone’s control (Bailey, 1967, pp. 571-573). When Conservative President Mariano Ospina Perez left office in 1950, Laureano Eleuterio Gomez, a former Minister, replaced him in an election with no opposition. Unfortunately, Gomez only worsened the violence. An estimated 50,253 died in his first year alone, exceeding any other year by far (World Peace Foundation, 2016). He abused presidential power by stripping civil liberties through martial law, censoring the press, and controlling the courts. Gomez also struck down any labor laws passed by Liberals with executive orders. Growing tired of his dictatorship, the military, led by General Rojas Pinilla, deposed Gomez in 1953.

Gomez’s departure marked the beginning of La Violencia’s “Economic Stage.” The line between Conservative and Liberal became more blurred, transforming into a fight for economic equality. This was different from the senseless brutality of murders, torture, hangings, and property lootings that defined the 1948-1953 years. The government lost control in rural areas to newly organized gangs. These gangs would arrive in farming or local communities, violently threatening laborers regardless of party affiliation. Often, they would take their products (like coffee) and resell it for even higher prices to richer bidders.

In some cases, bandits would forcibly remove peasants from their properties (Bailey, 1967, p. 568). This part of La Violencia meant that the government lost legitimacy as it was unable to wield the necessary force. Many younger people joined guerrilla groups with the hope of fighting against the government or opposition guerrillas. Fortunately, politicians recognized the war was unsustainable. Finally, to repress the parties’ tensions caused by Gomez and Rojas, the Liberal and Conservative parties came to an agreement. Ironically, Gomez himself came back from exile to support these talks. Following Rojas’s exile in 1957, both parties entered the National Front period, in which the Presidency was to rotate between a Liberal and a Conservative every four years for 16 years (Parsons et al., 2020). Though the National Front was an amicable solution to years of fighting, much of Colombia’s political-economic history can be traced back to La Violencia.

The National Front was, needless to say, an interesting period for Colombian democracy. Those who think this period limited third-party political involvement would be partially right: Liberals and Conservatives each reserved 50% each of the seats in Congress. Third-party members often simply associated themselves with the party closest to their ideologies, as was the case with the Communist Party candidates joining the Liberals. Second, power-sharing was only at the Congress level. There was still fierce competition for the town, district, and department elections. As for policies, Liberals pushed for rapid urbanization and development at the cost of rural regions. Conservative President Pastrana was quick to pass land reforms, only benefitting the elites. Coupled with rapid yet ineffective attempts at urbanization, these policies left rural areas undeveloped. Liberals could not implement much-needed reforms to lower the country’s inequality—.52 on the Gini Index in 1970 (Bulmer-Thomas, 2014, p. 334). While the National Front was a period of little direct Liberal vs. Conservative confrontation, it failed to appease the concerns fought over during La Violencia. Liberals and Conservatives took advantage of nationalistic sentiments to promote laws that benefited the wealthy (Bushnell, 1993, pp. 223-248; Hylton, 2006, pp. 51-66).  Unemployment was on the rise, and the lack of economic reforms only worsened conditions for farmers. The National Front was supposed to be an end to La Violencia, but it only ended the war, not the land inequality. This period would shake the country’s political structure, notably with the rise of guerilla groups.

During the Economic Stage (1953-1958) of La Violencia, organized bandits and guerrillas rose while the government’s capacity fell. As the war deepened the divide between Liberals and Conservatives, some Colombians felt their government was powerless to change. Due to this lack of power, left-wing groups like the Revolutionary Armed Forces of Colombia (FARC) gained influence through threats of death and property destruction. The FARC began with 48 members who had retreated to a mountain to avoid both Colombian and American armed forces. Despite their destructive methods, though, guerrilla groups were able to mobilize peasants to fight by promising to address their ignored concerns (Stanford University, 2019). At the same time, right-wing paramilitaries emerged. Initially, right-wing groups were to support the Colombian Armed Forces’ fight against communist guerrillas as the guerillas grew in size and terror. In 1968, Law 48 passed by executive order legalized civilian involvement in the war. The new Ministry of Defense armed civilians, involving them with troops from participation in training to military deployments. The problem with legalizing right-wing guerrillas, however, is that it almost demands authoritarian control. When the Colombian government lacked this power, right-wing groups turned into downright terrorist organizations. The line between paramilitary, guerrilla, and military became increasingly entwined.  A 1983 investigation by the Inspector General found that of the 163 individuals involved with Muerte a Secuestradores or MAS, a new paramilitary, 59 were active military and police officers. MAS permeated politics as well. Guerillas would kidnap influential politicians and businesses for ransoms or demands. For the left, participation in politics was explicit: the FARC quite literally founded a political party. Union Patriotica, meant to unite Colombians outside of the traditional liberal and conservative spectrum, included guerrilla members, trade union members, and community activists. In elections, they performed much better than other leftist parties. Still, they were not immune to attacks. Paramilitary groups and the military killed dozens, if not hundreds, of UP members and their allies only due to ideological differences. In this sense, the root of this terrorism lies in La Violencia (Human Rights Watch, 1996).

One significant economic effect of La Violencia has been the increased displacement by rural workers. Competition for the best land was an essential factor of La Violencia. Between 1948 and 1966, around 40% of farms were abandoned, and more than 20% of the rural populations were forcibly displaced (Springer, 2006, p. 2). In the end, peasant farmers found themselves caught in the middle again. We see that La Violencia, in effect, only worsened inequality in the country. There is little doubt that agrarian reform, specifically land equality, was not prioritized during war years. Consequently, many workers sought out better opportunities elsewhere. There are a few reasons for this displacement. First, La Violencia reversed many labor laws that had caused the agriculture sector to boom due to high coffee prices (Colombia’s best export). President Gomez had purged Liberals, maintaining a Conservative government. As a result, Colombia’s spending on public expenditures was slow to catch up to other Latin American countries. State-owned enterprises’ expenditures on the public sector only accounted for 8.4% of the GDP. This pales in comparison to the next highest in Latin America, Argentina, at 19.5% (Bulmer-Thomas, 2014, p. 354). Second, Colombia manufacturing exports dramatically increased from $6.9M to $775.3M between 1960 and 1980 (Bulmer-Thomas, 2014, p. 377). For poor laborers, this boom meant new opportunities in urban centers. By developing Colombia’s export growth in cities, they benefited from better employment and a greater quality of life. Urban cities like Bogota were developing quicker than the countryside due to politicians’ moves towards modernization. Third, while working in the agricultural sector was honest work, coffee was beginning to take a backseat to cocaine. Paramilitaries and guerillas like the FARC moved into producing and trafficking drugs. To keep profit margins low, rural workers were to grow coca in masse. Cartels, drug trafficking organizations, ran these coca fields like small towns to maximize revenue and order. These operations made rural life dangerous, void of independence, and unequal.

Ignoring the lower class has been a recurrent problem in Colombia since its independence. La Violencia was rooted in “liberals against conservatives” conflicts, but mainly fought by farmers, laborers, and other rural peasants. Unfortunately, La Violencia, like its name suggests, was marked by extreme terror. Quickly, the war turned into peasants vs. peasants; the original partisan conflict was taking a backseat. With this backdrop, it was inevitable that guerilla groups rose. Initially, disorganized bandits provided protection, but as soon as 1953, they were extorting, murdering, and stealing from those they claimed to be helping.

Moreover, it only got worse from there. The country’s political system, the National Front, fueled paramilitary and left-wing groups further with its unsuccessful social reforms. Today, Colombia continues to suffer from its decades of war economically and politically.  It may very well be impossible for Colombia to undo the damage caused by La Violencia. Yet the country has been looking up. It is the fastest-growing economy in Latin America (Colombia is the fastest growing economy, 2020). Part of the reason for this lies in the government’s continued attempts to make peace with guerilla groups. Notably, the 2016 Peace Agreement with the FARC definitively created a bilateral ceasefire. Nevertheless, a peace agreement and economic growth are not enough to fix political and economic issues. La Violencia, as any Colombian would likely tell you, runs much deeper than what the simplicity of its name suggests. 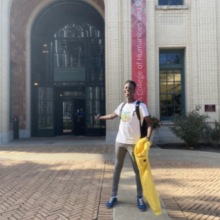 Sam Abodo
Sam Abodo is a freshman at the Dietrich College of Carnegie Mellon University, majoring in International Relations & Politics. Since January, he has been assisting in researching heads of state with Dr. Ignacio Arana. Currently, he is a government relations intern for a political consulting group. After graduation, he hopes to enter Law School.