Julian Assange's Ecuadorian citizenship is anything but a sign of friendship 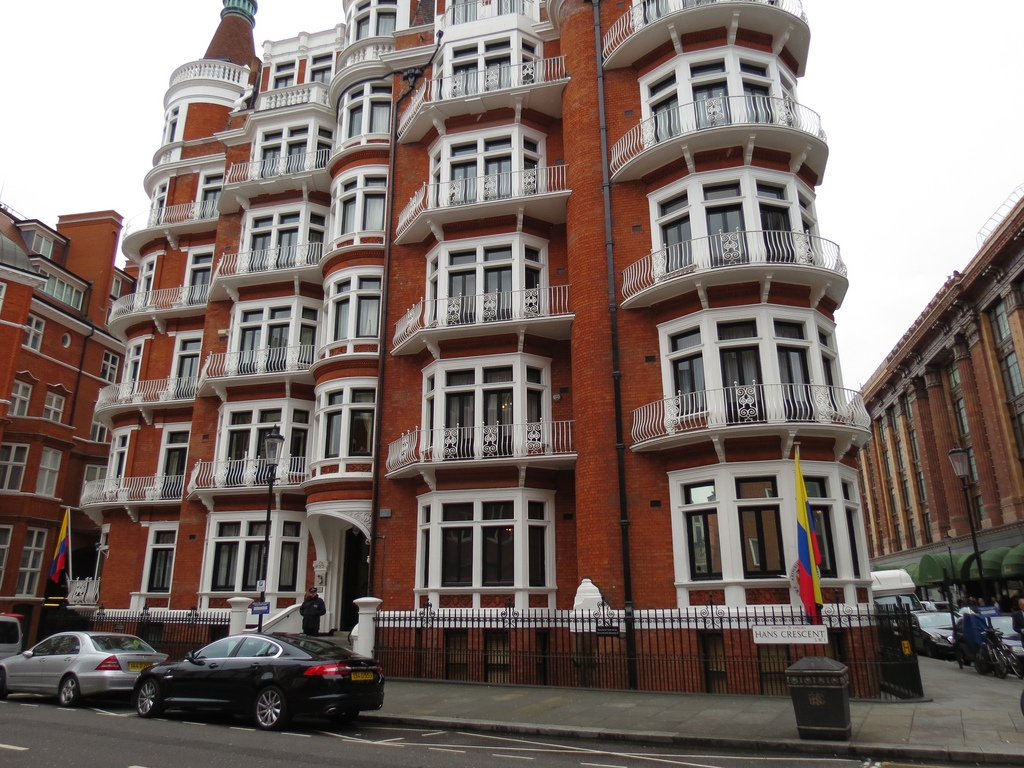 At the opening of the new year, Julian Assange tweeted out a photograph of himself in an Ecuadorian soccer jersey.  The gesture, while not immediately grabbing anyone’s attention, was seen in hindsight as a subtle clue towards Assange’s newly granted citizenship.

Despite the development in his status, though, Assange remains cornered in Ecuador’s embassy in Britain, where he has been since August 2012 whenever the country granted him asylum.  While Ecuador’s foreign minister María Fernanda Espinosa stated that his recent citizenship offers Assange an added cushion of protection to any future legal affairs that may come his way, it fails to give him the right to leave the Knightsbridge embassy, which he only would have achieved if he had been granted diplomatic immunity (Ayala & Erlanger 2018).

Assange’s lengthy relationship with Ecuador is anything but simple; in 2010, Sweden chased the Wikileaks founder following allegations that he was involved in a number of sex crimes (Sharman 2018).  After fleeing bail, Assange took refuge in Ecuador’s embassy in London, aware that he faced extradition to Sweden the moment he left the building.

Naturally, an arrangement with Ecuador was beneficial to Assange, as he gained safety within its fully-furnished embassy from the charges Swedish prosecutors placed on him, and later the lesser charge of bail jumping fixed by the British.  At the time, though, Rafael Correa, Ecuador’s past president, uniformly profited from the accord.

Following the initial WikiLeaks scandal, Ecuador was quick to offer Assange a home, with its then deputy foreign minister, Kintto Lucas, promising the Australian a no-strings-attached place to stay, with a secondary provision that he lecture and share the information he counted among his assets.  Although Correa initially rejected this proposal as an unauthorized decision, after failing to gain preferential trade treatment with the United States, the president granted Assange asylum the next year, well aware of the plethora of sensitive information (more than 1,600 cables from Quito’s U.S. embassy) that Assange could deliver.  Ecuador and Correa had already been impacted by WikiLeaks, with information surfacing about potential bribery and extortion in relation to the country’s chief of police, a relationship between Ecuador and the Revolutionary Armed Forces of Colombia (FARC), and presidential campaign funding to back Correa coming from the Venezuelan government and the FARC (García, Carlota & Malamud 2012).

What is more, with pressure growing against the notion of U.S. imperialism, Assange was seen as a champion of leftist ideals and an easy front for Correa’s government to show its distaste for U.S. interference.

Assange warmly accepted Ecuador’s invitation, not only citing the charges from Sweden and the U.K. as motivation, but also his fear of being placed on trial in the United States on account of espionage.

While Assange did make some dents in the United States’ image, releasing information like the Iraq and Afghanistan war records, diplomatic cables, Guantanamo Bay detention camp procedures and even videos of U.S. soldiers shooting at unarmed Iraqis, there is no real evidence that the country ever had plans to bring Assange in (Alexander 2016).

In fact, a 2013 article in The Washington Post revealed that the Justice Department determined it had no way of prosecuting Assange.  Matthew Miller, a former spokesman for the Justice Department, explained that it would impossible to put the Australian on trial “...for publishing information without the same theory being applied to journalists” (Alexander 2016).

However, in April of last year, U.S. Attorney General Jeff Sessions held that the arrest of Julian Assange was still a top concern for his department.  If convicted, Assange could face up to 45 years in prison (Rothwell, Ward & Nianis 2017).

The UK Home Office has consistently denied requests to confirm or deny whether or not the United States has ever submitted an arrest warrant, leading Assange and his WikiLeaks coworkers like Kristinn Hrafnsson to say that they will not believe any promises “short of an open, official, formal confirmation that the US government is not going to prosecute WikiLeaks” (Alexander 2016).

With Assange showing no signs of leaving the Ecuadorian embassy, it seems as though almost all parties involved are giving up hope.  In 2015, the Metropolitan Police finally gave up its twenty-four/seven security presence outside of the embassy, a practice which was believed to have cost over €12 million (Rothwell, Ward & Nianias 2017).  Swedish prosecutors also dropped the charges against Assange, not based off of a true verdict, but rather because it was seen unlikely that he would ever resolve to leave the embassy building (Ayala & Erlanger 2018).

One unlikely player, though, is growing restless.  Ecuador, which was so fond of Assange in the wake of the WikiLeaks fiasco, is now struggling to contain its extended house guest with president Lenín Moreno, who does not share Correa’s admiration.

Moreno had warned Assange that he did not want him meddling in any political matters, making him sign an agreement to not intervene in the politics of Ecuador and other countries alike as a stipulation for his citizenship (Kerr 2018).  When Assange tweeted his support of Catalan separatists earlier this year, Moreno established his earnestness by cutting off the embassy’s Internet access, stating that “the Ecuador government warns that the conduct of Assange via his messages on social media puts at risk the good relations that Ecuador maintains with the United Kingdom, the European Union and other nations” (Booth & Adam 2018).

In addition to his tweets about the present circumstances in Spain, Assange has also voiced his opinion on Facebook’s data breach, President Trump’s choice for national security adviser, and French politician Nicolas Sarkozy’s connection to Libyan dictator Moammar Gaddafi (Booth & Adam 2018).  Many supporters of Assange have suggested that Ecuador’s stricter management of the WikiLeaks founder is derived from pressure from the United States and Spain, and is not a reflection of Ecuador’s true sentiments.

However, others could just as easily estimate that Moreno and his advisers are working to push Assange out of the embassy for once and for all.  While his newly minted citizenship seems to be a token of friendship between Assange and Ecuador, it may alternatively be a negotiation tool to work with London to devise an exit strategy for the embassy’s tenant.

Alexander, Harriet. 2016. “Why is Julian Assange still inside the embassy of Ecuador?” 4 Febuary. The Telegraph. Available to read here: https://www.telegraph.co.uk/news/worldnews/wikileaks/11681502/Why-is-Julian-Assange-still-inside-the-embassy-of-Ecuador.html [Accessed 17 April 2018].

Rothwell, Ward & Nianias. 2017. “Julian Assange emerges on embassy balcony to say he will not ‘forgive or forget’ as Swedish rape investigation is dropped.” 19 May. The Telegraph. Available to read here: https://www.telegraph.co.uk/news/2017/05/19/sweden-drops-julian-assange-rape-investigation/ [Accessed 17 April 2018].