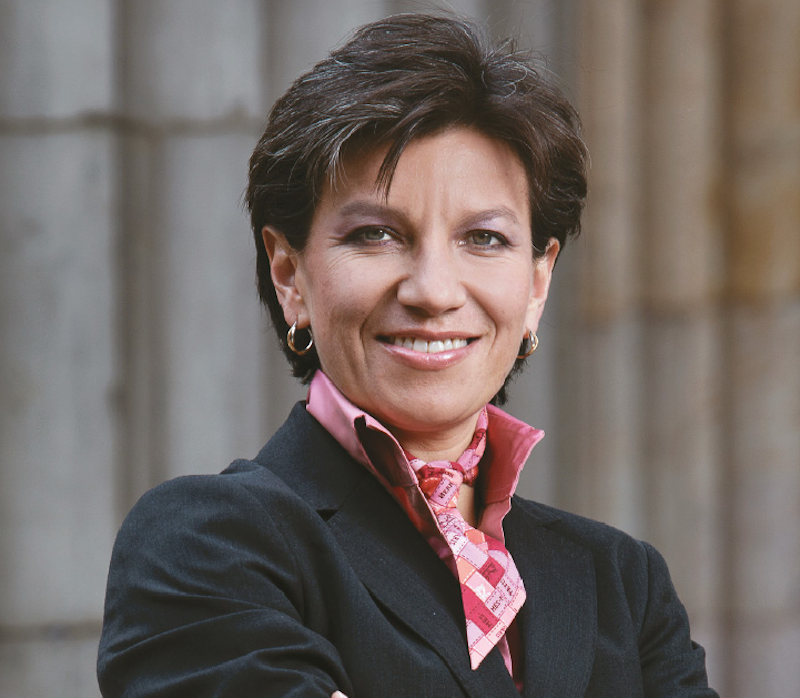 In 2019, Claudia López Hernández made history as the first woman and first LGBTQ+ member ever elected as mayor of Bogotá, Colombia. López first entered politics in 1989 during the student movement which followed the assassination of Colombian presidential candidate Luis Carlos Galán. Galán in fact was the father of her running mate for mayor, Carlos Fernando Galán (Castillo & Ramsay, 2019). In an interview with CNN, López explained, “Colombia is the only country in which the same political families from the 20th century are still governing in the 21st century” (Castillo & Ramsay, 2019). She went further to explain that while the country is advancing, the culture of machismo remains ever-present.

As mayor, López wants to focus on fighting corruption, promoting public education and supporting infrastructure. She grew up in a working-class neighborhood in Bogotá and earned a Master’s in Public Administration and Urban Policy from Columbia University of New York. She went on to earn her PhD in Political Science from Northwestern University (Castillo & Ramsay, 2019). Because the capital acts as an immense cultural and urban hub of Colombia, the Bogotá mayor is often considered second in importance to the president (Castillo & Ramsay, 2019). In fact, the Bogotá mayor was appointed by the sitting president until 1985. López additionally serves as the first LGBTQ+ mayor of any capital city in the Americas (Sandoval, 2019).

How does the election of an openly gay woman to the highest mayoral position reflect the beliefs of Colombians? Do Colombians believe in the efficacy of female and lesbian political leaders?

We can investigate the perceptions and opinions of Colombians in regard to women and LGBTQ+ members through the World Values Survey Association (WVSA). In 2018, a year before the election of López, several surveys were given on the efficacy of women as political leaders and the acceptance and justifiability of homosexuality. When asked if men make better political leaders than women do, 5.6% agreed strongly, 18.6% agreed, 65.1% disagreed, and 10.8% disagreed strongly (World Values Survey Association, 2018). From these responses, over three-fourths of Colombians disagree with the claim that men are better political leaders, and likely believe in the viability of female politicians. However, the acceptance and perceived justifiability of homosexuality in Colombia did not receive as optimistic of a response. When the WVSA administered a survey to measure acceptance levels of homosexual individuals, 51.6% scored low in acceptance, 24.4% scored medium in acceptance, and 23.9% scored high in acceptance (World Values Survey Association, 2018). The organization also surveyed participants on their perceived justifiability of homosexuality. Using a scale from 1 to 10, a rating of “1” represented that homosexuality is “never justifiable” and a rating of “10” represented that homosexuality is “always justifiable.” 44.7% responded with a “1,” 14.7% responded with a “5,” 13.9% responded with a “10,” and the remainder of the respondents fell relatively even on the other numbers of the scale (World Values Survey Association, 2018). The responses demonstrate that a significant majority of Colombians who participated are either unaccepting or unable to see justifiability for homosexuality. Homophobic beliefs carry large implications for LGBTQ+ rights and the possible discrimination that individuals may encounter.

On paper, Colombia has been at the forefront of the LGBTQ+ movement in Latin America. In 2015, trans individuals over 18 received the right to changer their legal gender on all identification documents. Same-sex marriage was legalized in Colombia the following year (Bocanumenth, 2020). Legislation to uphold LGBTQ+ couples adoption rights, protection from employment discrimination and hate crimes, and explicit penalties for acts of gender-based discrimination have also been introduced in recent years. The 2016 peace agreement between FARC and the Colombian government included 41 different gender specific provisions and recognition that LGBTQ+ people were disproportionately affected by armed conflict (Bocanumenth, 2020).

Despite promising new laws and legislation, discrimination toward LGBTQ+ people continues in Colombia. Persistent evangelical and conservative Colombians have continued to fight against greater recognition for gender and sexual minorities. In 2014, a student named Sergio Urrego died by suicide after facing discrimination from school officials because of his sexual orientation (Bocanumenth, 2020). Since the tragedy, schools have published manuals on how to address and prevent discrimination against LGBTQ+ students in schools. Nevertheless, conservative sectors have argued against such teachings, claiming the Ministry of Education is “promoting homosexuality” among students (Bocanumenth, 2020). Violence also threatens many LGBTQ+ members as a result of heightened prejudice and discrimination. Between 2014 and 2018, 545 LGBTQ+ Colombians were assassinated (Bocanumenth, 2020). Trans individuals who are sex workers face especially high levels of violence and harassment. Because sex work is a stigmatized profession, transphobic violence does not receive appropriate recognition in regard to reported attacks in these settings (Bocanumenth, 2020).

While prejudicial beliefs, discrimination, and acts of violence tell one story, laws, legislation and elections speak another. Many believe that the recent rights granted and the election of LGBTQ+ individuals like Claudia López Hernández prove that Colombia is moving in the right direction. A popular Colombian film critic, Pedro Adrían Zuluaga, explained that López’s win “isn’t about an isolated lucky incident, but is rather the product of previous fights” (Sandoval, 2019). In 2018, Mauricio Toro became the first openly gay man elected to the Colombian Congress, and later spoke on López’s victory: “The city has followed the logic of electing someone who knows how to govern, above all […] and that doesn’t depend on anyone’s sexual orientation. That depends on a person’s talent and abilities to take on that responsibility” (Sandoval, 2019). Are new platforms of representation enough to change the culture of machismo, and transform public opinion? The future of inclusive behavior, rights, and acceptance for LGBTQ+ individuals in Colombia will shed greater light on the potential shift toward progress.

Bocanumenth , M. (2020). LGBT+ Rights and Peace in Colombia: The Paradox Between Law and Practice. WOLA. https://www.wola.org/analysis/lgbt-rights-and-peace-in-colombia-the-paradox-between-law-and-practice/