Haiti in Crisis as Mass Protests Shut down the Island 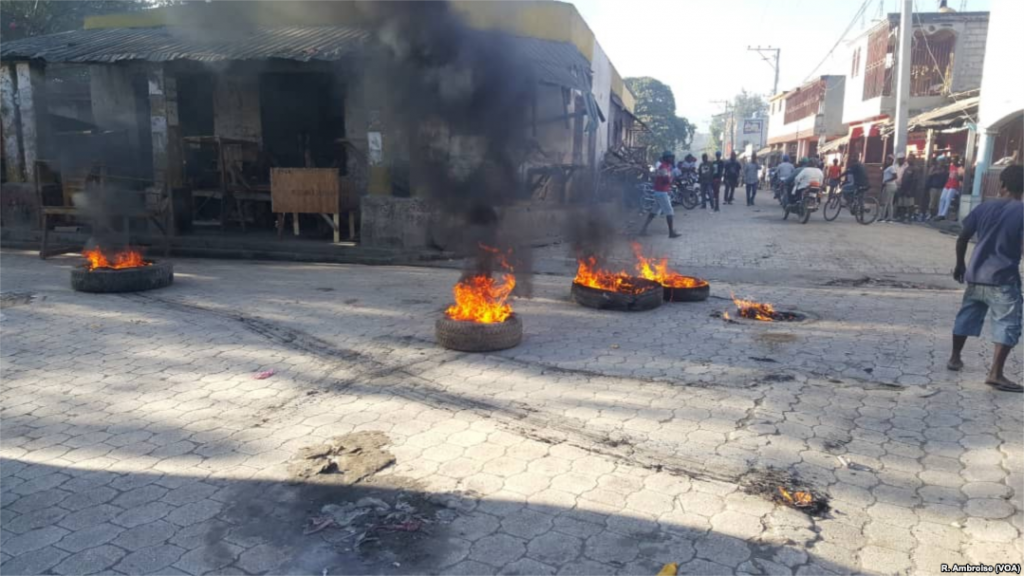 Nearly a year later, and Moïse still refuses to step down. Despite offering to negotiate economic policies and political ‘compromises’ with his opponents in order to appease the protestors, Moïse still has not reached any agreement that has been satisfactory. On October 11, 2019, thousands of protestors began looting stores and attempted to break through barricades that lead to the President’s residence in what was the largest protest in weeks (Coto, 2019). Police and protestors clashed, as civilians blocked police from reaching the center of the protests. Police fired tear gas and bullets into the air and protestors responded by spilling oil and burning tires in the streets (Coto, 2019). As protests grow increasingly violent, it's essential to understand why Haitians are unhappy, and the government’s response.

Protests began after reporter Néhémie Joseph of the Haitian news outlet Radio Méga was found murdered in his car in the town of Mirebalais, northeast of Port-au-Prince. According to a Facebook post by Joseph, several politicians had threatened him following one of his shows, claiming that he was guilty of inciting protests (Coto, 2019). In addition to Joseph’s death, there have been approximately 30 deaths in the demonstrations, with 15 of those people killed by police officers. There have also been almost 200 civilians reporting injuries in the past month in Haiti (Semple, 2019). Haitians lack food, medical care, electricity, and security, and feel that their government is doing little to help the people.

These sentiments are not unfounded, as top Haitian government officials have been accused of misusing at least $2 billion in funds that were meant for social programs and the President’s own company has been mentioned in several allegations of this case as well as other corruption charges. The political environment in Haiti is severely harming the wellbeing of Haitians, as protests increase, ports are shut down, businesses are left empty, nearly 2 million children are unable to attend school, and civilians are unable to leave their houses without fear of being injured or killed (Blackwell, 2019). Those leading these protests explain that things must change. Although Moïse continues to offer negotiation talks with the opposition, the only outcome that Haitians will accept is Moïse’s resignation. Who are the leaders of the Haitian protests?

Interestingly, some of the main leaders in the Haiti protests are members of the Haitian art community. Others are unemployed Haitians who lost their jobs due to a failing economy, and other protest leaders are supporters of the opposition party (Blackwell, 2019). Overall, these protests are led by various different Haitian civilians with different beliefs, social classes, and neighborhoods— and they are all struggling with daily necessities due to corruption in Moïse’s administration. As Haiti’s economy worsens and the small island nation’s people are left without food, medicine, and safety, Haiti is beginning to look more and more similar to the humanitarian crisis in Venezuela. The two nations are becoming eerily similar in terms of crises, as is evident through one New York Times report.

The New York Times Journalist, Kirk Semple, reported on a hospital in Léogâne, Haiti. Sainte Croix hospital was left with a single day’s supply of oxygen, and hospital workers were forced to decide if adults recovering from strokes or in fatal need of oxygen would receive it, or if oxygen-deprived newborns in the neonatal ward would get the oxygen. Essentially, hospital workers were forced to decide who in their hospital would live and who would die due to a medical shortage that could have been prevented had the government properly used funds for aid and social programs.

Other hospitals have been forced to shut down due to gas shortages, and public transportation has been halted for weeks (Semple, 2019). In the case of the Sainte Croix Hospital, and emergency shipment of oxygen fortunately, reached the patients in time so that hospital workers were not faced with deciding the fate of their patients based on oxygen shortages, however, other hospitals and patients have not been so lucky, and such shortages are only getting worse. Human Rights groups have been little help to the nation as protests have shut down roads and ports, and actions by UN PeaceKeepers in the country have been controversial to say the least.

In Haiti, the United Nations ended its 15-year long peacekeeping presence on October 15th. This UN peacekeeping force has been accused of insulting Haitian sovereignty through a “stabilization mission” following a coup that forced out President at the time, Jean-Bertrand Aristide (Wisner, 2019). During this mission, titled MINUSTAH, UN peacekeepers killed over 20 women and children during a raid targeting criminal gangs, and “engaged in widespread sexual exploitation and abuse of women and children, with perpetrators generally returning home without prosecution or accountability.

In 2015, Haiti had one of the highest rates of sexual abuse and exploitation of any peacekeeping mission in the world” (Wisner, 2019). Perhaps even worse, this force also created a Choleric Epidemic in Haiti that killed over 10,000 people and affected more than 800,000 people since 2010 as a result of improper disposal of human waste by MINUSTAH (Wisner, 2019). MINUSTAH’s successor mission, MINUJUSTH, ended on October 15th and marked the beginning of a new UN proposed 30-member political mission to the nation. Understandably, Haitians are not trusting the mission due to the tragic and unforgettable past experiences.

The United Nation’s news page explained this new mission to Haiti and its goal to assist in bringing stability to the island through the implementation of its 2030 Agenda for Sustainable Development. “In the light of on-going instability across Haiti and this week’s transition away from fully-fledged peacekeeping operations, the UN chief António Guterres on Thursday promised ‘the continuous commitment of the Organization “to support the Haitian people on their path to peace and development” (UN News, 2019). Although there is hope in the international community that this new peacekeeping stability mission might bring an end to the violence, corruption, and lack of resources that is causing Haitians to suffer so much, civilians of the island nation are uninclined to believe that the UN might be able to help bring an end to their suffering, and very strongly believe that the only way conditions will improve, is with the resignation of Jovenel Moïse.