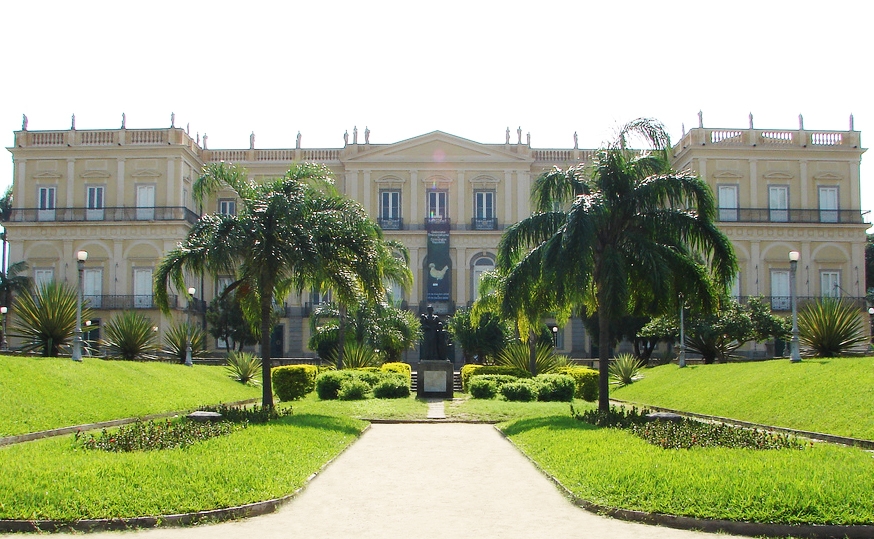 This past Sunday, September 2nd, 2018, a fire broke out in Rio de Janeiro’s National Museum of Brazil. The fire was devastating, almost entirely destroying the historic building and thousands of national and international artifacts. The building itself, which began construction in 1803 was known as Paço de São Cristóvão, and was once home to the Portuguese Royal Family. After Brazil’s independence in 1822, it became the palace of the Brazilian Emperor. Following resistance against the Emperor’s rule in 1889, the museum was left abandoned until 1892, when it was repurposed into the National Museum of Brazil. Prior to its recent destruction, the museum was home to one of the largest exhibits of the Americas (Brown, 2016). Among the museum’s most precious artifacts was “Luzia”, the 12,000-year-old remains of a woman, and the oldest human remains discovered in Latin America (Stargardter, 2018). Though countless other artifacts were lost in the flames, this devastation was something that museum officials claim could have been prevented and was not the first issue to befall the museum in recent years. When firefighters arrived at the scene on Sunday, the fire hydrants closest to the museum were broken, forcing the firefighters to use water from a nearby lake. The lack of functionality of the fire hydrants is indicative of an infrastructure issue that must have existed for some time. Additionally, just five months before the fire, the museum was forced to shut down it’s dinosaur exhibition due to a termite infestation (BBC News Latin America and Caribbean, 2018). These complications are not a result of lack of oversight or dedication by the employees. In fact, the museum employees have been fighting for years to gain access to more funding, and some museum workers even worked desperately with the firefighters to salvage as many artifacts as they could. The tragedy at the National Museum of Brazil this past Sunday is only one of the many consequences that may befall Brazilian museums as well as many other institutions that are in desperate need of government funding.
Managed by the Federal University of Rio de Janeiro, the museum and University have suffered together due to major federal budget imbalances. According to BBC News, “the deficit was about 8% of GDP in 2017, only slightly down from a record 10% two years earlier” (BBC News Latin America and Caribbean, 2018). While investigating the source and conditions of the fire, federal prosecutors found that over a year after the creation of fire prevention standards in 2017, many federal institutions have not yet published their standards (Phillips, 2018). Brazilian local governments have demanded funding from the federal government for the maintenance of Brazil’s 14 UNESCO Cultural Heritage Sites and 7 natural heritage sites for years, but despite the regulations agreed upon in 2017, no funding was provided in order to meet the standards. The entire state of Rio de Janeiro is facing a budget crisis, resulting in imbalanced funds for many institutions. Museum officials have been vocal about how the lack of funding from the Brazilian Government caused the massive museum fire, and museum employees and Brazilians alike, are furious (BBC News Latin America and Caribbean, 2018).
The fire at the National Museum of Brazil elicited extreme responses from many Brazilian people, representing more than just a poorly maintained historical site, but an economic matter that affects Brazilians daily. On the night of the fire, protestors took to the streets, angry about the spending cuts connected to the museum’s substandard conditions and ultimately the fire. Some protestors even tried to enter the museum’s property while the building was still ablaze. Rio police forces responded with riot gear and pepper spray to control the crowd. A majority of the protestors were students from Rio’s Federal University, and had been struggling with Federal budget cuts in their own educational programs long before this past week’s fire. An anthropology student who frequented the museum reported to CNN that “The anthropology department went through absurd budget cuts from the federal government during the past two years. In my class alone, it was around 70%” (Berlinger, 2018). The imbalance in the Brazilian government’s spending is reminiscent of the 2016 Olympic Games and the 2014 World Cup hosted in Brazil. Presidents at the time, Dilma Rousseff and Michel Temer, were blamed for the mismanagement of funds following these events, and the current administration is feeling the pressure to avoid following in the footsteps of their predecessors (Berlinger, 2018).
Educational Institutions and historical sites are just a few of the many sectors in Brazilian society that suffer from a lack of federal funding. In an attempt to pull its economy out of recession, Brazil’s federal government “approved freezing public investments on science, technology, innovation, education, and health care for the next 20 years” (Siquiera, 2017). This 2016 decision is just one of the reasons that the issue of mismanaged federal funds will not likely be resolved easily. As the Brazilian Presidential Elections near, candidates are addressing the museum fire to display their stance on the government’s spending habits.
President Michel Temer described the loss as “insurmountable”, however, his opponent Marina Silva, took a different stance on the matter. Silva claims that the fire was a “tragedy foretold”, due to federal funding cuts in institutions of higher learning (Berlinger, 2018). As hundreds of thousands of artifacts, and thousands of years of Brazilian history was lost in the flames of the museum, the fire is almost metaphoric to the losses that Brazilians suffer everyday due to Brazil’s current economic crisis. Just like the future of the museum, the future of the Brazilian people relies greatly on the results of the upcoming Presidential elections, and how the winning candidate will work to restructure Brazil’s federal budget.