Ecuador’s End of Fuel Subsidies: The State of Emergency and Protests 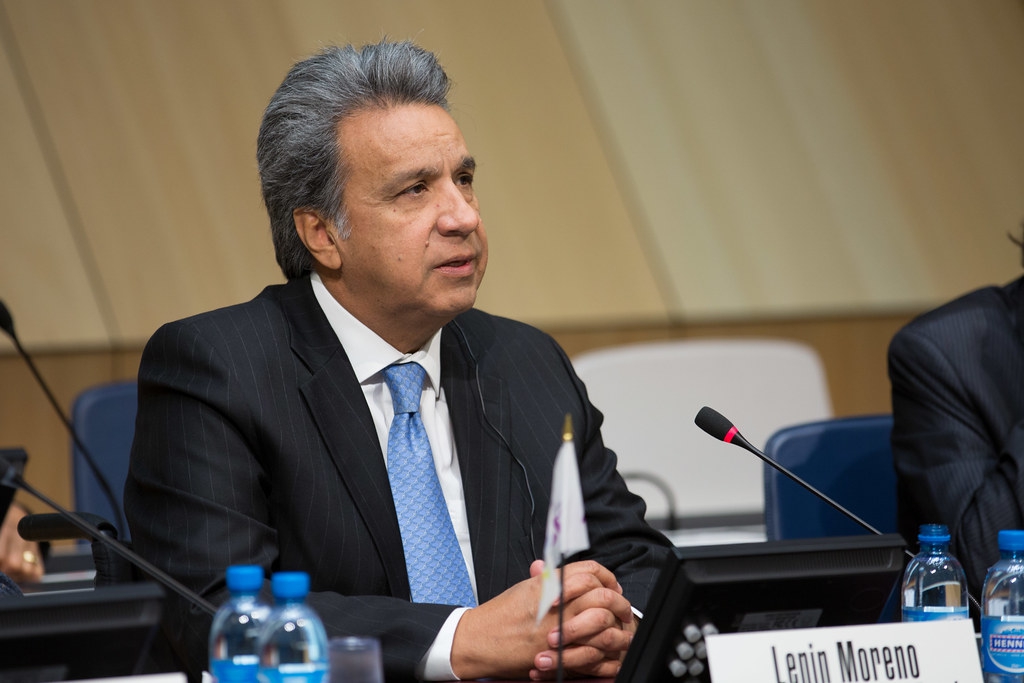 Protests have broken out all over Ecuador, particularly in the capital of Quito, causing the President Lenín Moreno, to declare a state of emergency. The protests have emerged after oil prices have risen due to the president's decision to end fuel subsidies. These subsidies have been in place for 40 years, and according to BBC, they cost the Ecuadorian government $1.3 billion annually. These protests have been led by student groups as well as workers of the transportation industry and have continuously lasted throughout the past week. Enough so that on Oct. 8, 2019 Lenín Moreno, “moved the seat of his government from Quito to the coastal city of Guayaquil” (León Cabrera 2019) to protect his administration from the demonstrations.

Lenín Moreno has served as President of Ecuador since May of 2017, and prior to this served as Vice President from 2007 to 2013 under former President Rafael Correa. In his presidential campaign, Moreno ran with the PAIS Alliance party, a center-left democratic socialist party, however, after assuming office, he began to stray from his campaign platform. Since assuming his role in office, Moreno has distanced himself from the previous president and has engaged in actions to repeal Correa’s past policies and limit Correa’s future power. According to North American Congress on Latin America, “The Latin American left, against the backdrop of a resurgent right turn, was relieved: onlookers expected Moreno to continue the progressive advances of his predecessor, Rafael Correa...But once in office, Moreno swiftly pivoted on his campaign promises, governing with a right-wing neoliberal agenda” (Schützhofer 2019). This neoliberal agenda Schützhofer references includes a reduction of public spending, trade liberalization, and flexibility of the labor code. Moreno took action by proposing the Ley de Fomento Productivo, or Productive Development Law, which was approved in the Ecuador legislature. The law was implemented to promote productivity, investments and balance the country's budget, but has been criticized for “the benefits it heaps on the wealthy while negatively affecting the state’s capacity to fund social services” (Telesur). In relation to this switch of economic and political ideology comes Moreno’s decision to end a 40 year oil subsidy.

In the past week, President Moreno declared that the fuel subsidy is no longer affordable for Ecuador and has decided to cut it as part of his plan to “ease debt burden” (BBC). In doing this, Moreno’s administration pulled out of the Organization of the Petroleum Exporting Countries (OPEC). Ecuador is one of the smallest of the fourteen members of OPEC, and reported their departure due to fiscal reasons. “Ecuador produces about 545,00 barrels per day (bpd) of crude oil, but is struggling with tight liquidity because of a wide fiscal deficit and hefty foreign debt” (Valencia 2019). The Energy Ministry of Ecuador declared that this action is to further the government’s plan of reducing public spending, generating new income, pumping more oil, and increasing revenues. In doing this, oil prices are likely to rise, workers’ conditions may decrease, and private operators may take over state-owned firms. “In a bid to combat debt, President Moreno has implemented market-friendly policies and begun an austerity plan that includes layoffs of workers at state-owned companies and cuts to gasoline subsidies” (Valencia 2019). These austerity policies are what has caused the people of Ecuador to take to the streets and protest.

According to Reuters, “ prices of diesel rose from $1.03 to $2.30 per gallon on Thursday, while gasoline rose from $1.85 to $2.39.” According to BBC, “prices of diesel and petrol are expected to more than double.” These changes have caused protests that have resulted in the blockages of roads and communal spaces. Among the protestors include specific groups such as indigenous rights groups, students, unions, transportation workers and specifically the Federation of Taxi Drivers of Ecuador and CONAIE, Ecuador's national indigenous federation. Masked demonstrators have met with police while approaching the presidential palace that is located in Quito’s historical center.

Due to the severity of these protests, Moreno has fled Quito and has issued a state of emergency. The declaration of a state of emergency in Ecuador allows Moreno to exercise greater actions,  including the restriction of personal freedoms and the deployment of armed forces to maintain the order of protests (BBC). These protests have resulted in the use of tear gas and water cannons by riot police, injuring many, and leaving five dead (Brown 2019). These protests have also come as a criticism of Moreno’s deal with the International Monetary Fund. In March of 2019, Ecuador agreed to a $4.2 billion deal with the IMF allowing Ecuador to receive “an immediate disbursement of $652 million and opened the door for an additional $6 billion in loans” (Valencia 2019). These loans are generally not accessible to countries with high public debt like Ecuador, but the cut of fuel subsidies was a part of the loan’s agreement with the IMF in order to obtain these loans. In the dispute against Moreno’s policies, protesters have taken over three oil facilities in the Amazon (France 2019), furthering the economic hit Ecuador is taking. The Energy Ministry has responded to these protests and unrest by “shutting down one of the country’s two domestic oil pipelines, effectively suspending two-thirds of its distribution of crude” (France 2019).  The actions by the people is placing pressure on Moreno and his administration, but is also placing further pressure on the economy and oil industry that could perpetuate the rise in prices. Moreno has since claimed that his government is working and negotiating with protestors to de-escalate tensions in the country, however has refused to resign (Solano 2019).

In this demonstration of civil discontent among the people, many have suffered injuries, and according to the Associated Press, Red Cross has since suspended its emergency response services due to “security concerns” (Solano 2019). They have cited violence towards their workers during their attempts to aid the injured. The government has stated that 700 people have been arrested during the protests, and while Moreno tries to negotiate a moderate solution, the demonstrations and sentiments among the people remain fueled. Various Indigenous groups have vehemently shown their opposition to Moreno’s actions through these protests and by implementing the shut down of various oil facilities. “Indigenous groups condemn the deal with the IMF, saying austerity measures will deepen economic inequality” (Solano 2019).  Indigenous groups in Ecuador have played a critical role in protests, especially in ousting presidents. “Most recently in 2005, Lucio Guitérrez’s attempt to introduce austerity measures under an IMF agreement prompted tens of thousands to protests, and lawmakers voted to remove him” (Brown 2019). Indigenous groups have stated that Moreno’s policies have led to increased oil and mining in indigenous lands as well as increased transportation costs that disproportionately affect indigenous farmers.

In the coming weeks, we will see if these political protests will be enough to persuade President Moreno to reverse his austere policies and agreement with the International Monetary Fund, or if he will continue his economic transformation in lieu of the people’s interests. We will see how indigenous groups, transportation workers, and the public of Ecuador as a whole responds to Moreno’s actions and whether these protests will continue if they are unsatisfied with the results. In viewing Ecuador’s current fight struggle against new economic policies, we are reminded of how pertinent the people’s voice is in a democracy. Ecuador shows us here how political protests are continued to be used to pressure political elites to answer to the concerns of the people.