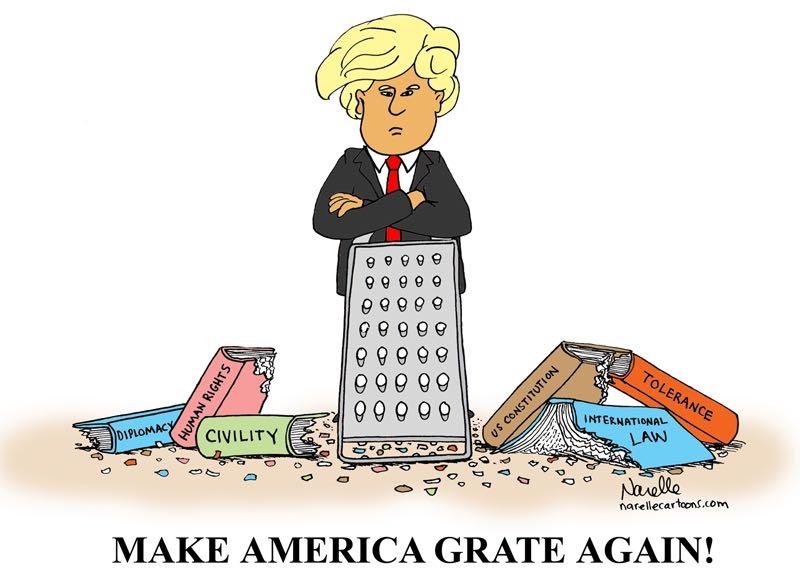 “Conceptually, we may call truth what we cannot change; metaphorically, it is the ground on which we stand and the sky that stretches above us.”

Trump has pledged to completely overhaul U.S. immigration policy.  His plans rest on what he calls “three basic principles:”

The extensive plans he has for our immigration policies are too vast to discuss at length here, but this article will attempt to take a closer look at some of the most outrageous and brazenly unconstitutional plans.  A subsequent article will examine other policies next week.

Trump has made a lot of noise, pledging to round up and deport the entire undocumented population, by the Pew Research Center estimates, 11 million people, within two years. In total, there are 41 million immigrants in the United States.

A recent study concluded that effectuating that many removals within two years would require an increase from 4,844 to 90,582 immigration agents; from 34,000 to 348,831 immigration detention beds; and corresponding increases in immigration courts, attorneys, and transportation. Trump’s mass deportation scheme would also mean arresting more than 15,000 people a day on immigration charges, seven days a week, 365 days a year.

There is no conceivable mechanism to accomplish this sort of endeavor while respecting basic constitutional rights. Especially when one considers the fact that most undocumented immigrants are not readily identifiable as such, unless they have come to the attention of immigration authorities. In fact, most noncitizens who are eventually placed in removal proceedings have either come in contact with the criminal justice system or are detained at the border. To carry out his mass deportation scheme, Trump would have to cast his net far deeper into American communities and deep into the taxpayer’s pockets.  But even if it were conceivable that Trump could come up with a way to cover the costs, the mission would deeply wound our civil liberties, because it would have to  inevitably rely on race and national origin discrimination in violation of the Constitution’s Fourteenth Amendment’s guarantee of equal protection under the law[1].

The Fifth Amendment Due Process Clause is also at stake in this scheme since it requires that the government provide individuals in deportation proceedings with due process. Moreover, deportations cannot possibly occur instantly because immigration laws provide various grounds for relief from removal on humanitarian grounds, such as T-Visas in order to protect trafficking victims, and a provision under the Violence Against Women act that protects domestic violence survivors from further injury and exploitation[2]. Moreover, an immigration judge decides the deportability and alienability of an individual, and the immigrant has the right to their day in court[3]. Still, and despite these protections, in 2013, 83 percent of people deported from the United States were not given a hearing before a judge. So, although mass deportation is unlikely to happen, it is possible that there will be an increase in the numbers of deportations without hearings.

Trump has also pledged to detain all illegal aliens apprehended crossing the border until they are sent home, promising to end catch-and-release. The Fifth Amendment gives individuals the right not to be deprived of their liberty without due process of law. The U.S Supreme Court has established that the Fifth amendment extends protection “to all persons within the United States, including aliens, whether their presence is lawful, unlawful, temporary, or permanent.[4]”  Our immigration laws require “special justifications for detention.  Our Supreme Court has recognized “preventing flight” and “protecting the community” from danger as meeting the special justifications threshold[5].  The United States currently spends $1.84 billion detaining immigrants.  The costs of keeping millions more individuals in detention would result in even higher costs to the U.S. government, not to mention the overcrowding that would ensue in the detention facilities.  This plan would be,  at a minimum, unconstitutional, and at a maximum, just plain fantasy.

Like the other proposals, this one is far-reaching and vague.  The Muslim ban would not only run afoul of International law, but it would violate the Fourteenth and Fifteenth Amendments as well.  At the international law level, Trump would violate the Refugee Convention and the Convention Against Torture by denying entry of refugees fleeing persecution in their home countries.

Moreover, profiling U.S Citizens would violate the First and Fifth Amendments. The Supreme Court has established that religion is a suspect classification akin to race and national origin, and they evaluate laws or policies based on an express religious classification with the most demanding scrutiny. What this means then, is that a law or policy expressly subjecting Muslims to heightened suspicion, surveillance, or special registration because of their religion, as Trump proposes, is presumptively invalid. A policy that applies to an entire category of people based on their beliefs, rather than on their wrongful conduct is likely to fail the narrowly tailored test. There can be no compelling government interest in the surveillance of entire communities on the basis of religion, even if Trump were to claim an interest in protecting national security.  This claim is not based on facts or intelligence, but on pure irrational and unfounded fears.

Trump plans on ending birthright citizenship so that the children of illegal immigrants are not born U.S. citizens. Trump claims that this is the “biggest magnet for illegal immigration” and that “it’s the wrong policy.”  Many countries follow the system of jus soli or more commonly known as, birthright citizenship.  Birthright citizenship, or Jus soli as it is known by its Latin name, which means law of the soil.  Under this concept, citizenship of a person is determined by the place where a person was born. The U.S. follows the jus soli system to determine citizenship.   What this means is that whoever is born in the U.S. and is subject to its jurisdiction is automatically granted U.S. citizenship – this concept is codified in our Constitution’s Fourteenth Amendment[6], which reads that “[a]ll persons born or naturalized in the United States, and subject to the jurisdiction thereof, are citizens of the United States and of the state wherein they reside.” The only way to get past this, is by Amending the Fourteenth Amendment. A reasonable, albeit colloquial response to that prospect might be: “good luck with that!”