The Dissolution of Peru’s National Congress 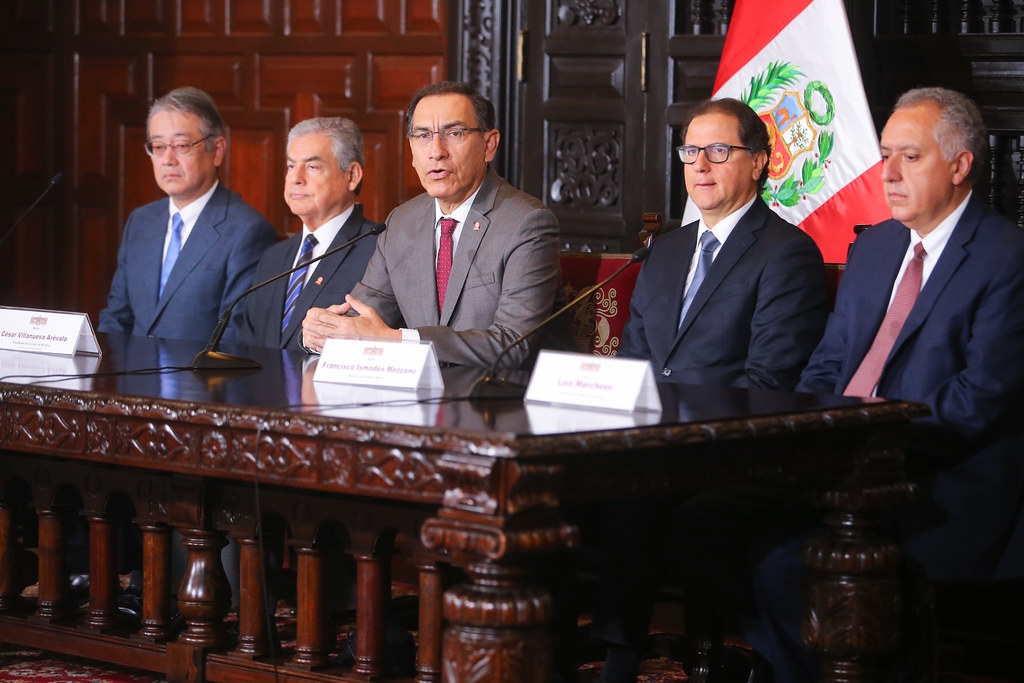 On Monday, September 30th, 2019, the Peruvian president Martín Vizcarra announced the dissolution of Peru’s national congress after lawmakers opposed anti-corruption reforms that Vizcarra proposed. Martín Vizcarra initially ran for Vice President of Peru alongside President Pedro Pablo Kuczynski in 2016. Kuczynski resigned two years later due to an investigation of corruption involving Odebrecht, a Brazilian construction company, and the leak of “Kenjivideos.” Kenjivideos showed collusion between the legislative and executive branches, causing Vizcarra to step up as President of Peru in March of 2018. In response to Vizcarra’s action, the Peruvian congress has taken a vote to suspend President Vizcarra for a year (BBC World). So what amounted to these extreme actions, and what happens when two significant branches of power conflict?

The two actions proposed by the Peruvian President and Congress this past week question the authority and power within the government of Peru, but how did all this start? After the resignation of Kuczynski, President Vizcarra promised that fighting political corruption would be a priority under his administration. According to BBC,  Vizcarra said that “... he would fight graft head-on, which endeared him to Peruvians, tired of endless corruption scandals that have tainted not only Mr. Kuczynski but also the three previous Peruvian presidents” (BBC World 2019). Since Kuczynski’s resignation, Vizcarra has attempted to pass anti-corruption reforms but with limited success due to the domination of Congress by the Popular Force, a right-wing party led by Keiko Fujimori. Keiko Fujimori is the daughter of former President Alberto Fujimori - currently in jail for “allegedly accepting illegal funds from Odebrecht,” - while Keiko Fujimori is now in custody for money laundering (Fowks). According to BBC World, “Mr. Vizcarra accused her [Keiko Fujimori] party of trying to shield itself from corruption investigations by obstructing his reforms (BBC World 2019). Without the support of his anti-corruption reforms, Vizcarra threatened to dissolve Congress, but it wasn’t until Monday that he did so. Earlier on Monday, Vizcarra had asked for a vote of confidence from Congress to change the structure in appointing judges to the Constitutional Court. According to the New York Times, “Lawmakers gave him the vote of confidence, but also went ahead and picked a constitutional judge of their choosing: the cousin of the head of Congress” (Kurmanaev, 2019). This last action by Peru's Congress resulted in Vizcarra’s motion to dissolve the institution.

According to the Washington Post, the president of the Peruvian Congress, Pedro Olachea, told reporters that: “Vizcarra had to dissolve Congress with this appearance of legality because otherwise, he was facing impeachment” (Tegel 2019). The Congress quickly voted to suspend Vizcarra and swore in Vice-President Mercedes Aráoz as acting President (BBC World). The Congress had previously made plans to elect new judges for the Peruvian Constitutional Court, which could have furthered the hyperpolarization of Peru’s government and further limited President Vizcarra’s executive power. According to the Washington Post, many of the candidates for the Constitutional Court had been accused of corruption scandals or criminal accusations (Tegel, 2019). Others had questioned the legitimacy of Congress’s move to swear in a new president due to the Congress already being dissolved before the vote had happened. Those supporting Vizcarra and his substantial action include the Peruvian police and the military, the Organization of American States, and the majority of the Peruvian people. “Recent polls have shown that more than 70 percent of Peruvians, weary of partisan bickering and endless scandal, favored the president shutting Congress down” (Tegel, 2019). The disorder taking place comes two years before the next election, in which the President, Vice President, and National Congress will all have new elections. In a clash for power, it could cause elections to come sooner, replacements to be appointed, or even for Vizcarra to govern temporarily without a Congress for a brief amount of time. Mr. Vizcarra has stated that new elections will be held on January 26, 2020 (BBC World 2019). These elections would allow the people to decide the state of Peru’s Congress.

In the heat of this situation, both President Vizcarra and Vice President Aráoz have claimed authority as the leader of Peru. Some congressmen have protested the dissolution by refusing to accept the action, claiming Vizcarra is abusing his executive power and labeling him as a dictator (BBC World 2019). The constitutionality of this action will most likely be investigated by the Court and potentially by the International Court of Justice. Since the announcement, pro-Vizcarra protestors have surrounded Congress, and riot-police have been sent to the area to control the tension. After Congress swore in Vice President Mercedes Aráoz as an interim President, Ms. Aráoz has taken to Twitter to air her grievances. Ms. Aráoz stated on Tuesday, Oct. 1, 2019, “He decidido renunciar irrevocablemente al cargo de Vicepresidenta Constitucional de la República...Espero que mi renuncia conduzca a la convocatoria de elecciones generales en el más breve plazo por el bien del país” (@MecheAF). I have decided to renounce the position of Vice President of the Republic irrevocably… I hope that my resignation drives the announcement of general elections in the shortest term for the good of the country. Reuters reported that Aráoz has since rejected the appointment as President by the Congress, but retweeted a user later that questioned the constitutionality of Vizcarra’s act. Some have justified Vizcarra's action due to the complete corruption of so many members of Congress.

The commotion in Peru’s current government has stemmed from long patterns of corruption. A familiar name in the recurring corruption scandals is Grupo Obredecht, the Brazilian construction company. Obredecht has played a large part in establishing infrastructure, including metros and ports throughout Latin America, but has also had a role in bribing politicians in exchange for Obredecht contracts. According to BBC World, “In 2016, the Brazilian-based group signed what has been described as the world’s largest leniency deal with US and Swiss authorities, in which it confessed to corruption and paid $2.6bn in fines” (Gallas, 2019). Obredecht has been accused of bribing politicians throughout Latin America, including those in Ecuador, Colombia, Venezuela, Peru, and Brazil. The continuous corruption by the elite construction company calls attention to the commonality of the rich, companies, and people, using their money as an influence in the government. Although Vizcarra dissolved congress so that he can further his agenda in promoting anti-corruption reforms, many are unhappy with the unconstitutionality of his actions.

It was 27 years earlier, that former Peruvian President Alberto Fujimori exerted his executive power unconstitutionally and dissolved, not only the Congress but also the judiciary branch of Peru.  Fujimori’s government was labeled as a coup after he assumed the legislative and judicial powers and allowed troops to be stationed at the government institutions in 1992. Fujimori took this action as a reaction, similar to Vizcarra, since he had trouble with the American Popular Revolutionary Alliance and the Democratic Front, the two parties that controlled Peru’s Congress at the time. According to the New York Times, Fujimori dissolved these institutions in the name of democracy (Associated Press 1992). Fujimori used the support of the military to help maintain order and regulation. So what makes Vizcarra’s situation different?

Both presidents used democracy as a justification to dissolve democratic institutions that have been proven vital to a representative government. Vizcarra has the potential to follow Fujimori’s footsteps, but the Constitutional Court could also block Vizcarra’s dissolvement, reinstating Congress, and returning Peru’s governmental institutions to order. The governments of Vizcarra and Fujimori both suffer and suffered from heightened polarization of the political institutions which prevents parties from working together. To rectify the circumstances, both parties must compromise to avoid another coup. However, with historical context, is it just to reinstate Peru’s Congress when there has been so much support behind Vizcarra’s action by the Peruvian people? Even though it is unconstitutional for Vizcarra to remove the current congressmen, is it right to make Peruvians wait two more years before they can vote these congressmen out? In this circumstance, it is imperative to remember that even though unconstitutional actions may have beneficial purposes, the justification of these actions could later support unconstitutional acts in the future, that may not have moral intentions.