The Death of Berta Cáceres 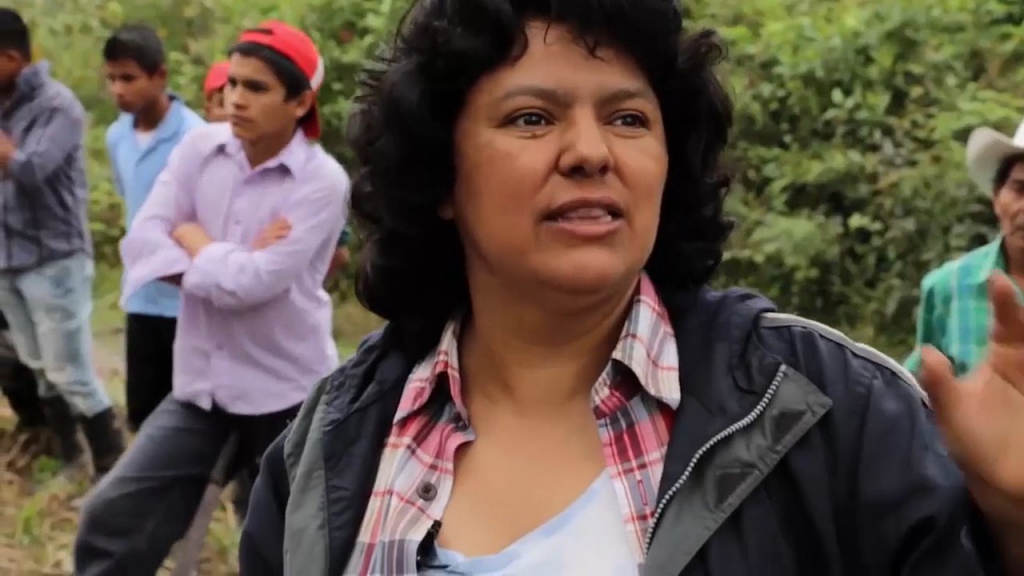 Activism has formed as a response to fight for social or political change. Activism can be in the form of local politics, demonstrations or protests, or even campaigning and supporting outside candidates. Activism and activists are crucial to democracy. They challenge the status quo and generally promote social justice and the protection of human rights. However, being an activist, particularly a vocal one, can be dangerous, especially in a region where corruption at the highest level can easily silence you. Money and power in influential companies that seek to extract natural resources can cause these companies to target environmental activists who aim to protect the earth and its resources from predatory actions like fracking. Environmental activism in Latin America is generally tied closely to indigenous activism, as indigenous populations tend to be located in more rural areas that are more often targeted by governments and companies for resources.  According to the Latin America Working Group, “From 2010 to 2015, there were 572 environmental activists killed in Latin America” (Harlow).

On March 3rd of 2016, an active environmentalist, Berta Cáceres, was murdered in her home in La Esperanza, Honduras. Berta Cáceres was the recipient of the 2015 Goldman Environmental Prize and was an active proponent of grassroots activism. She was the co-founder of the Civic Council of Popular and Indigenous Organizations of Honduras which focused on fighting for the protection of indigenous rights, especially in regards to illegal logging and mining. She was a mother of four. During the time before her death, Berta Cáceres had organized and led demonstrations against the Agua Zarca hydro-dam project and mining companies. According to the Guardian, “The Agua Zarca dam was among scores of environmentally destructive mega-projects sanctioned after the 2009 coup, which ushered in a pro-business government that unleashed a wave of repression against communities who opposed the plans” (Lakhani 2019). In 2013, Cáceres went into hiding after three of her acquaintances had been murdered for opposing the Agua Zarca Dam (Blitzer 2016). She was a protector of indigenous rights and believed the hydro-dam would have caused severe damage and flooding to land of the Lenca people, an indigenous group that she was a part of (BBC World 2019). The dam would have also “cut off the supply of water, food and medicine for hundreds of these people” (BBC World 2019). Cáceres had succeeded in protesting the dam that was to be built on the Gualcarque River, causing the construction company to stop the project. It is this passion to protect the Gualcarque River in her country that cause higher officials and companies to target her as a threat, and ultimately led to her assassination. Her death received international condemnation and pressure for justice. “In November 2018, the court ruled the murder was ordered by executives of the Agua Zarca dam company, Desarrolos Energeticos SA (DESA), because of delays and financial losses linked to protests led by Cáceres” (Lakhani 2019).

Previous to her death, Berta stated, “I cannot freely walk on my territory or swim in the sacred river and I am separated from my children because of the threats. I cannot live in peace, I am always thinking about being killed or kidnapped. But I refuse to go into exile. I am a human rights fighter and I will not give up this fight” (Harlow). Before the time of her death, Cáceres had been receiving threats from police, politicians, and construction companies. Her family has been very vocal in her death, stating she was murdered for economic reasons and reaching out to international investigators to investigate her death.

This past week, seven men were found guilty in the death of Berta Cáceres and have received their sentences. The seven men that took part in her assassination included four hitmen, 2 men that were connected to the company in charge of construction of the dam Cáceres was fighting against, and a former Honduran army major. Two of these men were trained by U.S. military forces. The four hitmen were individually sentenced to 34 years. “They were also sentenced to another 16 years and four months for the attemped murder of Mexican environmentalist Gustavo Castro, who was with Ms. Cáceres at the time  of the attack but survived” (BBC World 2019). The four hitmen include Elvin Rapalo, Edilson Duarte Meza, Óscar Torres and Henry Javier Hernández (Lakhani 2019). The two men, Sergio Ramón Rodriguez and Douglas Geovanny Bustillo, connected to DESA, the dam building company, as well as the army major, Mariano Díaz Chávez, also each received 30 years and six months for the organization of her death. Each recipient has 20 days to appeal the sentence. Díaz Chávez had also been under investigation in 2016 for drug trafficking and kidnapping. According to BBC, the executive president of DESA, Roberto Castillo, was alleged to have been involved with the organization of Cáceres murder, but was indicted in March of 2019. He has been accused of coordinating and providing funds to the hitmen. According to the Guardian, “At least 124 campaigners opposing mines, dams, logging and tourist resorts have been murdered since 2010, making Honduras the most deadly country in the world for environmental and land activists” (Lakhani 2017). Cáceres is just one of the many victims in Latin America that has died fighting to protect others.

Cáceres’s family has responded to the sentences, glad that men are being punished, but that they will continue to seek full justice for their mother’s death. According to her daughter Bertha Zúñiga, “From the outset, the path to justice has been painful, as our rights as victims have not been respected. These sentences are a start in breaking the impunity, but we’re going to make every effort to ensure that all those responsible – the company executives and state officials identified in the trial – are prosecuted” (Lackhani 2019). Impunity is common in Honduras and in the rest of Latin America, “Ninety-eight percent of violent crimes in Honduras go unsolved” (Blitzer 2016). Corrupted elites are often capable of avoiding punishment or jail time due to an ongoing system of corruption.

Activists in Latin America, along with other investigative professions including journalists, face a dangerous life. Those seeking to find information including that of disappearances, deaths, and other discrepancies are often threatened and live in a state of uncertainty. According to the Latin American Work Group, “In its 2016 Annual Report, Frontline Defenders revealed that 87 human rights defenders were killed or died in detention in Latin America, representing more than half of the total 156 deaths documented in 25 countries” (Harlow).  Looking forward, we can only hope that the prosecutions of those involved in Berta Cáceres’s death will set a precedent for future misconduct against activists and will disway violence against activists in Latin America.