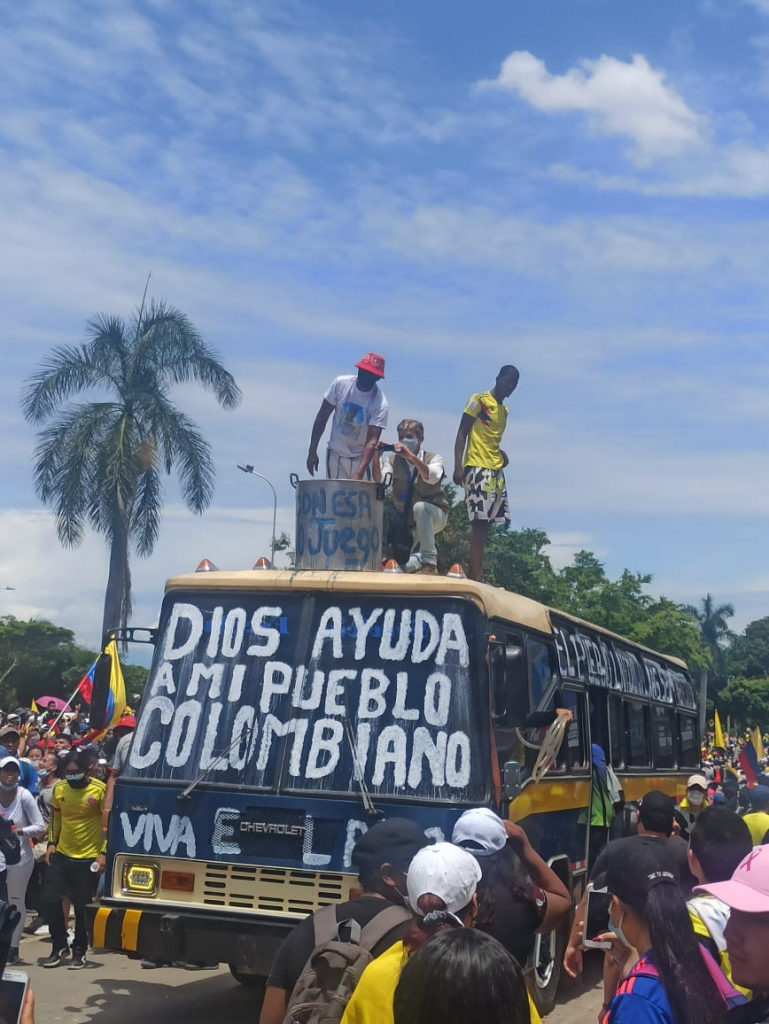 The following is a report I have written regarding the critical situation in my home country of Colombia. I want to appeal to your humanity and ask you to share this information, as we need to report it in as many languages as we can to bring attention and stop the slaughter.

The economic and political tension in my beloved country started long before current Colombian President Ivan Duque took office in 2018, but things have escalated quickly under his leadership. 10 million voters supported Duque’s proposals – which included shutting down the Peace Agreement in 2016, while another 8 million people voted for the opposition. Just one year later, the governments work and retirement funds reforms motivated the first protests on Nov 21. “21N”, as people remember it, brought almost 2-million people to march in the capital city of Bogota, and hundreds of thousands more showed support from different cities across Colombia and around the world. People took to the streets the next day and citizens turned to social media in protest of two people who were killed in clashes with the police. On Nov 22, in the middle of a pacific manifestation, participants witnessed the moment when an antiriot officer shot a tear gas cap into the face of 18-year-old killing him on the spot.

Days later, on Nov 26, the right-wing party decided to remove one of the most polemic bills on work laws: Article 44 of the National Budget (education funding), and the taxing bill “Law on economic growth”. Much to the dismay of Colombians everywhere, anti-government rallies continued throughout Dec and Jan until the government started negotiating with indigenous groups and representatives of Unions. Despite the discontent, all massive gatherings stopped abruptly when COVID 19 reached Colombian territory at the beginning of March 2020.

Present day, the economic situation has worsened living conditions for the vast population in Colombia. According to the Colombian newspaper El Tiempo, the health crisis impacted the overall unemployment rate, which reached a disconcerting 21,4% of the population (approx. 5 million people), with the GDP growing to a modest 1.4%. While it is true that the Duque government re-directed about 38 billion pesos (10 Million US dollars) and passed emergency bills to protect families from eviction, Colombian media criticized the president’s investment in tanks, ammunitions and vehicles for the antiriot squad, which was worth 31 billion pesos (approx. 8 million US dollars).

Social tension rose again in April, when the government announced a tax reform and, in national news, the oblivious Minister of finance, Alberto Carrasquilla said that a carton of eggs was 1800 pesos (approx. 47 US cents), when it is actually costs about three times more than that. Immediately, newspapers and members of the opposition called Carrasquilla out, noting his inattentiveness on the prices of basic food products, and questioned the way the reform would affect the middle class. Both unions and opposition members requested to withdraw the reform that included “charging income tax to people who earn a monthly salary of more than US $ 663, in a country where the minimum wage is US $ 234.” (BBC news)

Despite facing the third peak of COVID 19, the people of Colombia took to the streets again in cities all over the country on April 28th, as a result. In an interview with La W radio, Doctor Carolina Corcho expressed the reasons behind the protests are justified, and that the medical community shares the outrage of the people. She also said the government’s measures to control the spread and provide vaccines have fallen short of necessary expectations. She explained the country was already facing the third peak before protests, and to “withdrawal the reform to avoid protests is the best thing to do”. In Cali, indigenous groups demolished the statue of the Spanish founder Sebastian de Belalcazar, and demonstrations turned violent when the anti-riot police squad intervened. At the end of the day, two teenagers – including a sisteen-year-old –were killed by police. Recently, the situation has come to a fever pitch, as thousands continue protesting the unscrupulous policies and inept actions of the government, which includes the murder of innocent protestors at the hands of militarized police forces, which has eclipsed 22 dead and more than 800 suffering severe injuries since the protests began. Social media is now flooded with videos of brutality from police officers, with some disturbing images showing the police shooting at protesters. Militarization of major cities and a possible declaration of state of siege concerns Human Right organizations who are already gathering information and testimonies.

Even though the Duque government finally announced the withdrawal of the tax reform – and Finance Minister Carrasquilla’s resignation – riots continue against the following work, health and retirement funding reforms, plus the brutal repression of the police and the government’s mismanagement of the pandemic. While UN has sent representatives to different parts of the country, it is expected that international press will help call attention to this most critical moment that Colombia is facing.