In early September, China announced that it is planning to loan a mere USD$5 billion to Venezuela in hopes of aiding their plummeting economy. The Economistreported that Nicolás Maduro, the President of Venezuela, made a trip to China to seal the deal. Since China has already thrown away over USD $56.3 billion to the Latin American country over the past nine years, another $5 billion seems like nothing (“Why China…”, 2015). When considering China’s total GDP is USD $10.36 trillion, it has only loaned out about 0.5 percent of their GDP. But China has increased their investment in Latin America by 71 percent within the last year. Also, China’s president Xi Jinping is planning to double their trade volume with Central and South American regions over the next decade to USD $250 billion. China has pulled ahead of the US in terms of trading with a number of Latin American countries, particularly with Venezuela (“China’s Big…”, 2015).

Even though it may not make sense why China has invested so much money into Venezuela specifically, it has its reasons. Venezuela is one of the largest oil producers in the world and China, being one of the largest economies in the world in terms of GDP (in US dollars), has money. Since they each have something that the other one wants, they make for good allies. Venezuela is in desperate need for cash—especially short-term cash—for “salaries, social security, and imports” (“Why China…”, 2015). On the other hand, “China’s energy demand will increase with the increasing rural-urban migration in the coming years” (“China Spoils…”, 2015). Therefore, China is trying to keep more of the imported oil resources in their emergency supply.

China is hoping that its investments will eventually lead to more infrastructure and increased production of oil. Currently, Venezuela ships about 700,000 barrels of oil per day to China, but Maduro is hoping to increase that number to 1 million barrels a day to repay the USD $20 billion of outstanding debt more quickly (Miroff, 2015; “Why China…”, 2015). It would prove advantageous to Venezuela if the oil prices were correspondingly increasing, but unfortunately that is not the case. It is, in fact, the opposite. In 2012, oil was sold at an average of USD $103 per barrel. In early 2014, the oil price remained strong at about USD $100. However over time, “the country was spending as if the price was USD $194, running up a fiscal deficit of 17.5 percent of GDP” (Hausmann, 2015).

When Maduro entered office in 2013, he promised Venezuelans that he would do his best to try to convince the other oil-abundant countries to limit their oil production in an effort to increase international oil prices to USD $110. Since he has actually retrogressed in achieving his goals, his popularity has been decreasing. People are losing faith in him. The citizens are unaware of what is happening to their country because the government is not providing information on their expenditures. “There are railways that were announced but abandoned, plants that never went far beyond the ribbon-cutting ceremony” (Hausmann, 2015). Such mysteries seem to be caused by government corruption. “In 2013, eight people in Venezuela were arrested for appropriating USD $84 million from the Joint Chinese-Venezuela Fund” (Hausmann, 2015), which comprises of 0.15 percent of the total funds. While that is a very small percentage, such incidences will add up.

The question becomes: How can Venezuela get back on their feet? China’s efforts in foreign aid are useful, but the Venezuelan government is not utilizing the money to the best of their ability. If Maduro wants to stay in office, he must make the push to end corruption and allocate funds appropriately. If more long-term projects were implemented, then the economy could possibly start moving in the right direction.  Venezuela needs to limit reliance on countries such as China to finance their economy. 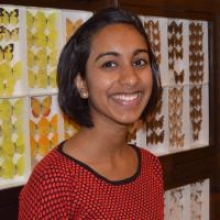 Tina Thomas
Tina Thomas is a senior at the University of Pittsburgh majoring in Actuarial Mathematics and Economics. This article was written as part of the course “Latin American Economic Development,” a writing seminar offered by Professor Marla Ripoll at the Department of Economics.