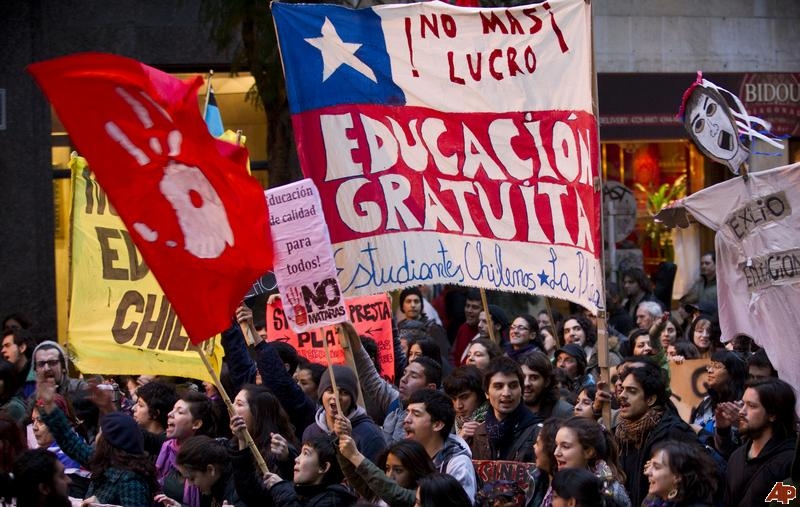 Chilean President Michelle Bachelet anticipated protests this past Wednesday, May 21st, when she gave her first annual address to Congress in Valparaiso. Tens of thousands of college and high school students have been demonstrating for change of Chile’s market-based education system since 2011, demanding the end of “educational segregation” that separates poor students from rich students in terms of equal opportunities in education.6 Police expelled tear gas and fired water cannons on 2,500 student demonstrators last Wednesday, arresting 33 individuals for disorderly conduct.3 Meanwhile in Santiago, high school and college students organized street blockades and an overnight sit-in protest at a school in the capital city.6

During the address, Bachelet presented her proposed bill to Chilean lawmakers pledging to change the fundamentals of the historically “market-ized” education system, making a quality education a right instead of an exclusive, purchased commodity.2 The bill is focused on primary and secondary education and was submitted to Parliament on May 19th.1 Bachelet’s proposal seeks to expand education opportunities by making all primary and secondary schools free. Due to the market structure imposed in the 80s during the Pinochet era, the Chilean education system is socioeconomically segregated, favoring private, for-profit schools with nearly 52% of enrolled students attend them.3 Eighty percent of these schools operate on “shared funding,” meaning they receive government funding (in equal terms with their public, non-profit counterparts) and are also supplemented by parent contributions.1 The socioeconomic bias in the educational system is intensified by both the buy-in arrangement and Chile’s extremely high rate of inequality, scoring a GINI index of 52.1, the highest among the 34 OECD member countries.1 The bill plans to cut all public funding to private for-profit schools by 2017 unless they achieve non-profit status. Bachelet promises to replace parent copayments to these schools with increased subsidies and government funding.2

The bill also bans selective admission for primary schools that receive state funding; these admission policies have been traditionally discriminatory against low-income families and low-academic level students.1 In addition, the president included plans to increase kindergarten funding, create new public universities and establish an accountability mechanism for schools. The government promises to publish public school rankings based on student performance, allowing parents to be both better informed and have a wider selection of schools to choose from. She also assures the government will create nationwide teaching standards and sanction schools that underperform.1

Although the majority of the student protesters agree the bill is a step in the right direction, they are not pleased. Many claim the bill is not fully satisfying their demand for free and equal education, needs to be more transparent in its course of action, and leaves the intense debate of university education to be dealt with later in the year.6 During her campaigns, Michelle Bachelet promised to make all education free by 2020.1 All Chilean universities are supposed to be non-profit, but there is evidence that some owners are making returns on profits, validated by international powerhouses such as Apollo Global Management, who has purchased Chilean universities in the past.1 The bill is almost entirely addressing primary and secondary education, but leaves the issue of low-quality, low-employability college degrees to continue to foster protest among student groups.

The international community expected continued demonstrations by Chilean students, but a new group has joined the protest. The Chilean president plans to finance this supposed USD $2 billion educational reform through a tax hike.2 She proposes to increase business taxes from 20% to 25% in the next two years. Such an increase would increase government revenue by $8.2 billion annually, nearly 3% of the country’s GDP.5 Since Congress approved this measure last week, business leaders and the right have been threatening protest. Chilean big business has been profiting from a program called FUT, which granted them tax exemption if they reinvested their profits. The education reform bill erases this program. Business leaders and the right are furious about this measure and warn it will hurt job creation and stifle the economic growth Chile has been experiencing.4 The President and other supporters of the bill claim the reforms will promote long-term growth in all sectors while working to solve an unavoidable issue; Chile’s education system is lacking in both quality and equality.

Bachelet was well aware that the student protesters would be determined and difficult to please before she even entered office.  The education reform bill she has announced is revolutionary; it completely uproots the system’s basic structure with hopes to change the beneficiaries of education from an affluent minority to the deserving majority. However, the proposed plan to finance the bill has created another influential dissenting group, the conservative business sector.  Will the combined pressure overtake the bill’s momentum and send Bachelet back to the drawing board in terms of fundamental structural adjustments and their financing?