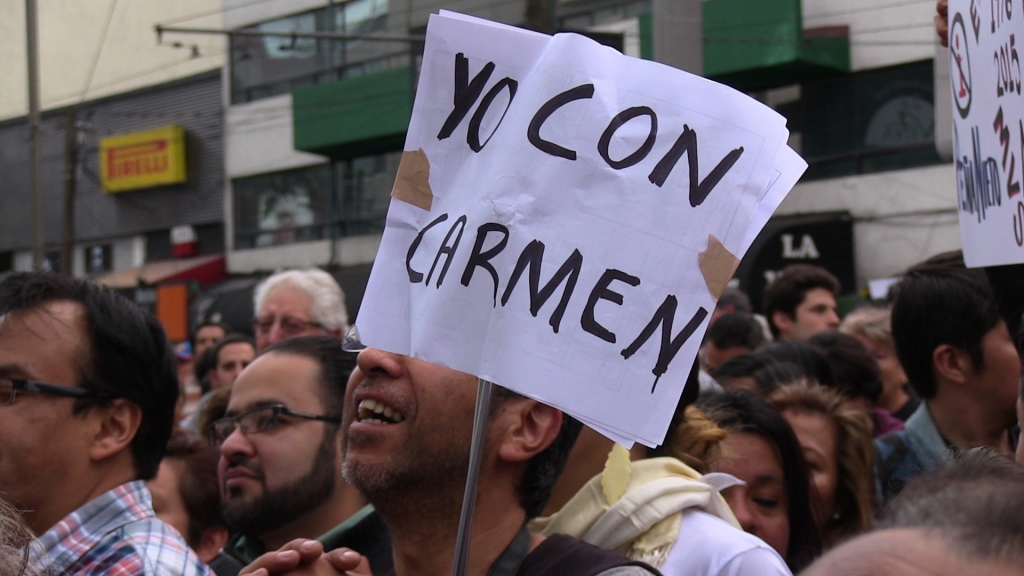 Earlier this month, journalist and “Primera Emisión” news anchor Carmen Aristegui was let go from her position at Noticias MVS after exposing alleged Mexican government corruption. Aristegui, named the second most powerful woman in Mexico last year, is the central figure in this scandal, begging questions of silencing opposition in the Mexican media.1 She is known for respectable yet dangerous journalism marked by a 25 year stock of accolades; she is known to have quite the ego to match her career. Several other associate reporters were also let go after using their company’s name as a partner in the launching site “MexicoLeaks” without the authorization of their superiors. MVS has run ads surely distancing itself from MexicoLeaks and its claims since the spat was made public.2

Aristegui and her team published an exposé linking the purchase of a multi-million dollar “Casa Blanca” or White House, by the president and his wife to a billion dollar infrastructure project.3 The president has said he acted properly and legally.4 Two of Aristegui’s reporters were fired following its release. Aristegui spoke to their terminations in a broadcast, "Instead of firing them, they should be given prizes. This seriously damages our journalistic work. This is a battle for our right to express ourselves. For our right to inform."2 When she demanded they be reinstated, MVS refocused to terminate her, replacing her with another anchor by the following Monday.1 In a statement, Noticias MVS explained their regret in her termination, adding the decision was made because she “compromised the name of the business” in her relations with MexicoLeaks.3

This isn’t her first confrontation with corporate leadership, either. Some recent exposures, including uncovering a politician-led prostitution ring, have stirred conflict. Hundreds of Primera Emisión fans and supporters protested outside MVS studios in Mexico City, calling her dismissal an “unjustified attack on freedom of expression.”1 Liberal intellectuals and political analysts have joined Arestegui’s fellow journalists in critiquing the firing, calling her departure a “serious injury to freedom of expression” and “loss of democracy” in Mexico.1 Online petitions on change.org have gained momentum with over 180,000 signatures offering support for recent exposures conflicting top Mexican government interests.1 Twitter hashtag #endefensadearistegui has taken off; Mexicans as well as the international community has begun to question the “cozy ties” between Mexican media and government.5

Mexican government officials have released statements deeming the situation a “disagreement” between the journalist and her employer. "It is desirable for this conflict between individuals to be resolved, so the communications company and the reporter can continue to offer content that is valuable for Mexican society. The federal government has respected and permanently valued the professional and critical work of journalists, and will continue to do so."1However, following the spat, MVS released a new set of guidelines to guarantee pre-approval of news stories, centralization of journalistic investigations and dismissal of correspondents outside Mexico, qualities that have historically stimulated dissent voices against the Mexican government.2

“MexicoLeaks” has formed as an alliance of eight Mexican media outlets and civil society groups with the mission of a “transparent Mexico.”6 Aristegui has signed on as a founder for the site. They hope to use a new digital platform to expose human rights abuses, corruption and other misuses of institutional and economic power.6 The project urges its contributors to secure their anonymity, using untraceable computers and exercising discreet public comment. Aristegui’s release has demonstrated both the urgency and danger in this type of journalism.

Mexico has become one of the most dangerous places in the world for journalists. Attacks on journalists in Mexico have surged during President Enrique Peña Nieto’s first two years in power: assaults reported every 26.7 hours, 10 murders and 4 disappearances since December 2012, 84 murders since 2000.7 Of the 326 attacks last year, 43% were of physical aggression, 16% of intimidation, 14% arbitrary detentions and 13% verbal threats. Organized crime is to blame for only a small percentage of the violence; public-associated officials, on the other hand, were found accountable for about 40% in a recent study.6

Sara Rafsky, America’s research associate for the Committee to Protect Journalists in New York, has said the attacks and killings of journalists in Mexico show press freedoms are in a "dire" state in the country.1 Carmen Aristegui’s story has stamped a famous face on the repetitive headlines. Will MexicoLeaks break the trend or fall victim to the recent media oppression? According to Aristegui’s interview with the Los Angeles Times, she won’t go down without a fight; "I have tried to be true … to my audience. It is the permanent battle of journalism."2

1) Hernandez, Daniel. “Dismissal of News Anchor in Mexico: a Return to the ‘Bad Old Days’ of Media Control? VICE. Available at: https://news.vice.com/article/dismissal-of-news-anchor-in-mexico-a-return-to-bad-old-days-of-media-control

2) Wilkinson, Tracy. “In Mexico, a hard-hitting journalist is getting her wings clipped, again.” LA Times. Available at: http://www.latimes.com/world/mexico-americas/la-fg-mexico-reporter-20150314-story.html