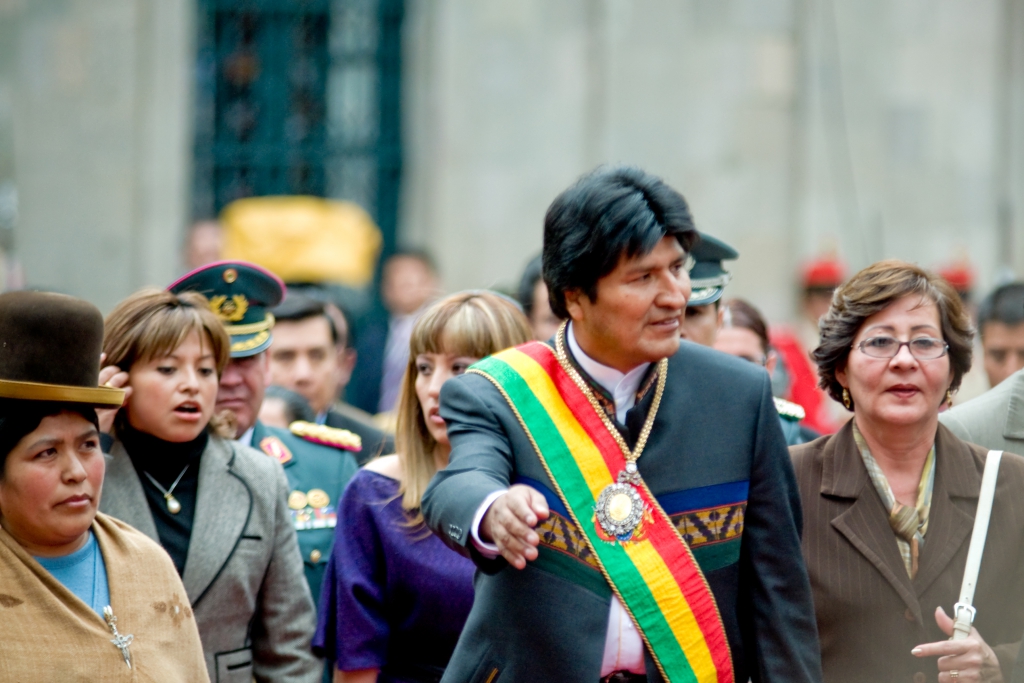 On October 20th, 2019, Bolivia will engage in a national election to nominate a new Bolivian president for the next five years. In order to win, the victor must win by a majority of 50% or a 40% threshold with a 10 point margin over their closest competitor. If a candidate does not reach these requirements, a second round will be held in December solely between the top two victors of the first round. Engaged in the 2019 Bolivian election are nine candidates including Juan Evo Morales Ayma with the Movement for Socialism party, Carlos Mesa with the Civic Community party, Óscar Ortiz Antelo with the Democratic Social Movement, Victor Hugo Cárdenas with the Solidarity Civic Unity, Jaime Paz Zamora with the Christian Democratic Party, Virginio Lema with the Revolutionary Nationalist Movement, Oscar Ortiz with Bolivia Alliance Says No, Israel Rodriquez with the Front for Victory, Ruth Nina with the National Action Party of Bolivia, and Felix Patzi with the Third System Movement.

The current President of Bolivia, Juan Evo Morales Ayma, more commonly known as Evo Morales, has been acting President of Bolivia since 2006. He is seeking to run for his fourth presidential term. Morales has been celebrated as the first indigenous president of Bolivia and has fought for indigenous rights and protections in a country where the indigenous population is the majority, but has long been underrepresented in the government. As a socialist, Morales has implemented leftist policies during his time in office, including the renationalization of Bolivia’s oil and gas industries and the investment in social programs and public works projects (BBC World). He also worked to reframe the constitution and the Bolivian national identity in 2009. “It [the constitution] came into force in February 2009 setting out the rights of the indigenous majority, granting more regional and local autonomy to them, and redefining Bolivia as a ‘multi-ethnic and pluri-cultural’ nation” (BBC World). Morales has also represented indigenous values by writing letters to the United Nations to request more respect for the earth (Latinx Today).

Like any president, he has faced criticism from his own nation and from abroad. Some Bolivians believe Morales is too radical to represent Bolivia, while others believe his policies aid wealthier Bolivians more than others. During his time in office, Morales has been vocal in his disdain for U.S. imperialism and has scaled back Bolivia’s reliance and involvement in the International Monetary Fund and World Bank. Morales was reelected in 2009, 2014, and is now looking for reelection in 2019. In facing criticisms, Morales has received some adverse reactions after he has made various attempts to change the constitution in order to overcome term limits. In the 1967 Bolivian constitution, it stated that presidents can serve a maximum of two terms in office, however not consecutively. “In 2009, Morales drafted and was able to pass a new constitution that allowed him to run for a [consecutive] second five-year term, overruling single term limits under the previous constitution” (Global Americans). After this constitutional change, it was then argued that his first term, that came before the new constitution, should not count, allowing him to run for a third term. According to BBC, “The constitutional court argued that the ban did not apply to Mr. Morales’ initial term because it had taken place before the new constitution came into effect”, thus allowing him to serve three terms.

In 2016, Morales held a referendum that would amend the constitution to allow him to serve another five year term in office and thus run for re-election in 2019. In respect to this referendum, “A 51.3 percent majority voted against Morales’s bid for an unprecedented fourth term” (Toro). However, Morales continues to seek re-election in 2019. According to Global Americans, “Not content with the results of the referendum, he took his claim to court, where the pro-Morales court ruled he could run on the grounds that barring him from doing so would violate his human rights- a decision questioned by a majority of the human rights groups in the hemisphere”. (Noboa) The efforts made to eliminate term limits is one that goes against the grain of democracy, which uses term limits as a method to prevent sustained concentrated power in one individual. On November 28th, 2017, Bolivia’s Plurinational Constitutional Tribunal decided to eliminate these term limits and allow all elected officials to run for office indefinitely. This change and breach of common democratic norms by Morales’s government may be reflected in the ways voters respond in the election this October. As the people have already voted against Morales’s desire to run for a fourth term, they may turn to another candidate who has not been in office as long and abides by previous constitutional rules. This has also given claim to other candidates to question the legitimacy of Morales’s campaign.

Carlos Diego Mesa Gisbert, a candidate in the 2019 election, has also had experience as Bolivian president and is favored to be Morales’ strongest opponent. Carlos Mesa was initially elected vice president in 2002. He worked as vice president under president Gonzalo Sánchez de Lozada, but after Sánchez de Lozada resigned due to social protests in response to the Bolivian Gas War, Mesa took his place. Mesa became president in 2003 and shortly after resigned due to the resurgence of similar gas protests in 2005. Since his resignation, Mesa has been the spokesman for Bolivia at the International Court of Justice in a case against Chile that fights for Bolivia’s right to establish access to the Pacific Ocean. Mesa also has new ideas for Bolivia’s economy, claiming that Bolivia is in a new time, in which it needs to significantly increase foreign investment in order to reduce the national deficit. Mesa has commented on Morales’s running in saying, “President Morales is effectively an illegal candidate because he lost the referendum he himself called, which asked Bolivians if they wanted to allow for indefinite reelection. Bolivians voted no.” (Global Americans).

Oscar Ortiz Antelo is a current Bolivian senator and part of the Democractic Social Movement party. He is located in Santa Cruz, a city of economic importance to Bolivia. He is polling third, following Morales and Mesa, with approximately 5% to 15% of the vote depending on the polling firm. Other candidates following Ortiz include Jaime Paz Zamora, who is the founder of the Revolutionary Left Movement and also served as the president of Bolivia between 1989 and 1993. His campaign is structured on neoliberal policies and returning Bolivia’s government to a federal republic, in which states would have more power. Bolivia is currently a republic with a unitary state. Victor Hugo Cárdenas, aligned with the Civic Unity for Solidarity, is running on an anti-corruption campaign. He also served as vice president 1993-1997 and has also been a profound indigenous activist.

Previous to the election, Bolivian citizens are demonstrating their concerns through social movements and protests. To illustrate, University students staged a peaceful protest against Morales that turned less peaceful and resulted in the vandalization of the Supreme Electoral Court that ruled that Morales is eligible to run for re-election. Not only are citizens concerned with the democracy of their country, but protests have also centered on the current wildfires in the Amazon region in Bolivia and the government’s slow action to help. “Locals are upset by what they see as authorities’ slow response, refusal to officially declare a state of emergency, and reluctance to ask for international aid” (Beaulieu).

The use of social movements and protests are vital to any democracy, as it pressures governments to listen and act on the desires of the people. For citizens to vocalize their concerns with Bolivia's current state and the potential effects of the breach of term limits, Bolivians call on their government to remember their purpose to serve the citizens and to act in a way that represents the values their government has established in the past. Even though Bolivia has seen stable economic growth under Morales and he has aided in indigenous peoples’ protections, the progress the country has seen does not justify the action to prevent power from being passed on. If Bolivia wants to be seen as a legitimate democracy by other states, the government will have to listen to the voices of the people and limit the amount of influence one individual can have in government. In October, the people of Bolivia will have to choose between a familiar stable leader or a new candidate with a new form of leadership.