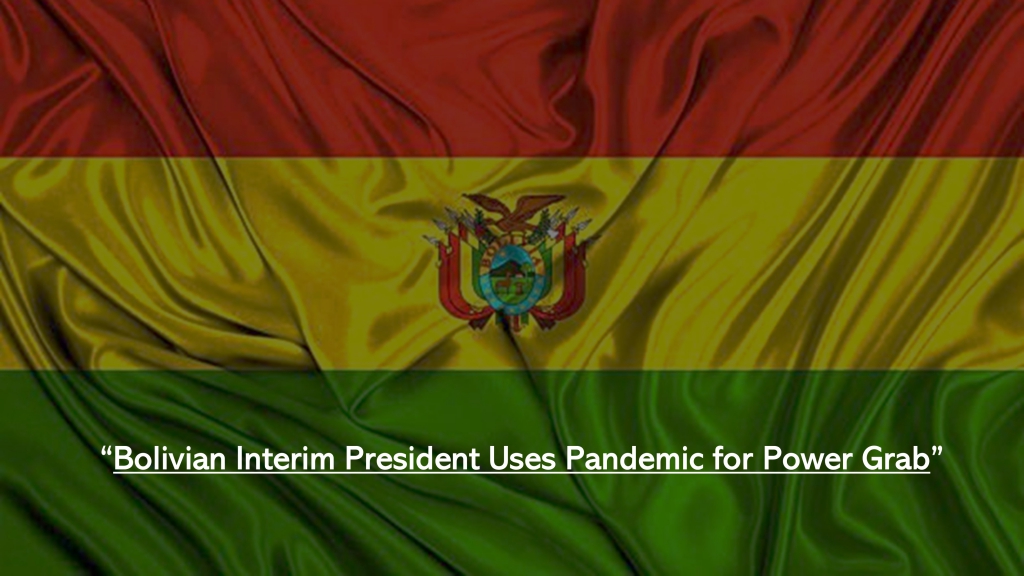 In Bolivia, the spread of COVID-19 has not only pressured the weak health infrastructure of the country but also questioned the stability of the democracy. According to a statement released by the Ministry of Health of the Plurinational State of Bolivia on July 6, 2020, 41,541 people in Bolivia had contracted COVID-19 at that point. Of those who had contracted the disease, 27,617 were active, 12,389 had recovered, and 1,530 had died (Ministerio de Salud, 2020). As an early attempt to limit the spread of the disease, President Jeanine Áñez Chávez introduced preventative measures on March 25, 2020. These regulations included a nationwide 5 pm to 5 am curfew, limited travel based on ID number for essential activities once a week, and the banning of public gatherings.

However, President Áñez, who is currently serving as interim president after former President Evo Morales resigned due to a “soft” military coup, has also taken this opportunity to attempt a timeless power grab. She has suspended the upcoming presidential election in hopes of staying in power. The election was initially intended to be held on May 3, 2020, but Áñez claimed that an election would be dangerous due to the COVID-19 outbreak (Peoples Dispatch, 2020).

When the Plurinational Legislative Assembly (Senate) of Bolivia advocated for legislation that would order an election to be held between May 3rd and August 2nd, Áñez refused to enact the bill. After further pressure from the Parliament and Senate leader Eva Copa, Áñez was forced to either set an election date or the election would be held on August 2nd, as per earlier legislation passed in the Senate that declared it the default election date (Peoples Dispatch, 2020). Consequently, on June 21st, Áñez declared with Congress’ approval that an election would be held on September 6th (AFP, 2020). Serving as an interim president, Áñez main objective was to lead the country into its next election peacefully. However, her actions suggest that she is focused more on consolidating her own power going into the upcoming election.

Furthermore, Áñez is already known for her abuse of power. In light of the COVID-19 pandemic, the government has further reigned in freedom of speech. Áñez passed a decree that those who spread misinformation or disagree with the government’s management of the public health crisis could face criminal charges. Due to this, 67 people have been arrested, and 37 have been jailed, many for vague reasons such as spreading alleged propaganda (Monitor, 2020). It is believed that Áñez is using this decree as a guise to target supporters of Evo Morales and the Movement for Socialism (MAS) political party (Peoples Dispatch, 2020). This would not be her first act targeted toward MAS supporters; she has censored and harassed liberal journalism, brought former MAS officials to trial regarding corruption and terrorism, and utilized police forces in the brutal suppression of protests (Blair and Becerra, 2020).

Áñez’s administration has economically profited from the ongoing pandemic as well. In the eight months that she has been in power, corruption has been rampant; at least 13 high-level cases of coercion, bribery, and other illegal acts have occurred (Ibañez, 2020). In May, the former health minister was fired after purchasing ventilators three times the manufacturer price. These ventilators were later found to be inadequate for medical use in intensive care units (Pasley, 2020).

While the limelight may be focused on the public health crisis, President Áñez’s actions should not be taken lightly. Her contempt toward election regulations, coupled with her administration’s infringement upon freedom of speech, is a cause for concern as Bolivia strives to keep its democratic republic afloat. 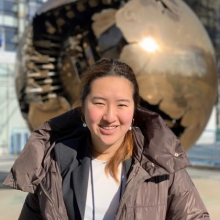 Dorothy Lu
Dorothy Lu is a second-year student at Carnegie Mellon University studying Economics and Statistics with a minor in International Relations and Politics. She is currently researching the impacts of COVID-19 on democratic governments and their leaders.