Berta Cáceres: Profile as an Environmental Activist and Upcoming Trial in Honduras 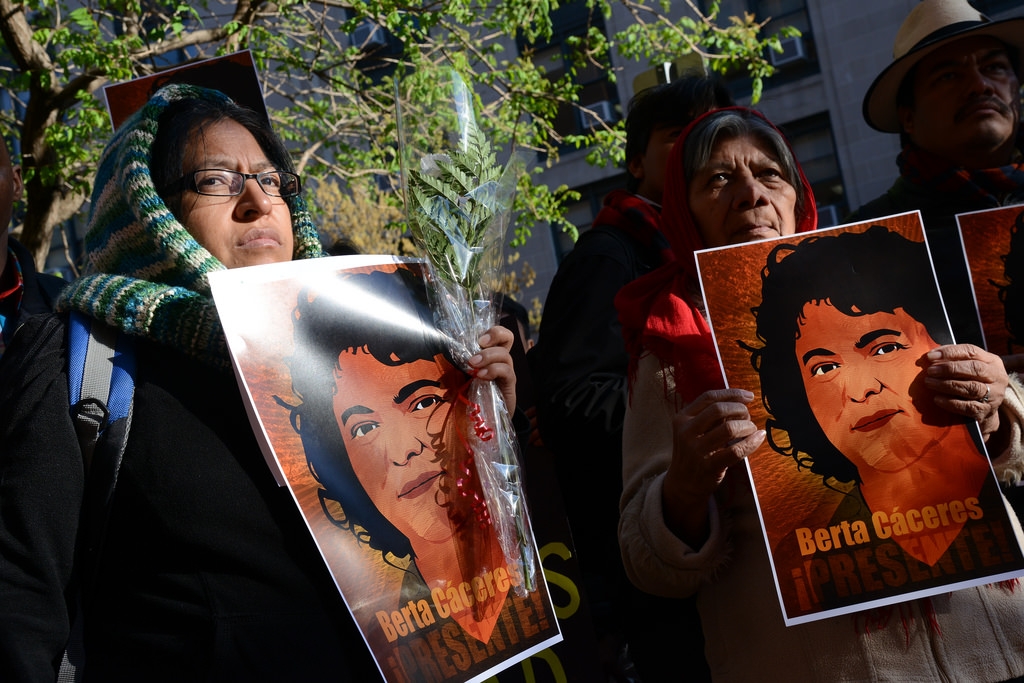 This September, the trial began for the murder of former Council of Popular and Indigenous Organizations in Hondoras (COPHINH) coordinator and 2015 Goldman Environmental Prize winner, Berta Cáceres. On March 2, 2016, Cáceres and Mexican environmentalist Gustavo Castro were attacked in Cáceres’ home by hitmen hired by the executive president of Desarrollos Energéticos SA (DESA). The company leadership targeted Cáceres due to her involvement with indigenous protests against DESA’s plans to build a hydroelectric dam along the Gualcarque river. Although Cáceres died from the shooting, Castro survived by playing dead, making him the sole witness in the highly anticipated trial. Cáceres’ 2016 murder was the most high-profile death in a series of attacks against environmental activists in Honduras since the 2009 coup. So far, 130 environmental activists have been murdered in Honduras, making it the most dangerous country for such activism. The Honduran government’s view on preserving natural resources and indigenous lands has shifted drastically since the military takeover nine years ago. As the government expanded its mining business, it increased its demand for dam projects to supply cheap energy to power the operations. Many of these dams were built on sacred land and disrupted the flow of necessary water routes to indigenous communities. As an activist and member of the Lenca indigenous community, Berta Cáceres dedicated her life to the preservation of human rights and land rights for her people and their natural resources. Her drive to protect disenfranchised indigenous communities against various forms of oppression began at a young age, inspired by her mother who worked as a social activist caring for Salvadorian refugees during her childhood. As a student, Cáceres later cofounded her activist group, the National Council of Popular and Indigenous Organizations of Honduras (COPHINH) in 1993. The goal of COPINH has been to address the legal concerns and threats against the Lenca community, including illegal logging activities and infringements on indigenous territorial rights. Cáceres’ fight to protect Lencan autonomy culminated with a grassroots campaign against the illegal attempt to build the Agua Zarca Dam along the sacred Gualcarque river that began in 2006. Despite support for the indigenous cause by international human rights groups, the corporations funding the dam, including DESA and Sinohydro, and the Honduran government carried on with the construction plans, forging documents that falsely demonstrated unanimous support for the project. In 2013, Cáceres and other indigenous activists responded by setting up a peaceful protest in the form of a constant blockade cutting off access to the dam site. For years, construction on the Agua Zarca Dam was delayed and eventually multiple corporations withdrew financial support for the project. Over the next several years, Cáceres received death threats until she and one of her colleagues at COPINH, Nelson García were murdered in March of 2016. The trial regarding Cáceres’ murder has been marred by controversy thus far. Investigations have revealed that her death involved more than just a single gunman; in fact, it was a planned operation by a group of DESA leaders and ex-Honduran military operatives, including executive David Castillo Mejía. Additionally, the Honduran government has been accused of attempting to cover up the crime and protect those involved. As arrests have been made, protestors have complained about the slow pace of the investigation. Despite attempts by Cáceres’ family to have a full and far-reaching investigation into the threats leading up to Cáceres murder in addition to the attack itself, the courts have not been very willing. So far, the court has denied the family’s requests for expert witness testimony, interviews with DESA board members, and access to other evidence. Earlier this month, Cáceres lawyer presented an application to recuse and replace the judges selected for the case, delaying the trial. According to her lawyer, the exclusion of evidence violated Cáceres’ right to due process. For now, the trial remains suspended until the appeals court decides whether to accept the Cáceres family’s request to remove the current judges. However, Cáceres’ daughters and supporters remain steadfast in their support, not only for justice, but for Berta’s environmental legacy as well.