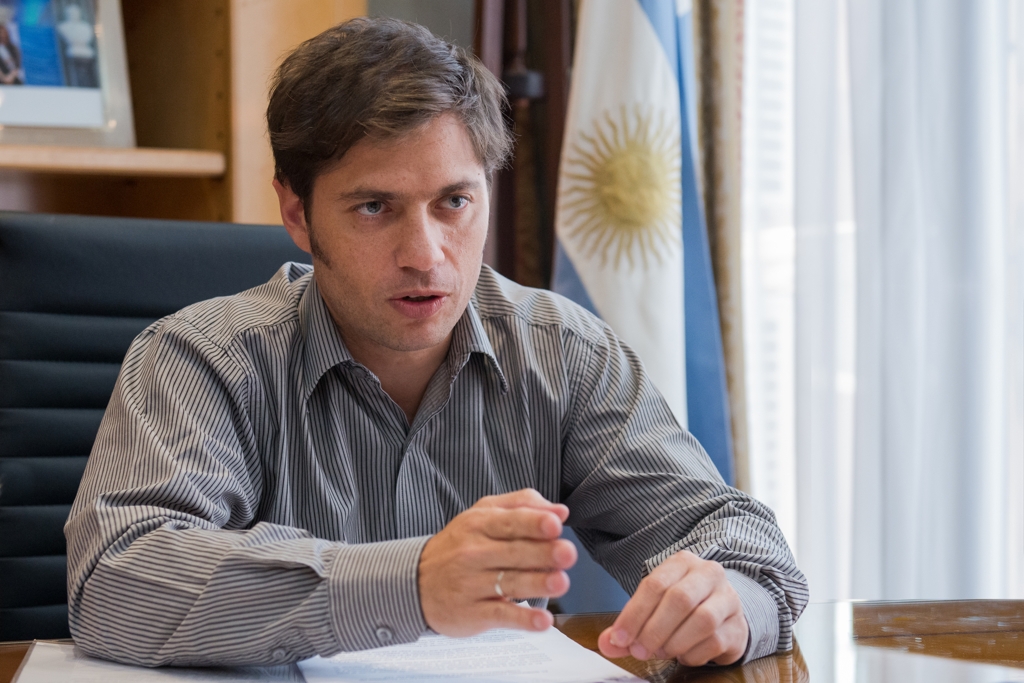 As the deadline of June 30th came and went, Argentina attempted to make $832USD million in payments to restructured hedge funds, but was forced to take the money back by Judge Thomas Griesa who ordered the original debt ruling back in June.1 The New York Courts demanded BNY Mellon give back the $539 million it received from Argentina, deeming the payment in violation of the equal payment clause. Griesa decided that Argentina must make payments to both the restructured hedge funds and the holdouts or service neither. Because neither received debt payments by the original deadline, Argentina is technically in default.  Griesa granted Argentina a 30-day grace period, pushing back the deadline to July 30th. However, Argentina isn’t pleased with the postponement, still accusing the judge of making an “impossible” order.2

Monday’s negotiations included Argentine Economy Minister Axel Kicillof (pictured above), Finance Secretary Pablo Lopez and mediator Daniel Pollack. Kicillof addressed many of his serious concerns for the future of Argentina’s economy, including how the large South American economy will lure back international investment after an agreement is reached.3 He proposed a coupon repayment plan that Griesa quickly blocked. The group of leaders will meet again on Friday to develop a plan that satisfies the court, the holdouts and the Argentine government.

The holdouts have sued for $1.3 billion plus interest, amounting to about $1.5 billion.4 Claims have been filed by NML Capital and Aurelius Management, who have pitched payment plans that would allow Argentina to payback less than the face value of the bonds. They would accept partial payments allowing Argentina to pay with new bonds and other financial instruments. Jay Newman, senior portfolio manager at Elliot Management hinted that these new plans could save Argentina’s foreign reserves, which would be basically depleted if its government paid the debts in full.5 Regardless of these revised policies, the Argentine government has indicated that it will not agree to anything unless the court ordered deadline is indefinitely suspended.4

The Economic Commission for Latin America and the Caribbean has taken Argentina’s side in the dispute, claiming that the court’s decision, like international finance norms, favor the minority while blocking the well-being of the majority.  They claim Argentina’s macroeconomic conditions determine whether the debts will be serviced, and the concern lies there. ECLAC also finds the greatest flaw in the court’s decision to be the equal payment clause. It will inevitably conflict with the Rights Upon Future Offers clause, which prohibits Argentina from improving on the offers they made in 2005 and 2010 to restructured bondholders. As the holdouts begin receiving payment, hedge funds that accepted extremely discounted rates several years ago will want their agreement renegotiated, creating another legal battle.6

The Commission and many Latin American nations alike relate the implausible court mandate to international finance’s exploitative, “vulture” culture. ECLAC Executive Secretary Alicia Bárcena explained that the outcome of this particular case has a larger implications on an international scale; “This a test case for the international community, as numerous governments and international organizations have let it be known, which reveals a legal vacuum that should lead to the reform of international norms that would allow the common good to be protected from a minority's zeal for extraordinary profits.”6

It is unlikely that an agreement will be reached on Friday, but Judge Griesa hopes the mediation continues to catalyze the formation of more possible plans for repayment that could ease the burden on all parties involved. Although historical precedent of international financial settlements is not on their side, the Argentine government is proving relentless in maintaining its unwavering stance to pursue negotiations on its own terms.