Analyzing the Roots of Migration in Central America’s Northern Triangle 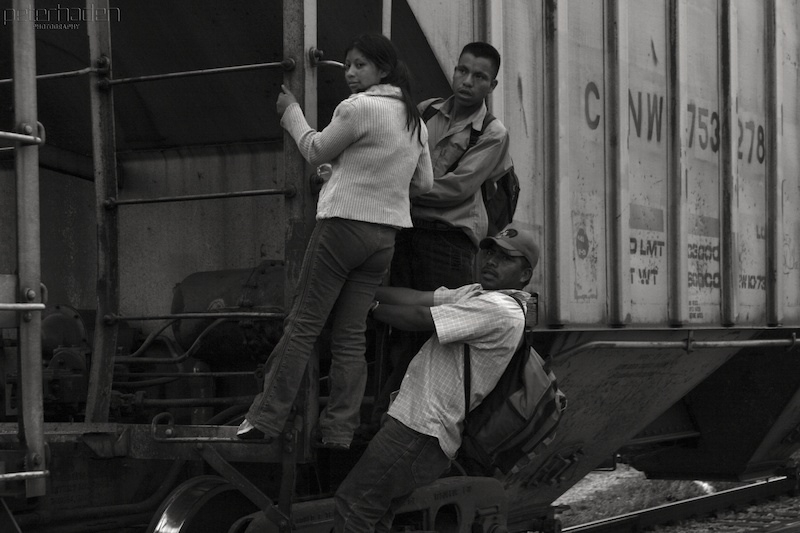 Every year around 500,000 refugees and asylum-seekers from El Salvador, Guatemala, and Honduras, desperately set forth on dangerous journeys searching for a safe place for themselves and their families. Migrants from these countries live in a region known as the Northern Triangle of Central America (NTCA), which is plagued with socio-economic instability, poverty, corruption, and chronic violence. Mass migration led to what is now a highly complex border crisis in the U.S. that continues to be a matter of great concern. Studying the roots of migration helps understand the many interrelated factors driving people out of the region—some of which have deeper roots in the expanding trends of inequality that started years ago (Gómez Cervantes & Menjívar, 2018).

It is a misconception that the mass migration of children and families from the Northern Triangle is a relatively new phenomenon. This idea stems from factors such as misinformation and political ideology. Although the number of people living in the U.S. who were born in the region increased by 78 percent from 2010 to 2019, large-scale migration from the Northern Triangle is traced down decades ago, starting in the early 1980s (Clemens et al., 2020). Flows from El Salvador and Guatemala increased rapidly in the 1980s due to civil wars within the geopolitical context of the Cold War that left profound scars in these countries and major incentives for migration (Pederzini et al., 2015).

Historically, land ownership and economic power in the Northern Triangle have been concentrated in the hands of a small group of elites, leaving a legacy of extreme inequality (Congressional Research Service, 2019). The trigger for the war in El Salvador in 1980 was due to wealth disparities that led to social unrest and eventually erupted into open social conflict. With Communist influences from the Cold War, the civil war was mainly between two primary actors: the left-wing Farabundo Martí National Liberation Front (FMNL) and the right-wing Salvadoran government. With the fear of Communism spreading in Central America, the U.S. sided with the government, providing military aid, training, and advisors (Allison, 2012). More than 75,000 Salvadorans were killed, in addition to thousands who disappeared or were tortured (Gómez Cervantes & Menjívar, 2018).

There was a similar situation in Guatemala. After WWII, Guatemala was one of the few countries that operated as a democracy. Yet, in 1954, the Central Intelligence Agency (CIA) helped overthrow Guatemala’s democratically elected president, Jacobo Árbenz, who supported land reform that benefited the Indigenous peasantry at the expense of the U.S.-based United Fruit Company and other private interests (Bracken, 2016). Six years later, a rebellion to overthrow the military regime started the war. Like in El Salvador, there was a conflict between the leftist guerilla groups and the U.S. government-supported military. The Guatemalan civil war lasted 36 years and was one of the most brutal in Latin American history resulting in more than 200,000 killed and more than half a million driven from their homes. By the end of the 1980s, 90 percent of the Guatemalan population lived below the official poverty line, and 10 percent were displaced (Bodenheimer, 2020). In Honduras, although full-scale violence did not break out, emigration accelerated throughout the 1990s because they received immigrants escaping from Guatemala, El Salvador, and Nicaragua, in addition to the devastating consequences of natural disasters on the Honduran population like Hurricane Mitch (Pederzini et al., 2015).

These events and their long-term effects forced thousands of Central Americans to flee north. Both the Salvadoran and Guatemalan civil wars ended with peace accords in the 1990s, yet the effects of these events were already deeply fixed in their societies. They completely transformed the countries’ social structure, and the accords were not enough to mitigate the damage and widespread violence that would continue decades ahead. As a result, between 1980 and 1990, the Central American immigrant population in the United States tripled (Batalova et al., 2019).

The civil wars left behind oppressive and unequal militarized societies (Gómez Cervantes & Menjívar, 2018). Additionally, socio-economic issues fell to the bottom of the peace accord’s agenda, leaving the catalyst for the civil war in El Salvador unresolved and aggravated. The main reason for this was the difference in economic and political philosophies between the guerilla groups and the government. According to the Brookings Institution, “outside mediators should have understood the reason for avoiding discussion of socio-economic issues and insisted on international funding for the necessary reconstruction of the country and the training of its people for peaceful, civilian lives” (Negroponte, 2016). Ignoring key issues as crucial as socio-economic disparities that were catalysts for wars and current social unrest, was one of the many mistakes made in tackling the root problems of inequality, which is a major push factor for migration. Longstanding economic problems reappeared shortly after the end of the war and led to unemployment and a lack of opportunities (Pederzini et al., 2015).

There was also no emphasis on the importance of generational change, in which the youth could lead the country towards a brighter path. For the youth in the Northern Triangle that grew up surrounded by violence and weapons—on top of the lack of job opportunities and the pessimistic advancement within the country—it was easier for them to carry out the violence they were exposed to throughout their lives. The lack of investment in the next generation through quality education and skills training set up the perfect conditions for the recruitment and formation of drug cartels and organized crime groups (Negroponte, 2016). The deportations of Central Americans from the U.S. in the 1980s significantly exacerbated this critical issue. The deportees were mostly young Central Americans born in the U.S. or those who migrated during the civil war and formed gangs in Los Angeles. A study by the United Nations Office on Drugs and Crime indicated that after U.S. Congress passed the Illegal Immigration Reform and Immigrant Responsibility Act in 1996, nearly 46,000 convicts got deported to Central America between 1998 and 2005 (Azpuru, 2016). With the precarious situation in the Northern Triangle countries, many found it difficult to adjust. They found themselves in a place with a broken law enforcement system and where opportunities were scarce. So, they took advantage of the weak institutions and regulations to continue their gang activities. This then contributed to the proliferation of illicit activities and the exponential growth of gangs in the region (Viswanathan, 2018).

Problems that grew because of deeper-rooted causes for Northern Triangle migration are mostly linked to violence and security issues. Today, Honduras, El Salvador, and Guatemala have the highest homicide rates in the world. The levels of violence are even higher than during the civil wars, and they are not unlike that of individuals currently living through war. Data from the UN Office on Drugs and Crime (UNODC) in 2017 showed that violent death rates in El Salvador were higher than all countries suffering armed conflict except for Syria (Medecins Sans Frontieres, 2017). The Northern Triangle countries are also some of the poorest in Latin America, having some of the lowest gross domestic product (GDP) per capita in the region (Statista, 2020). The years since the civil war peace accords continue to have a trend of worsening living conditions, widening inequality, and economies hard to sustain.

Though the adoption of market-oriented economic policies in the 1980s and 1990s produced greater macroeconomic stability and facilitated the diversification of the region’s agricultural economies, the economic gains did not significantly improve living conditions for the poor (Congressional Research Service, 2019). A vital source of foreign exchange revenue that keeps these economies alive is the remittances that Central Americans abroad, mostly in the U.S., regularly send to their families. According to The World Bank data, these remittances totaled around $5 billion in 2017—roughly one-fifth of the country’s GDP—that allow Central American economies to pull through (Gómez Cervantes & Menjívar, 2018). Governments in the region also struggle to address the region’s socio-economic and security conditions. Since the regional civil wars in the 1900s, the countries face many challenges in transitioning to democracy. A lack of political will, corruption, and some of the lowest tax collection rates in Latin America all contribute to underfunded state institutions. Also, weak institutions limit these countries’ abilities to protect citizens or prosecute crimes, so their border areas are vulnerable to criminal trafficking of people, arms, and drugs (Congressional Research Service, 2019).

Over the past twenty years, the U.S. has taken significant measures to help Northern Triangle countries manage mass migration flows in the form of financial aid and immigration policies. Financial aid that targets main problems like economic instability and violence certainly help reduce migration. However, they mostly reduce it in the short term and fail to have a lasting impact on corrupt governance or stable economic growth. The Biden administration is committed to boosting spending to $4 billion to address the underlying causes of immigration in Central America, but it will face challenges prioritizing how to invest the money for it to have a long-lasting effect (Call, 2021). Analyzing the root causes of the humanitarian crisis in Central America is crucial to mitigate the push factors for migration that allow finding long-term solutions, rather than those that only provide a temporary life jacket to stay afloat.