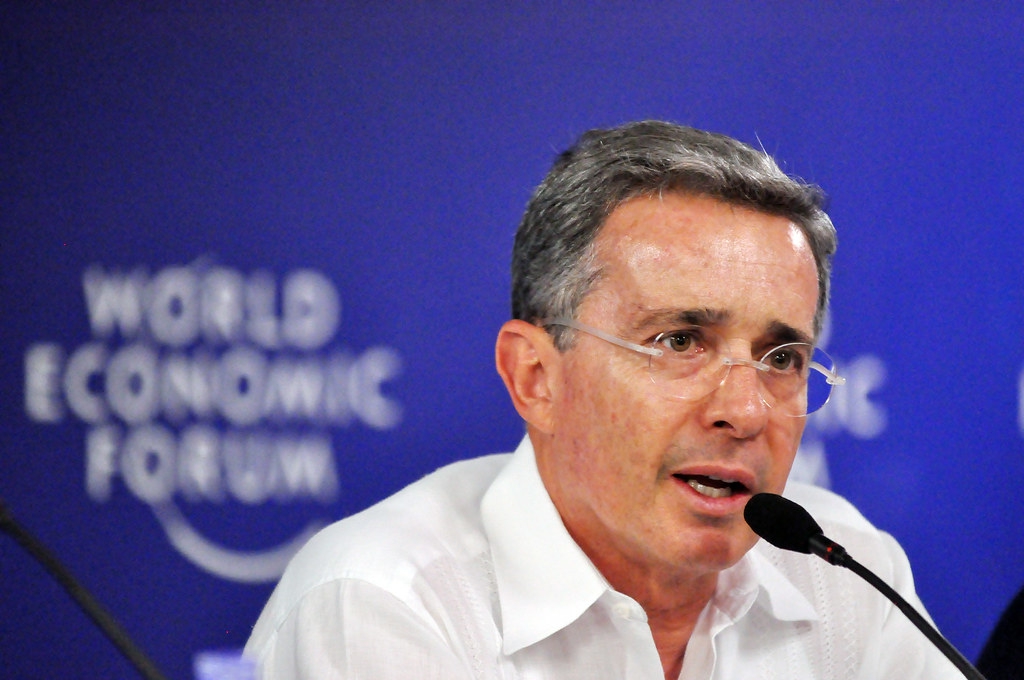 Álvaro Uribe Vélez was the 31st president of Colombia between the years 2002 and 2010. He had previously served as a senator, governor, and mayor in Colombia and had a favorable reputation among the Colombian people. Uribe was part of the Colombian Liberal Party during his presidency, a centrist but socially liberal political alliance. Through his time in government, he denounced leftist guerrilla groups, including the Revolutionary Armed Forces of Colombia (FARC) and the National Liberation Army (ELN). He also fought against rightwing paramilitary groups like the United Self-Defense Forces of Colombia (AUC). Fighting extremist groups in Colombia was a critical part of Uribe’s campaign and political platform, causing him to form his own political party, Centro Democratico, after the Liberal Party’s declaration to support peace agreements with FARC. Uribe has continued his anti-leftist guerrilla group works outside of his presidency by leading a campaign to reject a peace process between the Colombian government and the leftist rebels in 2016. He supported Iván Duque Márquez, a rightwing candidate, in the presidential election in 2018, who has followed Uribe’s opposition against peace agreements with FARC. Uribe’s influence in Colombian power is still secure, even without his position as President.

Previous to his presidency, Uribe served as the mayor of Medellín in 1982, but five months into his term, he was discharged by the standing President, Belisario Bentacur, for his alleged corroboration with drug traffickers. Uribe has been accused by many, including a civil aviation agency that he led, which accused him of “giving air licenses to drug traffickers” (Armario 2019). The United States has also revealed that declassified State Department cables showed that the U.S. government was warned that a Colombian politician that was gaining support had relations with drug cartels (Armario 2019). After years of investigation, Alvaro Uribe has finally been brought to court for witness tampering charges. According to Colombia Reports, Uribe is also facing other criminal charges, including bribery, influence peddling, obstruction of justice, and impersonating an officer. This is the first time a Colombian ex-president has been brought to court.

Uribe’s time in government is marked by the de-escalation of left and right-wing extremist groups and a unified attempt with the United States to combat the rise of drug trafficking in Colombia. For this, some of the Colombia people have a favorable view of him and his administration; however, others denounce the extreme human rights violations that occurred under his administration and his covert relations with the drug trafficking industry. Some proclaim him to be the “Gran Colombiano” or the Great Colombian and have taken to the streets during his trial to show their support. However, others are skeptical of Uribe and the many allegations of his ties to drug lords, including Pablo Escobar. According to Vanguardia 2013, Uribe has 276 investigations against him. Uribe has cast himself as a hot issue in Colombia, forcing many to feel one way or another. According to the Washington Post, “The case has divided the South American nation and set off demonstrations both in favor and against the ex-president” (Armario 2019). This case will also prove as a test for the integrity of Colombia’s judicial system, “which through its history, has struggled to hold prominent political and military leaders accountable” (Armario 2019).

The trial is acting as a monumental step in Colombia and Latin America to try and potentially hold powerful elites responsible for their actions in government. In 2014, an investigation regarding Uribe’s ties to paramilitary members was underway. According to the Cartagena Explorer, “In 2014, Uribe filed witness tampering charges and slander charges against fellow senator Ivan Cepeda, who had been interviewing former paramilitary members who claimed they had close ties to Uribe” (McConnaughhay 2019). This claim from Uribe acted as a way to delegitimize Cepeda and force him into legal trouble before he could come to any conclusions in his investigation. McConnaughhay continues stating, “According to Cepeda, these witnesses claimed Uribe was responsible for the formation of the Medellín based Bloque Metro.” The Bloque Metro was a Colombian paramilitary front in Antioquia, Colombia, that is associated with the previously mentioned right-wing United Self-Defense Forces of Colombia (AUC). Through an investigation of Cepeda by the Colombian Supreme Court, the court found that he was innocent and that it was actually Uribe and his lawyer, Diego Cadena, who had manipulated the witnesses, forcing or bribing them to testify against Cepeda. Ivan Cepeda then claimed that he had information to conclude that Uribe was a “founding leader of a paramilitary group in his home province during the decades-long civil conflict involving government, leftist rebels, and right-wing bands” (Armario 2019). This accusation is crucial as these paramilitary groups have been found to be responsible for killing civilians, drug trafficking, and displacing Colombians due to the internal conflict. According to the Colombia Report, “After his first day in court last week, Uribe shifted the responsibility of the wiretapping to Cadena. On Sunday, the former president said, ‘I don't know about any bribes or fraud’” (Aslema 2019). This is in reference to a June 23 wiretap in which Diego Cadena told the ex-president “if there is a misinterpretation for a reason X or Y, Diego Cadena will assume all responsibility” (Aslema 2019). The trial will seek sufficient evidence to connect Cadena’s actions to Uribe.

Many are thrilled that Uribe is finally being brought to trial, which began on September 3rd. With the long list of witnesses, Uribe first testified Tuesday, October 8, but the investigation will most likely go on for quite some time. Uribe has maintained his innocence by denying all allegations against him. Also, Uribe reportedly has the support of President Duque and the Centro Democratico party has stated that the case is a set-up (Reuters). With Colombian people divided, protests against and supporting Uribe have gathered in major cities. This trial is one of the most significant cases against a Colombian politician and could potentially cause other investigations of Uribe to be pursued. Uribe follows other Latin American ex-presidents including Alberto Fujimori of Peru, Luiz Inácio Lula da Silva of Brazil and Antonio Saca of El Salvador who have all been charged or convicted after their presidency.

Álvaro Uribe Vélez, however, has recently taken to social media in order to air his grievances regarding the trial. An action many are questioning due to the ongoing investigation and privacy of details. The breach of confidentiality could further the legal troubles Uribe is already subject to, but that will be determined by the head of the investigation, Cesar Augusto Reyes. The decisions made by the magistrate will determine whether elite status and political power continue to prevail over judicial processes.