National Heroes, or Horrors? Cubans on Fidel, Che and Martí 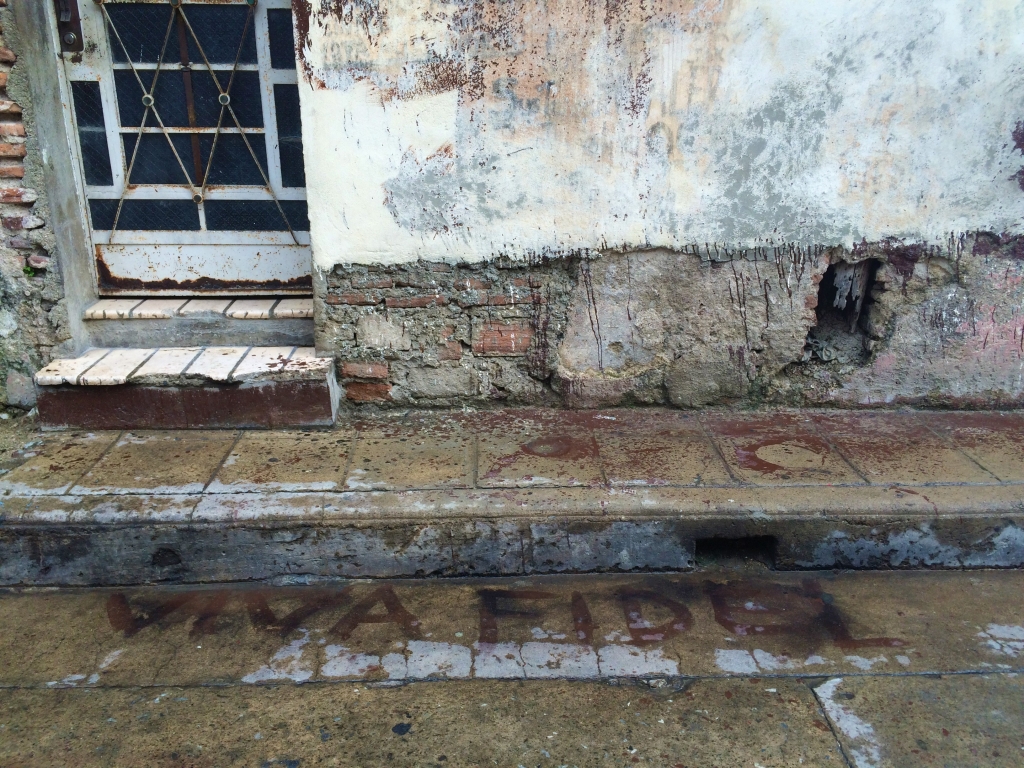 In Cuba, a country where omnipresent political propaganda makes nationalism seem to be less of an option and more of a legal obligation, the streets are filled with images of historical figures. Posters, billboards, statues and placards present the likenesses of war heroes to the public at every turn. Faces of legendary revolutionaries watch the Cuban people’s every move. Any Cuban can recognize the names and faces of these dozens of men whom time has immortalized—men who led the wars of independence, or rebelled against the dictatorships that plagued Cuba over the first half of the twentieth century. But by far the most iconic, and ubiquitous, of these national heroes so adored by government propaganda are Fidel Castro himself, Ernesto “Che” Guevara of international repute, and the almost-mythical martyr José Martí. It’s not inaccurate to say that one cannot walk a block in Havana, Cuba without seeing one, if not all, of these men’s images.

Obviously, the government has done everything it can to ensure that Fidel, Che, and Martí, whether living or dead, remain alive in the collective mind of the Cuban public. And live in the public mind they do—but what does that public mind actually think of them?

As one might expect, public opinion on the three revolutionaries is far more varied than the government would prefer. I visited half a dozen cities and towns in the western and central provinces of Cuba collecting impressions on Fidel, Che, and José Martí. While sentiments on ex-president Fidel and socialist leader Che are split between positive and negative, Cuba’s true hero is José Martí, a universally beloved writer and intellectual who led the country to freedom from Spain in the War of 1895, the more successful of the two wars for independence waged in the second half of the 19th century.

“Fidel is a sick man. A malignant man,” a woman told me in the city of Camaguey. Everything that has gone wrong in Cuba in the last half century, the 45-year-old with a degree in art history continued, is the fault of Fidel Castro—none of it, she said, is the fault of the United States, like Fidel’s government does its best to make the Cuban public believe. She’s not the only one who feels this way about Fidel, who ruled the country for 17 years as Prime Minister and, immediately following, for another 32 years as president, only stepping down to allow his younger brother Raul to take the post in 2008. Young people in particular share this intense loathing for Fidel, since his socialist regime in Cuba commits appalling human rights violations in order to eliminate dissidence. But other Cubans, who often tend to belong to older generations, feel strongly that Fidel is a good leader. “VIVA FIDEL” is not an uncommon message to see graffitied in the streets. A 54-year-old man from Playa Girón told me that the reason young people don’t like Fidel is that they have not been alive long enough to understand what he has done for the country. They weren’t around during the Revolution in 1959; they didn’t experience Fidel’s (truly) tremendous achievements in cultural outreach, education, and public health during the 1960s. Rather, they were born just after the fall of the Soviet Union in 1991—when Cuba lost 80% of its imports and exports due to the loss of its biggest trade partner.1 This was the beginning of Cuba’s four-year “Special Period,” during which transportation, production and agricultural industries were paralyzed, and a food crisis took hold of the country. Cubans who are in their 20s today were born during or around this economic disaster, and their lives have been shaped by this fact.

The man from Playa Girón maintains that young people don’t understand the history of Cuba enough to have an informed opinion about Fidel. When I asked a 57-year-old professor of mine in Havana about this, he said, “Well, he’s right, but it’s not that simple.” Of course today’s younger generation does not know the pre-Revolution Cuba, he said; of course they “don’t know unemployment, they don’t know official racism, they don’t know illiteracy, they don’t know what it is not to have doctors or medicine if someone gets sick or dies in your family.” But, he told me, “this doesn’t justify” the “errors” in economic and social policy that the government has made.

It’s true that in 1961, Fidel’s extraordinary literacy campaign taught over 700,000 poor farmers to read, bringing literacy up to 96%.2,3 It’s also true that right now, there are dozens, if not hundreds, of political prisoners being held without trial in Cuba for questioning the government.4 Issues like these are why many Cubans admit to ambivalent feelings about Fidel: in the words of a taxi driver in Havana, “I don’t know. He does very bad things, he does very good things.” At the end of the day, few Cubans look up to Fidel in the way that they used to. “No, no. Fidel isn’t a national hero,” a 24-year-old professional singer told me. “He may once have been, but he’s not anymore.”

Feelings on Ernesto Guevara are similarly diverse. Che was in fact not a Cuban, but an Argentine who met Fidel and Raul Castro in Mexico in the mid-1950s while the brothers were exiled by Cuba’s then-dictator Fulgencio Batista. The Marxist radical teamed up with the Castros to overthrow Batista and establish socialism in Cuba, hoping to spread it throughout Latin America. But when his guerrilla forces tried to bring the Revolution to Bolivia, he was captured and executed in 1967, becoming a martyr in the process. Today, his is perhaps the government’s most preferred face for visual propaganda. Whether this is due to his martyr status or his internationally recognizable rugged good looks, Che appears everywhere—and I mean everywhere. He broods on the walls of buildings, he contemplates the faraway horizon on flags, he glares resolutely into the distance on street posters while his easily quotable rhetoric (“¡Hasta la Victoria Siempre!” Towards Victory Always!) hovers around him. His spectacularly iconic image is especially popular on tourist merchandise like T-shirts, postcards, and mugs.

So what do Cubans feel when they see him watching over them at every turn? The answer is either pride or discomfort—but if it’s the latter, it’s very discreet. It turns out that it’s harder to openly hate a long-dead martyr than a living leader who has messed up tons of times since his glory days passed fifty years ago. Often, Cubans I met were very interested to know my opinion of Che before disclosing their own. The truth is, I was told in low voices by Cubans in multiple cities, many think of Che as an “asesino”—a murderer. He was the head executioner for Castro’s regime in the early 1960s, and the deaths of several hundred people are attributed to his extra-judicial orders (some sources today say that he is more likely responsible for thousands of executions, most of them innocent dissidents).5,6 “Many young people were killed by [the regime]. Children like you,” a woman in Camaguey told me.

So if Fidel is seen as an evil megalomaniac and Che a ruthless killer, are there any national heroes that the people actually look up to? The answer is, absolutely. José Martí, who has been dead since 1895, was highly revered at the time of his death and a hundred years later is practically worshipped.

Martí’s face is omnipresent, but in a different way from Che’s. Sure, Martí is all over the billboards, but his presence goes beyond pure propaganda. He appears on the Cuban 1 peso—both the bill and the coin—and a bust of his likeness is present in and outside every academic or scholarly building. His thin face, his thick mustache, his receding hairline and dark, intent eyes—all are as familiar to Cubans as their own appearance. So are his words, such as “This is the virtuous time, and we must ground ourselves in it.” A genius poet, journalist, essayist, lawyer, politician and war general, Martí was responsible for uniting the Cuban people—rich and poor, city and farm folk, intellectuals and peasants—in order to force the Spanish to relinquish one of its last remaining colonies. (In fact, they did not end up relinquishing Cuba to the Cubans but to the United States—a historical fact that is integral to understanding today’s relations between Cuba and the U.S., but is often forgotten.) For bringing the Cubans together after their disunity had caused the first war for independence to fail, Martí became the foremost founding father of the country. It didn’t hurt that he was killed by the Spanish in his very first battle and turned into a martyr for Cuba.

“To speak of José Martí in Cuba,” a middle-aged employee at an arts institute told me, “is to speak of perfection. Something pure.” Of course no human being is all good or all bad, he explained, but history has allowed José Martí to be remembered as good and only good. Had he lived longer he may have made some mistakes—as some view the case of Fidel Castro. But Martí in his short 42 years only had time to write beautifully, lead brilliantly and direct the successful beginning of a war. No one I spoke to had anything bad to say about Martí. “All good Cubans follow the suggestions of José Martí,” an older man told me in Havana. He quoted a few of Martí’s ideas from memory and smiled, saying, “He’s something biblical, huh?”

I couldn’t help but agree. Martí is regarded as sacred, almost holy, but I don’t think it’s a bad thing. In a society where hero worship is required for and by men who are widely detested, the Cubans deserve a historical figure that everyone can look up to—a figure that the country can be proud of.