The Making of the Freshest Cigars in Cuba 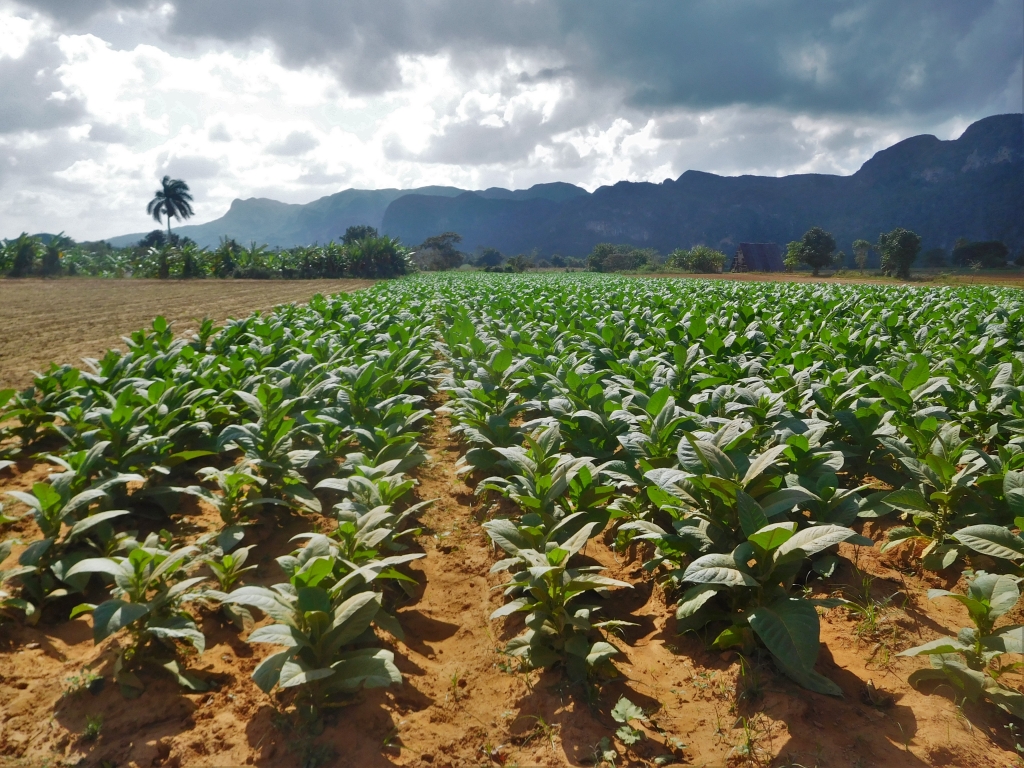 The small Cuban city of Viñales is a colorful town situated at the foot of the Cordillera de Guaniguanico, a sharply pitched, palm-and-vine-draped mountain range with awe-inspiring internal caves and strikingly stark facades. The rolling fields that surround Viñales are saturated with color: the rich red-brown soil is almost as vivid as the bright green tobacco leaves growing out of it. The tobacco fincas, or plantations, extend around Viñales and into the mountains where coffee is grown as well. At one of these fincas, called Cuerda Larga, I learned about the creation of some of the world’s most high-quality cigars.

“We have to select the leaves by their different colors for the different parts of the cigar,” a member of the family that owns Cuerda Larga told my student group as she sorted through a pile of wrinkly, five-to-ten-inch-long brown leaves on the kitchen table. “Here’s a fine leaf with a lighter color. This one we’ll use for the exterior—the capa. The capa should be a very pretty leaf.” The different colors—lighter or darker brown—depend, she explained, on the leaf’s position on the tobacco plant. “These darkest leaves are the strongest. They’re from the top of the plant, the crown,” she said.

Before arriving at this table, the tobacco leaves went through a several-month-long preparation process. After growing to maturity in the fields outside the house, the leaves were harvested, tied in clusters, and hung in rows from the ceiling of one of several tobacco-drying shacks. They dried there for four months. Once the leaves are dry, she told us, the government takes the best 90 percent. The family at Cuerda Larga is left with 10 percent of their tobacco harvest, and is allowed to roll them into cigars and sell them out of the house—but only the house, not in the city or at a market.

What happens to that other 90 percent? It is taken to factories in La Habana and made into brand-name cigars sold by the government—Cohiba, Montecristo, Romeo y Julieta, and many others. Those cigars can cost upwards of $USD 10 each, while at Cuerda Larga the cigars were sold for about $USD 2 each. But the difference in quality between the factory-made cigars and the cigars rolled and sold on the rural fincas is noticeable. My fellow students and I agreed that the cigars at Cuerda Larga tasted much better than any of the factory-made cigars we had tried in La Habana. “A good cigar should hold two to three centimeters of ashes on the end without the ashes falling off,” the woman at Cuerda Larga told us as we sampled the finca’s cigars while watching the demonstration. I eyeballed the cigar my friend was smoking—it looked like at least four centimeters of ashes were clinging to the end.

Part of what makes these cigars so excellent is the freshness of the leaves themselves. However, even more important to the flavor of the fincas’ cigars is the final step that the leaves go through before being rolled. After the leaves dry, the fincas soak them in a secret potion of sorts—a mixture of different flavorings that revive the natural fragrance in the leaves after the drying process has leached the essence out of them. The leaves are then re-dried and are now more flexible and flavorful. Every finca has a different recipe for this mixture. The family at Cuerda Larga wouldn’t give theirs away, but we were told that common ingredients include honey, rum, lemon, and guava juice.

While our demonstrator told us all this, she snipped and ripped the tobacco leaves on the table. Finally, she chose and laid out three leaves: a large, dark one; a smaller and slightly lighter one; and finally, a pale leaf just smaller than her hand. “These are the three parts,” she said, and pointed to them in order. “The tripa, for the interior. The capote, for rolling, and the capa, for the exterior.” She rolled the tripa within the capote with deft, sure hands, and then spread out the capa carefully, dotting both ends with honey. “We put the honey here as natural glue,” she explained. Then she rolled the capa diagonally along the cigar, twisted up the top, and cut off the end. “There. It’s ready to smoke.”

The Cuban cigar is internationally famous for its quality, but the house-rolled cigar is unique within Cuba. It is obvious that the quality of cigars made on the fincas benefits from the small-scale production. The family at Cuerda Larga takes great pride in their business. When asked when she learned to roll cigars, our demonstrator told us that she didn’t learn; it was knowledge passed down by her family over several years. She knew how to roll a good cigar by 13 or 14 years old, she estimated. On the Cuban fincas, cigar rolling is a family art, where each cigar is given the individual care that a family member would be. It’s no surprise that these cigars are considered the best in the world.