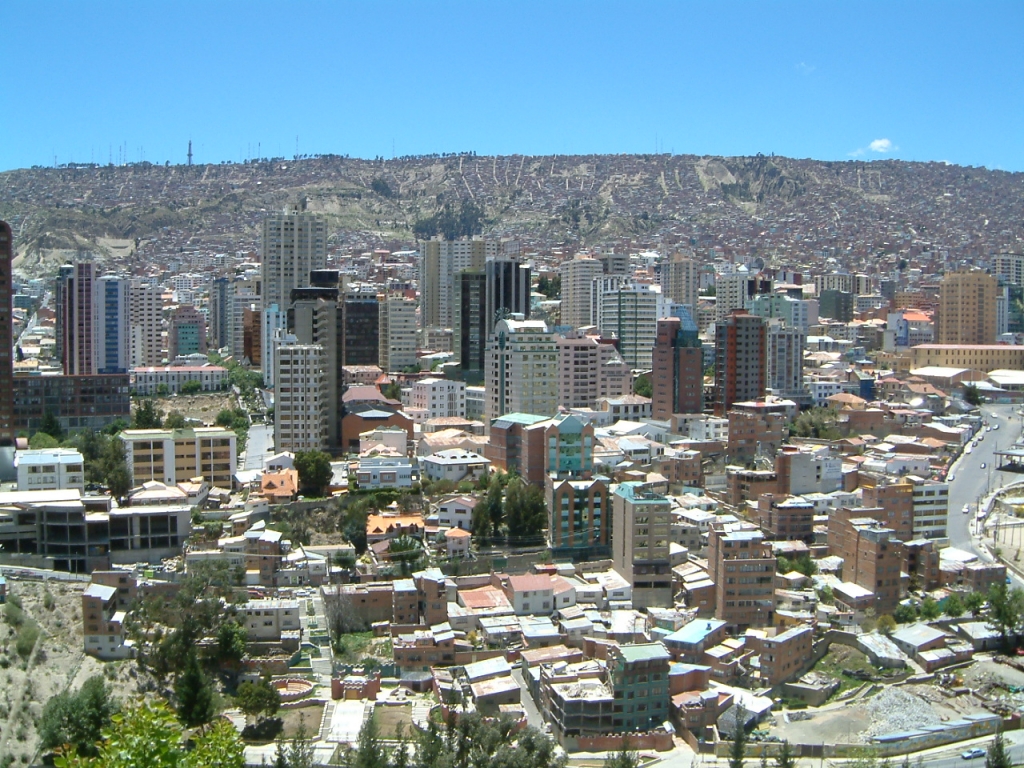 The Latin American political landscape is littered with political parties. Parties that once accumulated electoral victories and controlled the policymaking apparatus have now decayed or disappeared entirely. In their place, charismatic leaders and occasionally new party organizations have emerged.

Often these new leaders and their allies advocated for people who had been traditionally marginalized and championed causes that had been neglected. In doing so, they opened up representation and competition, at least initially. But shifting politics away from established patterns of partisan competition has also created greater uncertainty, heightened conflict, facilitated populist ascendance, and even opened the door to democratic erosion.

Of course, multiple factors influence party decay, and I have written an entire book about the complex process through which party systems fail. In that work, I argue that systemic collapse is caused when challenges to maintaining effective ties between state and society - challenges like economic crises, political reforms or social transformation - combine with institutional constraints that impede parties' capacity to adapt. When parties are unable to adapt appropriately to the challenges they encounter, fundamental representational failures emerge and precipitate party system collapse (Morgan 2011).

Here I delve more deeply into one important way in which challenges to linkage intersect with contextual constraints, thereby weakening established political parties. In my recent Latin American Research Review article, I demonstrate how institutional reforms, specifically the establishment of new subnational elections, pose challenges to the essential organizational structures of established parties.

Political decentralization restructures electoral competition, and established parties struggle to contend in new subnational elections while sustaining their national-level organization. During economic good times and when parties effectively use their ideological or policy positions to attract support, they are able to rise to the occasion and adapt to these competitive demands. However, if decentralization occurs when resources are scarce or where competition is based on clientelist rather than policy-based appeals, parties often fail to adapt and experience significant electoral decay. What's more, the challenges presented by decentralization are multiplied in party system contexts that are both resource-constrained and clientelist. 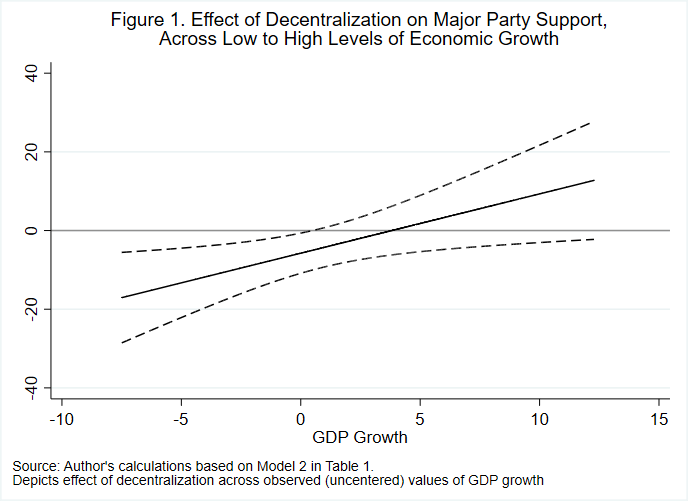 In the paper, I analyze the electoral successes and failures of major Latin American parties since 1975 to demonstrate the significance of these patterns across the region. Figure 1 here indicates that decentralization reduces the electoral success of major parties when economic growth stagnates at or below zero. Figure 2 shows that decentralization is particularly damaging to parties operating in systems without much ideological differentiation, while systems with more clearly articulated policy divides between parties are more resilient despite the pressures of decentralization. 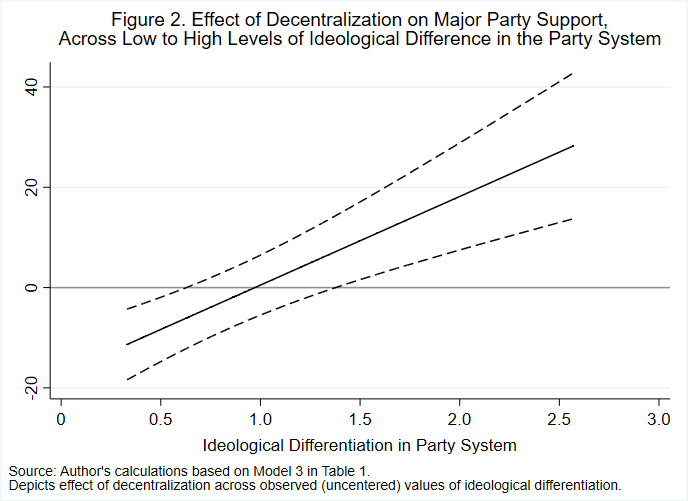 In addition, I offer more detailed evidence from political decentralization experiences in Venezuela, Bolivia, and Chile to clarify exactly how decentralization undermines existing parties and emphasize the importance of the economic and party system context for understanding the effects of institutional reform. The Venezuelan experience, for example, highlights how the reforms' resource and organizational demands contributed to system-wide party decay and emphasizes how economic crisis and limited ideological differentiation left the parties with few tools to respond to decentralization's demands. Although decentralization was certainly not the only factor that contributed to Venezuelan party system decline, the reforms weakened the traditional parties, which surrendered their dominant positions and now form part of the diverse anti-chavista coalition. Conversely, new parties, including pro- and anti-Chavez organizations that emerged in the context of decentralization, have solidified significant gains (Morgan 2018).

Together these findings indicate that decentralization is not a panacea. The context in which reforms are enacted matters, a lot. Reformers would be wise to avoid decentralization amid poor economic conditions or in party systems that exhibit little policy-based competition. The evidence suggests that institutional reforms often have unintended consequences, and great care should be taken when thinking about using institutional "fixes" for more substantive problems, like low-quality representation or corruption.

Indeed, this article joins an important body of scholarship that has emphasized ways in which political reforms of all sorts produce unintended consequences. Whether the move is toward decentralization, recentralization, or changing other components of the competitive environment, reforms that make existing organizational strategies inefficient or ineffective create substantial challenges for existing parties and make them vulnerable to new competitors.

The insights offered here concerning the timing of reform should be considered not only by domestic policymakers but also by actors in the international community who may exercise considerable influence over these reform choices. Of course, such foresight is not always possible. Therefore, efforts to strengthen parties, promote organizational flexibility and foster meaningful programmatic alternatives in order to shore up parties' adaptive capacity before any reform initiatives arise are an important complementary strategy for promoting the stability and quality of representation in contexts where resorting to institutional reform has become routine. 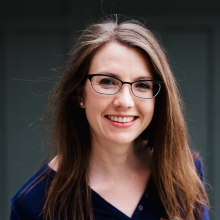 Jana Morgan
Jana Morgan is Associate Professor of Political Science at the University of Tennessee and Visiting Scholar at the Russell Sage Foundation. Her research examines how processes of economic, social, and political marginalization undermine democratic norms, institutions, and outcomes. Her book Bankrupt Representation and Party System Collapse (Pennsylvania State University Press 2011) received the Van Cott Award from the Latin American Studies Association. Her work on representation and exclusion has appeared in numerous journals in addition to LARR, including American Political Science Review, Comparative Political Studies, and Latin American Politics and Society. She tweets about political, economic, and social inequalities across the Americas at @prof_jmorgan. Personal website: http://web.utk.edu/~kellyjm/