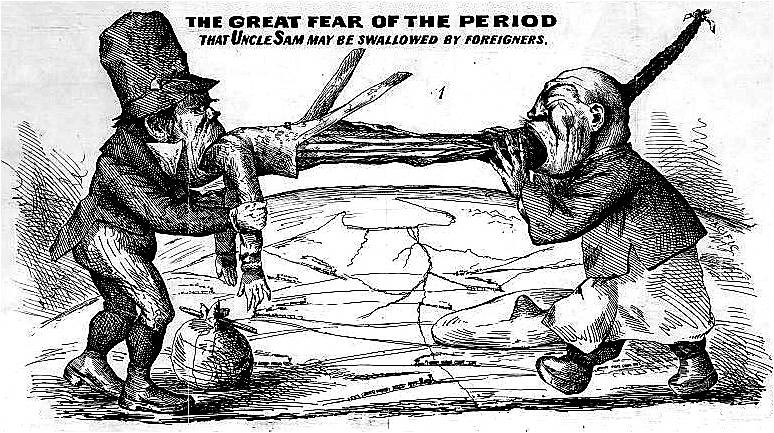 “The Darkey [is] but a few generations removed from the wildest savagery.”

Is Donald Trump a racist? He has famously denounced Mexicans as rapists (and promised to build a two-thousand-mile-long border wall), called for a temporary ban on Muslims entering the United States, and retweeted messages from neo-Nazis and white supremacists. The NYT’s Nick Kristof reviewed over four decades of Trump’s words and deeds towards minorities and immigrants, and concludes that the pattern of racism is consistent.

With polls showing the presidential race tightening, that same month the NYT’s Paul Krugman concluded that “a lot more Americans than we’d like to imagine are white nationalists at heart.”

Are they right? Who are Trump’s core supporters and why do they support Trump’s anti-immigrant policies?

A nationally representative survey I designed and YouGov implemented for me in spring 2011 suggests some answers to these questions.

Recognizing that not all Main Street American Democrats and Republicans are alike, I measured four different dimensions of American ideology: cultural (progressive vs. traditional), social (equality vs. group hierarchy), economic (favor vs. oppose income redistribution), and political (communitarian vs. libertarian). The third of Americans who self-identified as Republicans clustered into three equally sized ideological profiles: Teavangelical, moderate, and cultural (Christian right) Republicans. The approximately10 percent of Americans who were “Teavangelicals” expressed the greatest interest among the three groups of Republicans in “what’s going on in government and public affairs,” and so appear to be the most likely Republican primary voters, a plurality of whom voted for Trump.

My survey also included items like “The U.S. needs to improve its border security to prevent illegal immigration from Mexico,” which revealed that among white Americans, Republicans and conservatives preferred a vastly tougher Mexican border policy than Democrats and liberals did.

However, these Main Street partisan differences over immigration had nothing to do with differing economic and political ideologies. Instead, they were best explained by social and cultural ideologies. Where a morality of compassion for the disposed contributes to social liberal opposition to racial hierarchies and tougher Mexico border policies, a morality of authority and discipline underlies social conservative support for white dominance and tougher border policies. The “culture wars” play a major role as well. The 2011 survey data reveals that cultural conservatives fear the impact of Mexican immigration on Christian values and a “WASP” American national identity more than cultural liberals do. 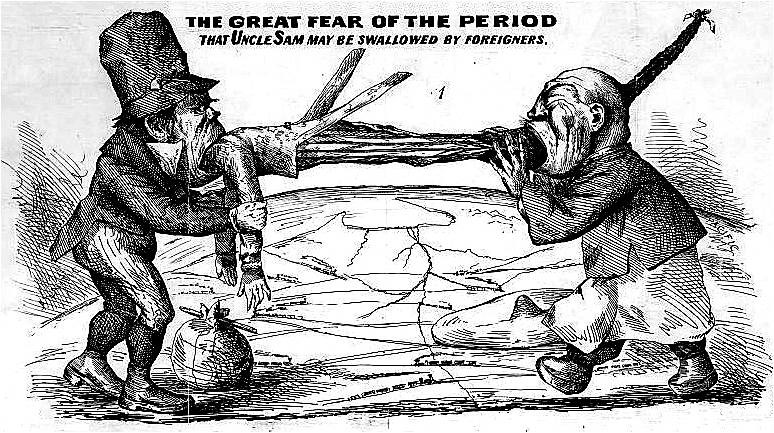 Source: 1860s lithograph courtesy of the Library of Congress.

Americans have been divided over the socio-racial and cultural politics of immigration for a very long time. Immigration and slavery, of course, conspired to make race a contentious issue in American politics from its very beginnings. In the 19th Century, one 1860s lithograph, entitled “The Great Fear of the Period: That Uncle Sam May Be Swallowed by Foreigners,” depicts Uncle Sam being devoured from both ends at once, with an Irish man swallowing his head and a Chinese man eating from his feet. Irish and Chinese immigrants, of course, were busy laying America’s transcontinental railroad system, displayed underfoot. 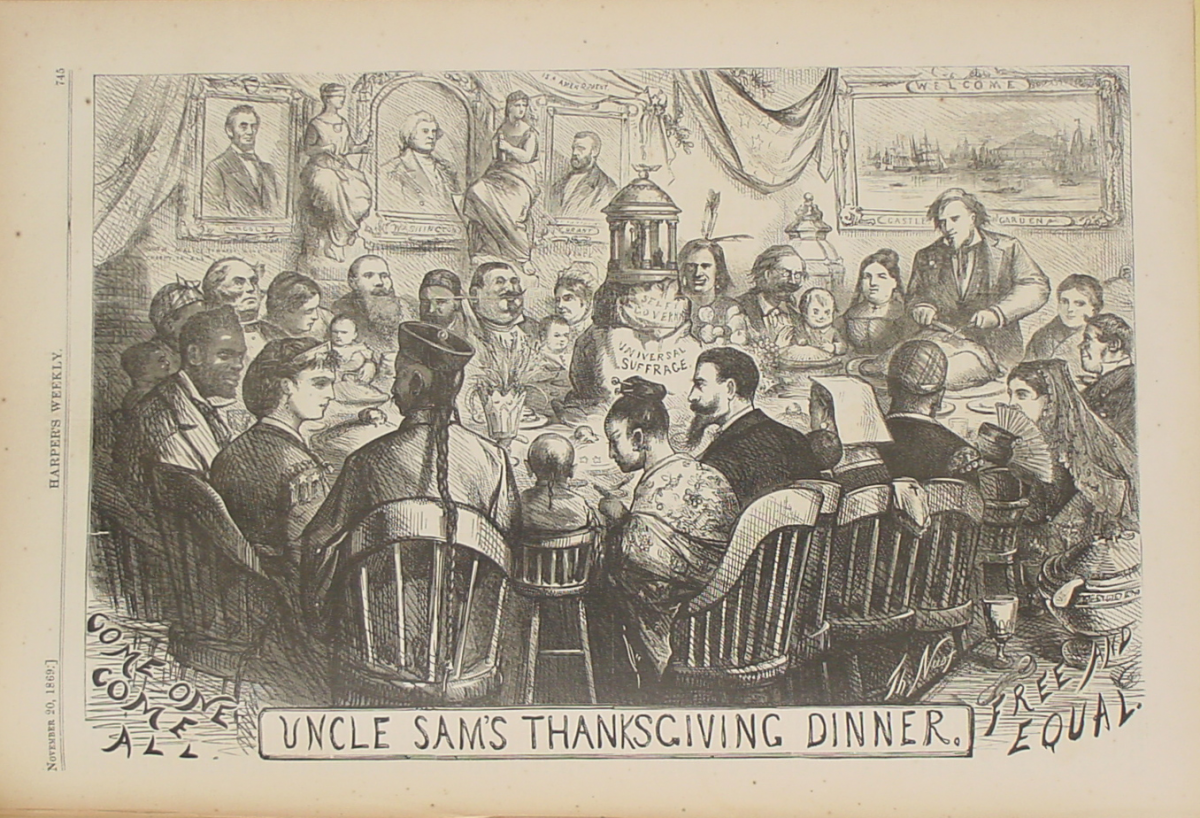 But this midnineteenth-century view of an Irish and Chinese racial menace did not go unchallenged. In an 1869 Harper’s Weekly, Thomas Nast portrays “Uncle Sam’s Thanksgiving Dinner.” The Civil War was over, and the Fourteenth Amendment had been ratified, granting equal rights and citizenship to all Americans. The peoples of the world, of every race, gather at the banquet table of “self-government” and “universal suffrage.” Uncle Sam carves the turkey while Columbia sits between an African and a Chinese, engaging in polite conversation. It is a welcoming, multiracial vision of harmony and equality. Nast also makes his point explicitly, writing, “Come One, Come All” and “Free and Equal.”

A social and conservative morality of immigration: The challenge to authority and social order, 1891. 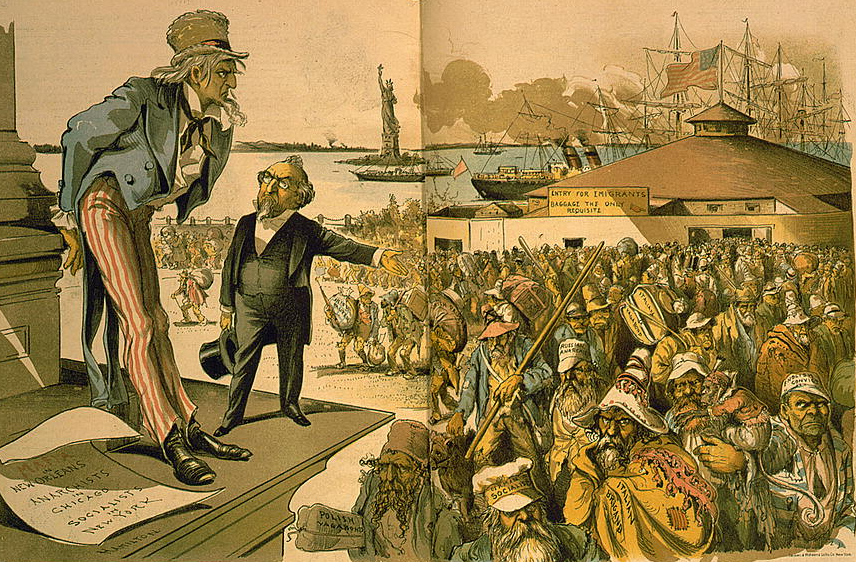 22 years later, Grant E. Hamilton’s 1891 “WHERE THE BLAME LIES” captures the same morality of authority and discipline that underlies the social conservative opposition to immigration revealed in our 2011 survey. It depicts a horde of grubby immigrants arriving in New York City. They are variously labeled “German socialist,” “Russian anarchist,” “Polish vagabond,” “Italian brigand,” “English convict,” and “Irish pauper.” A well-dressed man points at the mob and declares to a worried Uncle Sam, “If Immigration was properly Restricted you would no longer be troubled with Anarchy, Socialism, the Mafia and such kindred evils!” In Trump’s world, tougher immigration policies and a border wall would similarly eliminate rape, drugs, and crime more broadly.

These debates over immigration are closely linked to competing American feelings towards Latin America. In my 2011 survey, on a 100° feeling thermometer the average American liberal (53°), felt a whopping 28° warmer towards Mexico than the average conservative did (25°). And the problem is even worse when we home in on the Republican primary voters that Republican congressmen and senators fear most. Teavangelical Republicans (24°), highly motivated to vote in Republican primaries, felt 12° cooler towards Mexico than moderate Republicans (36°) did. Teavangelicals also desired a substantially tougher border policy than did moderate Republicans. 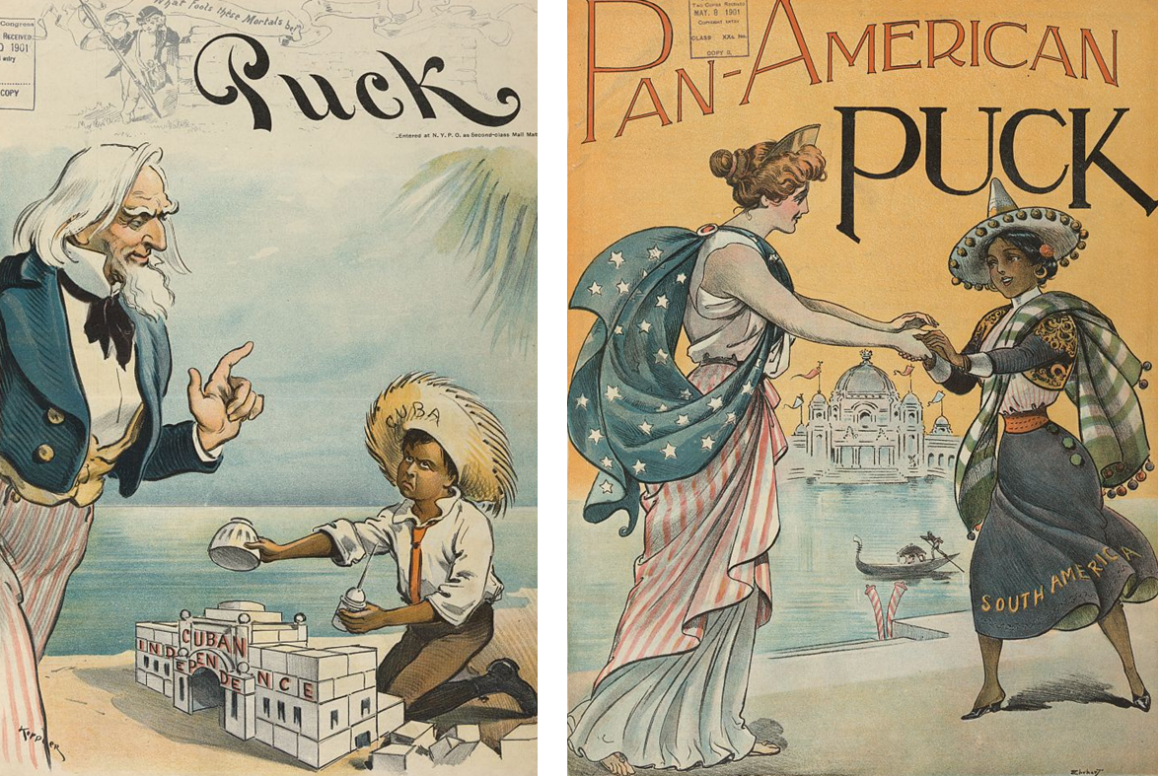 These competing views of the world south of the border are nothing new. Competing turn-of-the-century visions of proper U.S.–Latin American race relations were displayed on the covers of two 1901 Puck magazines. On the left, in “ENCOURAGING THE CHILD” Udo Keppler depicts a black boy labeled “Cuba” making a sandcastle on a beach. Labeled “Cuban Independence,” it resembles a capitol building. Uncle Sam, perhaps representing President William McKinley or Vice President Theodore Roosevelt, looks down on the child, wagging a finger: “That’s right, my boy! Go ahead! But, remember, I’ll always keep a Father’s eye on you!” Entitled “Encouraging the Child,” the drawing is a strikingly paternalistic representation of an American father’s properly superior position vis-à-vis his new Caribbean son.

Samuel D. Ehrhart’s “PAN-AMERICAN PUCK,” from just a month and a half later, depicts a strikingly different vision of North-South relations. A white Columbia welcomes a colored woman labeled “South America” to the Pan-American Exposition in Buffalo, New York. Although Columbia is foregrounded and larger than the dark woman, they smile at each other while holding each other’s hands. The gesture is one of sisterly equality and friendship.

These old editorial cartoons suggest that today’s immigration debate between the conservative defenders of a White Anglo-Saxon Protestant (WASP) view of American identity and liberal advocates of a more multi-racial and multi-cultural view of America has a long history—and is rooted in differing and deep-rooted moralities of (conservative) authority and (liberal) compassion. While it is important to remember that many—likely most—Republicans support Trump out of a pure partisan desire to defeat Clinton, it appears that about 10 percent of Americans support Trump in all his racism out of a fear that immigration represents a threat to their vision of a WASP America.

Peter Hays Gries is also author of The Politics of American Foreign Policy: How Ideology Divides Liberals and Conservatives over Foreign Affairs (Stanford, 2014) 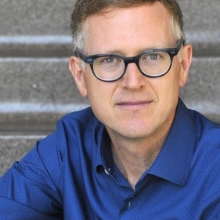 Peter Hays Gries
Peter Hays Gries is the Harold J. & Ruth Newman Chair and director of the Institute for U.S.-China Issues, and Professor of International Studies at the University of Oklahoma. He is author of numerous books and articles on the political psychology of international affairs.