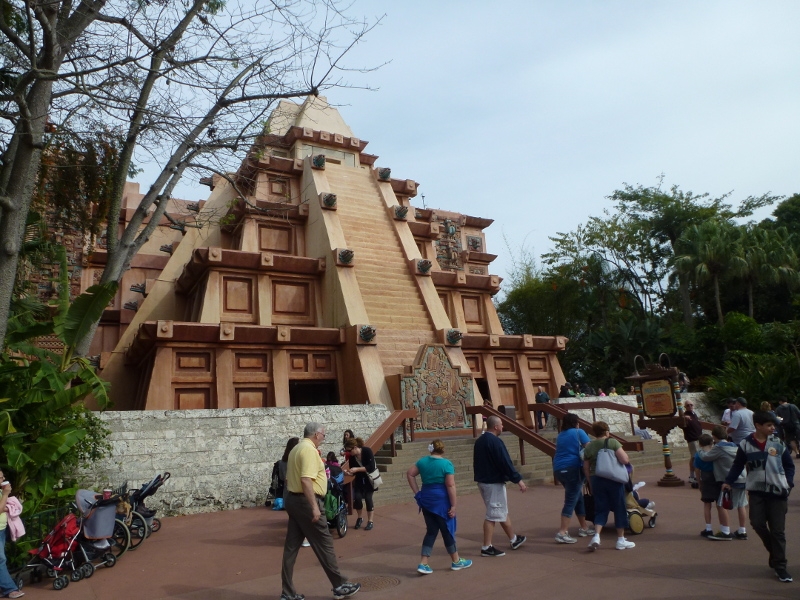 The 2016 U.S. presidential campaign has been unusually focused on Mexico. This is in large part due to Republican nominee Donald Trump’s proposal to build a wall between Mexico and the United States and deport millions of undocumented immigrants. In one particularly controversial campaign intervention, the Republican nominee suggested that U.S. District Court Judge Gonzalo Curiel as a “Mexican” would be unable to impartially judge a legal case involving one of the candidate’s business ventures. Judge Curiel was, in fact, born in Indiana to naturalized U.S. citizens from Mexico.

Author's photo of the Mexico pavilion 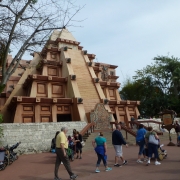 That the nationality of Curiel became a flashpoint for controversy during the 2016 presidential campaign speaks to a longer battle fought by people with Mexican heritage in the United States. During the 1960s and 1970s, Mexican American political movements arose with diverse focuses such as labor rights, community activism, gender equality, and LGBT rights. A shared characteristic of these movements was a rejection of de-emphasizing Mexican heritage as a route to acceptance and assimilation into U.S. society. Instead, Mexican American activists, artists, and intellectuals proposed a critical and selective reading and appropriation of Mexican history and culture as a tool of cultural, political, and economic empowerment.

As I discuss in a recent article for Latin American Research Review, a perhaps surprising artifact of this movement to reinterpret Mexican heritage in the United States is the Mexico pavilion at the Epcot theme park at the Walt Disney World Resort in Orlando, Florida.

The design of the World Showcase national pavilions was most directly guided by the logic of tourism.  Each country was represented through a pastiche of architecture, costumes, food, music, products, and brands that would be familiar to EPCOT Center visitors as authentically distinctive to each country.  Mexico was the only Latin American country represented and the Mexico pavilion obeyed a similar logic of recognizable authenticity.

The bulk of the pavilion (see video footage of the pavilion) was housed inside a structure that blended design elements from pre-Columbian Mesoamerican cultures. Visitors entered through the base of a pyramid and passed through an interior museum of pre-Columbian artifacts. Next, visitors encountered an indoor recreation of a Spanish colonial town plaza at night modeled on the historic silver mining town and tourist destination of Taxco. Scattered around the plaza were stalls selling Mexican handicrafts and branded products such as José Cuervo tequila. At the end of the plaza was an outpost of Mexico City’s historic San Angel Inn restaurant overlooking an indoor river and a Mayan pyramid framed by a diorama of smoldering volcanoes and tropical jungles.

The pavilion’s main attraction was the El Rio del Tiempo boat ride. This ride began with visitors floating through pre-Columbian structures that incorporated screens showing dancers acting out scenes displaying Aztec and Mayan culture and knowledge. Guests next floated through sets designed to resemble a Spanish colonial village in central Mexico populated by doll-like figures. Figures were presented in charro suits, battering a piñata, or playing a marimba alongside skeleton musicians of the Día de los Muertos. Visitors then drifted through sets and footage depicting Mexican beach resorts and vendors hawking souvenirs as a song played welcoming them to “friendly Mexico.” This journey ended in Mexico City, with fiber optic fireworks exploding overhead as visitors floated past a mural of the modern skyscrapers and Paseo de la Reforma boulevard of Mexico City.

As well as being the only pavilion to feature a ride, the Mexico pavilion was unique within World Showcase in that Disney sought people connected to the country represented to participate in its design. Disney committed to building a Mexico pavilion despite being able to secure support from the Mexican government. However, concerned at feedback from the Mexican Ambassador to the U.S. and Mexican exchange students that initial concepts did not accurately represent Mexico, the company’s theme park designers sought Mexican cultural expertise for the pavilion. For this expertise they went not to Mexico, however, but to East Los Angeles

Disney theme park designer X. Atencio approached artist Eddie Martinez in 1976 to develop and then oversee the creation of the pavilion’s ride. Atencio also hired layout artist Ray Aragon to work on the ride, principally in costume and set design. Martinez was born in Los Angeles to Mexican parents and Aragon was born to a Mexican father in Boyle Heights, Los Angeles. 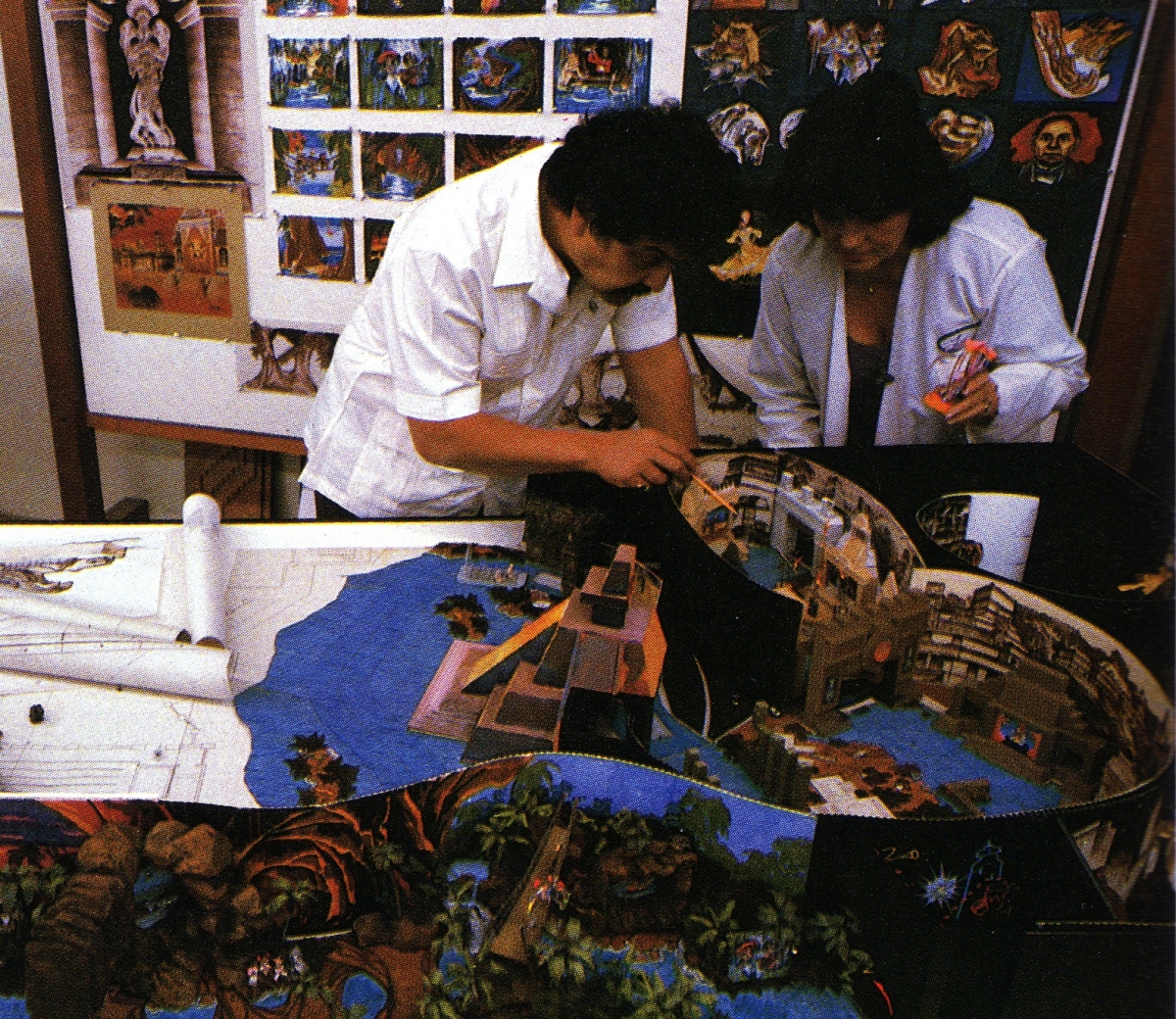 Both Martinez and Atencio were also notably associated with the pioneering Goez Art Studios and Gallery that during the 1970s helped establish East LA as a center of Mexican American cultural production. The creation and subsequent promotion of the Mexico pavilion drew a direct line between the authenticity of its representation of Mexico and its connection the cultural scene of East LA. In this way, the Mexico pavilion was representative of a blurring of cultural and geographic boundaries that was occurring as part of the Mexican American movement during the pavilion’s design and construction.

Founded by brothers Joe and Johnny González and artist David Botello, Goez was located on East First Street in East LA between 1969 and 1981. Goez functioned as an art studio, gallery, dealership, clearinghouse for muralists, import business, fine arts restoration studio, and cultural center. Goez’s founders further conceived of the gallery as a collaborative space for local artists and developed strategies to assist, educate, and empower the local Mexican American community. One such initiative was the East Los Angeles School of Mexican American Fine Arts (TELASOMAFA) that provided studio art classes, workshops for youth, and apprenticeships. Martinez served as the school’s one ongoing teacher alongside two guest teachers.

Artists working at Goez critically appropriated elements of the Mexican revolutionary nationalism developed and promoted by the Mexican state, artists, and intellectuals following the Mexican Revolution (1910-1920). In particular, Goez artists drew upon postrevolutionary Mexican murals, monuments, and indigenous and folkloric imagery. Many of the more theatrical elements of Mexican culture promoted by Mexican state cultural and tourism institutions were reflected in the costumes and sets designed by Aragon for the folkloric scene of El Rio del Tiempo.

Martinez cites his involvement with Goez as profoundly shaping his own sense of Mexican American identity. This involved an active process of learning and deciding what Mexican culture and identity meant. An important moment in this process came in January 1975 when Goez co-founder Joe González accompanied Martinez on a journey by car through Mexico to visit small towns, major cities, archeological sites, and museums to increase his cultural awareness. In the summer of that year, Martinez staged his first one-man exhibition at Goez, called Encanto en México, inspired by his experiences in Mexico.

After being hired to work on the Mexico pavilion, Martinez invited Mexican-born and Los Angeles–based danzante Florencio Yescas and his Esplendor Azteca dance group to choreograph and perform in the filmed segments of the ride’s pre-Columbian scenes. In Mexico, Yescas had been a significant figure in the promotion of a form of pre-Columbian dance and ritual called danza azteca. This formed part of a broader movement called La Conquista that aimed to recover indigenous languages and culture in a way that reversed the colonial dynamic. As La Conquista spread north of the border in the late-1960s, La Raza Cultural Center in San Diego invited Yescas to relocate to the United States. There, Yescas formed the dance group Toltecas en Aztlán and taught classes in folklore to Mexican American youth before moving to Los Angeles and creating Esplendor Azteca.

Beginning in the late-1960s, a distinctive re-interpretation of Mexico’s pre-Columbian cultures occurred in the context of Mexican American political and cultural movements.  The concept of mestizaje, or racial and cultural mixing, was central to postrevolutionary Mexican nationalism. However, in Mexico the mythology of mestizaje promoted a form of internal colonialism that erased the indigenous in favor of a homogenous mestizo culture and ethnicity. In Mexican American representational practice, mestizaje instead came to signify a hybrid form of identity that rejected fixed, binary categories of culture and nationality.

The concept of Aztlán as a Chicano spiritual homeland that spread across the contemporary U.S.-Mexican border further suggested an alternative cartography of belonging that pre-dated European conquest and the border’s establishment following the Mexican-American War (1846-1848). Martinez described Yescas as his mentor on Aztec thought while working on the Mexico pavilion’s ride, which in turn influenced subsequent explorations of Aztlán in Martinez’s work. Yescas and the la danza movement more broadly helped pioneer circuits of direct cultural exchange between particularly the southwest United States and Mexico based on this idea of connecting with preconquest Mesoamerican cultures. On his maps of East LA murals, Botello similarly blurred geographical and political borders, describing the location as “East Los Angeles, California, United States of America, Aztlán.” 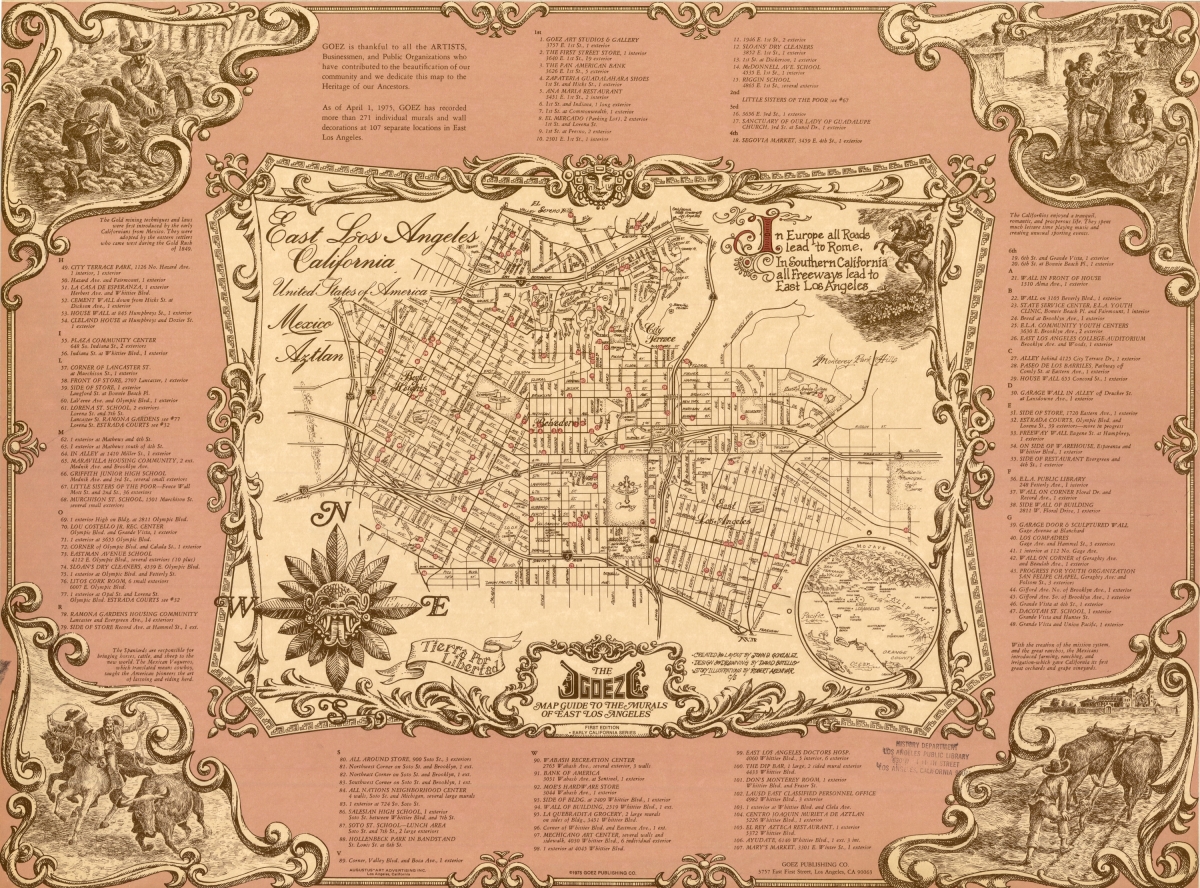 EPCOT Center’s Mexico pavilion did not explicitly reference these ideas. However, the pavilion’s creation was inextricably bound up in the cultural politics of the Mexican American and Chicano movements of the 1970s. The emphasis on Mexico’s pre-Columbian cultures in the pavilion’s design was particularly influenced by how Mexican Americans were reading and re-appropriating established images of Mexican culture. This process implied neither recovery of an “authentic” past nor accepting visions of Mexican national identity promoted by the Mexican state. Instead, it involved rereading and reworking Mexican cultural frames in the production of new identities in the context of the United States.

The activities of Goez in encouraging cultural, political, and economic empowerment for Americans with Mexican heritage in East LA are notable for blurring boundaries between high and popular culture. As well as taking inspiration from the murals of Mexican masters such as Diego Rivera and David Alfaro Siqueiros, Goez artists responded to the immediate cultural context of Southern California. Goez artists also often moved between the worlds of art and commerce.

Johnny González recalled that seeing appropriations of Mexican culture by people without Mexican heritage, including through brands such as Frito and Taco Bell, helped convince him that appropriating “Mexicanness” was a route to social inclusion and economic progress for Mexican Americans. Goez artists accordingly worked with Hollywood studios on projects related to Mexico. The gallery’s owners also unsuccessfully proposed a tourism initiative involving the construction of a historical district in East LA modeled on Disneyland.

The design of EPCOT Center’s Mexico pavilion that opened in 1982 was influenced by these efforts to embrace and harness Mexican heritage as a tool of cultural, political, and economic empowerment. There was no one Mexican American movement, but rather a loose network of movements and initiatives that challenged social, political, and economic structures in the United States to varying degrees. The impacts of this movement are similarly diverse, including, in the case of the Mexico pavilion, filtering into popular and mass culture. The intense focus on Mexico in the 2016 U.S. presidential campaign, meanwhile, shows the increasing importance to U.S. politics of these continuing struggles to defend, demolish, or blur physical and symbolic boundaries between the United States and Mexico. 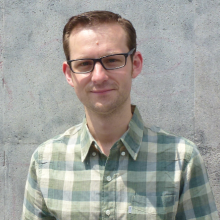 Randal Sheppard
Randal Sheppard is a postdoctoral researcher on the European Research Council project “Left-Wing Exile in Mexico, 1934-1960” at the University of Cologne, Germany. He holds a PhD in History from La Trobe University in Melbourne, Australia and is the author of A Persistent Revolution: History, Nationalism, and Politics in Mexico Since 1968, released by University of New Mexico Press in 2016. His current project focuses on Cuban-born designer Clara Porset and the politics of exile and modern design in mid-twentieth century Mexico.