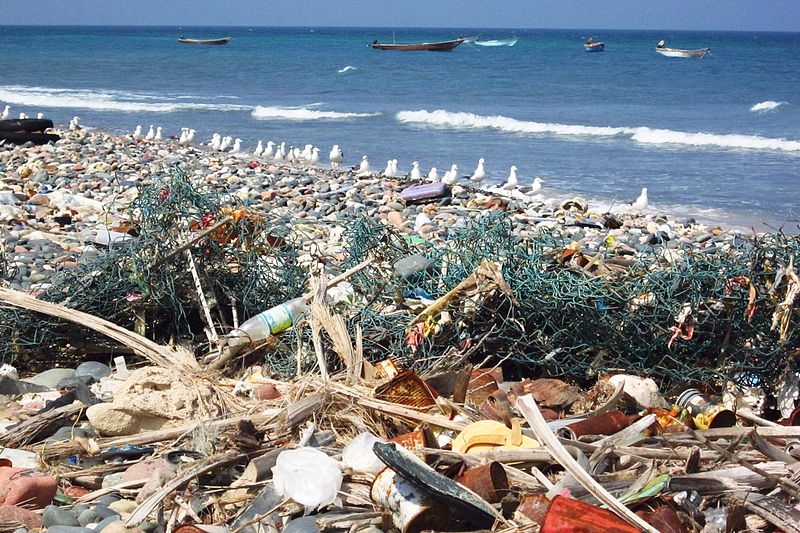 In Honduras, coastlines are suffocating under the overwhelming amount of trash which has been arriving relentlessly with the tides.  Unlike the various bottles and wrappers that occasionally wash up on the busy beaches frequented in the U.S., the phenomenon, which has particularly rocked the ecosystem of the Honduran island of Roatan, is better described as a wall of trash; it spans several kilometers and extends seven meters below the surface of the water (Sanchez 2017).

Although Honduran authorities became aware of the threat posed by the incoming trash three years ago, in the past year the problem has grown to unimaginable proportions.  Ricardo Alvarado, the mayor of Omoa, a small town on the Caribbean coast of Honduras, reported that his town hall pays for beach clean-ups, but the effort has been futile.  On average, 20 dump trucks each holding 460 cubic feet of trash are filled each day, but the crews’ work has barely made a dent in the layers of garbage covering the beach (AFP 2017).

Marine biologists have dubbed this slow-moving collection of garbage an eco-cide, and say the majority of its contents are coming from the Montagua River, the mouth of which is located in Guatemala.  The most obvious threat stemming from the eco-cide, of course, regards the ecosystem of the ocean and the coasts playing host to it.  Marine biologist Nancy Calix explained that much of the plastic from this agglomeration is being ingested by and killing marine life, including turtles up to three-feet wide.  The garbage that is sinking damages the underwater fauna (AFP 2017).  Another marine biologist, Gustavo Cabrera, reported that coral reefs, mangroves, and fishing patterns have been altered due to the limited amount of sunlight which is able to reach through the layers of garbage (Sanchez 2017).

The contents of the eco-cide has Honduran authorities particularly worried about their beaches’ health and how it will affect tourism.  The Minister of Natural Resources and Environment of Honduras, Jose Antonio Galdames, revealed in an interview that among the waste which has washed onto shore, he and his counterparts have seen “clothes, plastic, hospital waste, objects stained with blood, needles, syringes, animals and even human bodies” (teleSUR 2017).  There are heightened concerns that such occurrences will dismantle Honduras’ tourism sector in the affected areas.

Galdames considers neighboring Guatemala to be the source of the problem, saying that the majority of the Montagua River lies in Guatemalan territory, with 27 of these Guatemalan territories supposedly dumping solid waste.  In comparison, he reported that Honduras only has three bordering municipalities along the river, and he speculated that Guatemala is at fault for 86 percent of the discharges (teleSUR 2017).

For many Guatemalans, though, dependable and controlled trash disposal is not always an option.  The country has very little laws regarding trash disposal or treatment, and as a result there are many unauthorized and unregulated trash sites.  Just in one department, Santa Rosa, there are more than 100 illegal garbage dumps; only three of the 22 departments actually have authorization for their dumps, and even these do not meet health and safety standards (Pitán 2016).  The country also has 2,400 landfills, but 99 percent are not equipped with environmental instruments to ensure their safety (Pérez 2017).  This reality has influenced the country’s own health, in addition to the claims made by the Honduran government.  The UN stated that approximately one quarter of Guatemalans lack access to safe drinking water.  This figure jumps to nearly 50 percent in the country’s rural areas (Cahillane 2017).  Unfortunately, many of the habitants of these rural areas rely on the rivers, which are often used as trash and sewage disposal sites, for their drinking water.  As a result, one in 20 children under the age of five dies as a result of the contaminated water sources (AgroAmerica 2017).

Despite the persistent waste problems in Guatemala, the eco-cide may well be fed from a number of other sources.  Research has shown that over eight million tons of plastic enter the ocean each year, and any percentage of this amount could be finding its way into this eco-cide (Nace 2017).  There is additional research which supports that a large portion of the waste may be arriving from neighboring Belize, where approximately one percent of waste is thrown directly into bodies of water.  This is equivalent to 11 to 21.6 tons of waste being thrown into water sources each day, and while Guatemala and Honduras have the largest rivers feeding into the Gulf of Honduras, Belize has more rivers overall (Lu & Weiskel 2013).

Although it is impossible to place the blame in its entirety on just one group of people or nation, it is clear that actions must be taken to reduce the trash being swept out to sea.  So far, Guatemalan Environment Minister Sydney Samuels has promised to build a trash-handling plant on the Montagua River costing $1.6 million USD (AFP 2017).  However, Honduran authorities, stuck digging what were once pristine beaches out from under the never-ending trash, are asking for a more immediate solution.