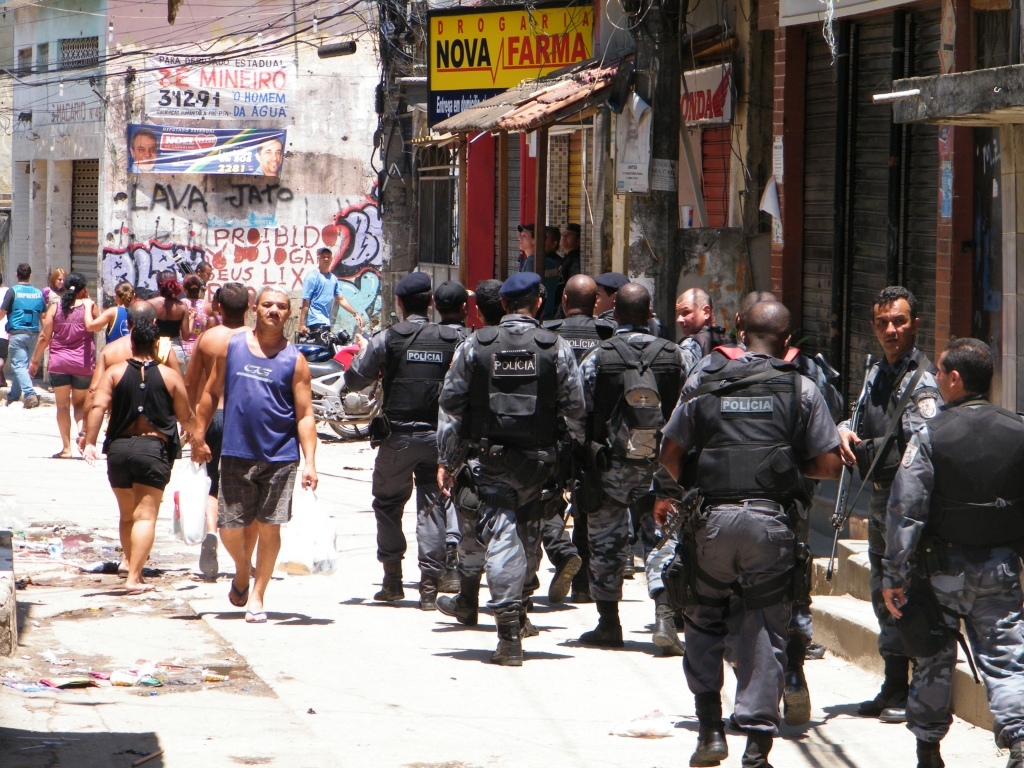 This October, the Brazilian Forum of Public Security (BFPS) reported that in Brazil, one person is killed every nine minutes, for an average of 160 violent deaths a day, in what is considered one of the world’s most violent countries. Using data from 2011 to 2015, the report highlighted not only the inability of Brazil’s law enforcement to protect its citizens but also the misconduct of police which directly endangers citizens, particularly poor young black men.2 Though the nation’s overall homicide rate decreased slightly between 2014 and 2015, police killings increased by 6.3 percent.1 Multiple human rights groups, domestic and international, have pressed Brazil’s government to address the problem, but institutional biases and lack of funding, among other factors, perpetuate the culture of violence.

Commentators have pointed out that, disturbingly, Brazil has seen more murders in the last four years than Syria.2 The wartime-like figures are no new trend in Brazil. In his 2006 essay in Informal Institutions and Democracy: Lessons from Latin America, in which he discusses police violence in Brazil and Argentina, Daniel M. Brinks writes that the amount of people killed by police in São Paulo in 1992 is “reminiscent of a civil war.” The astonishing number—1,428—is startling even for a state as densley populated as São Paulo, where from 1990 to 1994 the average police homicide rate was 2.2 deaths per 100,000 and from 1995 to 2000 was 1.61 per 100,000. Comparatively, Los Angeles, where police proportionally killed more people than any other major U.S. police department, had only about 0.5 reported police killings per 100,000 in the early 1990s. Other areas of Brazil have even worse police homicide rates, such as Salvador da Bahia, where complete statistics are difficult to find due to low or inaccurate reporting rates. However, an investigative commission counted a whopping 6.23 deaths per 100,000 in Salvador between 1996 and 1999.3

This year, Amnesty International called on Brazil to fix its police’s “‘shoot first, ask questions later’ strategy.”4 In São Paulo and Salvador, Brinks investigated this attitude that has prevailed up and down the ranks of Brazil’s law enforcement for decades, if not for as long as there has been law enforcement, and found that police who carry out extrajudicial killings have almost certain impunity. Brinks’ own study found a six percent conviction rate of police homicides in São Paulo and a three percent rate in Salvador. Moreover, officials at all levels—within the courts as well as within police departments —have no interest in trying a policeman who kills someone while on duty, especially if the individual already has a criminal record or has had past trouble with the police, as Brinks was told by prosecutors in São Paulo. Brinks also relates that a police investigator in Salvador was regularly told by police departments, “We have better things to do than to clear up the death of a criminal.”3

Brinks’ findings, compiled from the 1990s and analyzed in the early 2000s, shed light on the current situation in Rio de Janeiro’s police pacification units, where police violence has recently escalated so alarmingly that Jose Mariano Beltrame, the state’s security secretary who organized the program, resigned earlier in October.5 The pacification units were created in 2008 and installed in Rio’s favelas, or shantytown neighborhoods where poverty and gang violence are rampant. The idea was to free the innocent civilians of the poor neighborhoods from the grip of the gangs, and for a few years, crime did go down by rates of up to 40 percent. But now, inhabitants of the favelas “are more afraid of the police than we ever were of the drug gang,” says a resident of the of Rocinha favela.6

What changed? It’s important to note that the earlier pacification units were established in smaller and less violent favelas, where positive results were easier to achieve than later efforts in areas with higher crime rates. Second, the robust economic growth Brazil had been enjoying ran out, and the program, having failed to invest in long-term solutions, could no longer control slum violence, as it had when it had more public funds.6 Also significant are the international sporting events Rio has hosted: the World Cup two years ago and the Olympics this past summer. In preparation for these events, pacification units displaced thousands in order to “clear out” favela violence that might endanger media and athletes living nearby.2 Distrust for the authorities rose during this time when the government spent billions of $USD on sports venues instead of on the promised social programs that favelas never ended up receiving.

But at the end of the day, the factor most to blame for the pacification units’ decline in effectiveness comes back to police violence, in what a Rio-based think tank research director called “the Rocinha effect.” Following a period of several years during which Rocinha residents complained of unwarranted police violence, the favela’s pacification unit abducted and disappeared a construction worker named Amarildo Souza in 2013, falsely claiming that he was involved in a gang. Though twelve officers were charged and sentenced in this infamous case, countless incidents before and since where police violations receive impunity have outraged residents and led to defiance of the pacification units. Murder rates have since skyrocketed again.2

Brinks points to specific incidents in the 1990s to illustrate the deeply-entrenched institutional acceptance of police violence and impunity: Officer Gilson Lopes was involved in 42 killings and steadily rose through the ranks of the São Paulo police department over the course of a decade; the commander of the São Paulo police department encouraged police to kill criminals by offering a reward and time off.3 Nothing has changed: the BFPS argues that “the Brazilian government encourages the excessive use of lethal force,” allowing Brazilian police to act “as if they have been given the right to decide who dies and who lives.”2 No matter how much pressure Brazil receives from without and from within, the time when it has the money and resources to appropriately address this problem may be far in the future.  In the recession-struck and politically poisoned nation, police violence is just another entry on a long laundry list of institutional flaws to fix.