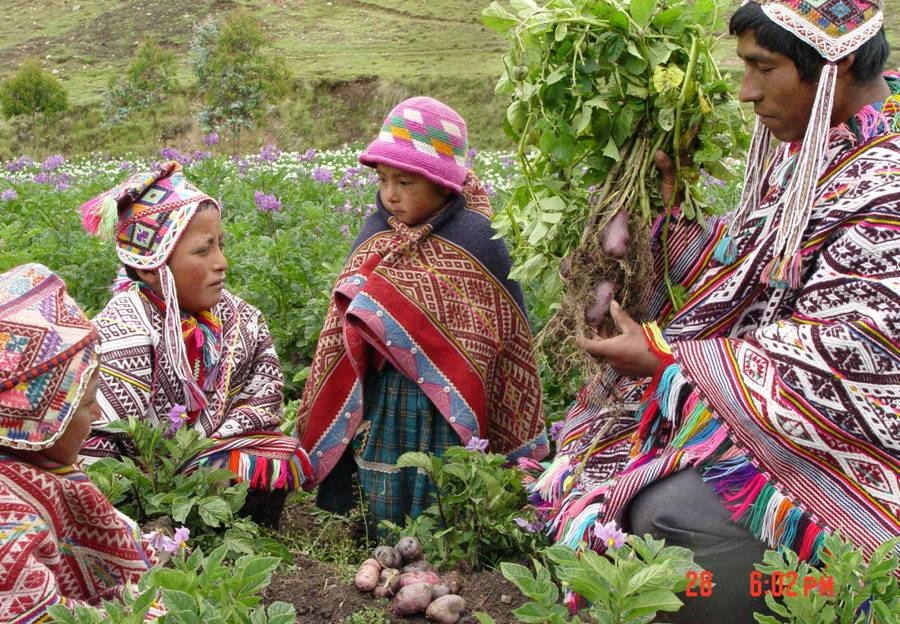 For time immemorial, the indigenous peoples of the Andes have relied on their extensive understanding of the ecosystem to exist in harmony with the environment. The Andes mountain range, which spans from northern Chile through the western edge of South America and all the way to Southern Venezuela, has provided the necessary resources for its residents to survive for millennia. Indigenous Andean farmers, who share a common ancestry in the Inca empire, have continued to use traditional irrigation and farming methods to provide sustenance for themselves and their communities while maintaining the tradition of praising Mother Earth, or ‘Pachamama’, for all that she provides.

The Inca empire had numerous strengths, including vast astronomical knowledge, incredible architectural abilities and a powerful militia. However, the empire was undeniably an agricultural society first and foremost, with its people sharing an unparalleled understanding of the land and the natural resources that sustained them. Though the empire itself fell in the 16th century, its descendants continue to rely on this environmental knowledge in their daily lives.

As civilizations began to develop in South America, people domesticated major staple crops native to the region including quinoa, corn, and countless varieties of tubers. After making contact with Europeans in the 16th century, these crops quickly spread and gained prominence around the globe; meanwhile, Andean farmers quickly learned to apply their traditional agricultural techniques to the cultivation of new staple crops from other parts of the world. But, despite the adoption of these new foods from other regions, South American farmers have continued to rely on what is perhaps the most valuable crop of all: the potato.

The potato, native to the Andean highlands, is estimated to have first been domesticated around 8,000 years ago in the mountains near Lake Titicaca, which sits on the border of what is now Peru and Bolivia (Atlas Obscura). Since its early cultivation, different varieties of potato have spread throughout the continent and become essential to the cultures and cuisines of South America, featured in dishes such as Papa a la Huancaina in Bolivia or Caldeirada in Brazil. Over time, the potato has found its way into the diets of over 100 countries, making it the 3rd most important crop in the world (Australian Broadcasting Corporation).

Although in the United States we’re accustomed to only cooking with one or two different kinds of potatoes, there are actually between 3,000 and 5,000 different varieties around the world (Atlas Obscura), each varying in color, size, flavor, and cultivation method. Potatoes are considered a particularly efficient crop given that they are self-pollinating, can adapt to a wide range of climates, and produce more food per unit of water than any other major crop (ABC).

What’s happening to the potato?

Despite its prominence as a staple crop around the world, many scientists are concerned for the future of the potato in the Andes as a result of increasingly unpredictable environmental changes in the region. Rising temperatures and abnormal weather patterns are making it more and more difficult for Andean farmers to make a living—or even just to provide for their own families. The Andes have been particularly hard-hit by these climatic changes, in part due to El Niño events which cyclically strike the Pacific coast of the Americas every few years.

As a result of higher temperatures, accompanied by an increase in pests which endanger key crops, farming communities in the Andes have been forced to migrate upwards in order to continue food production. Farmers in the region claim that, over the last 30 years, they have had to move to elevations around 1,000 meters (~3,280 feet) higher in order to continue planting potatoes as before (Upside Down World).

The changing environment also complicates the ability to predict upcoming weather patterns and the viability of the growing season. While farmers have traditionally relied on the cyclical patterns of the rainy and dry seasons, changing conditions have made these patterns increasingly erratic and have led to a shorter overall rainy season, making it more difficult for farmers to reach necessary yields of crops. According to local farmers, the growing season has already shrunk substantially, from 5-6 months long to around 4 (UDW).

In addition to making it more difficult to produce crops in the first place, unexpected weather patterns and temperature fluctuations are also harmful to the crops that actually do survive. These temperature swings harm essential nutrients in growing crops, making them less valuable overall once they have been harvested.

The ‘Potato Guardians’ come to the rescue

In the face of these climatic changes, however, a group of farmers in the Valle Sagrado (Sacred Valley) of Peru has identified a potential key to ensuring food security for themselves and for their communities: biodiversity.

This group of indigenous farmers, who call themselves the Papa Aririwa, or ‘Potato Guardians’ in the native Quechua language, is comprised of five different farming communities who work near the city of Cusco in the highlands of Peru to preserve the biodiversity of the potato. These ‘guardians’, around 6,500 people in total, work as a collective on 9,000 hectares of protected land which they call the Parque de la Papa (‘Potato Park’) (ABC). The park, founded in 2002 (UDW), has been fundamental for the mission of these agriculturalists to acknowledge and inform others of the importance of crop diversity, since even the smallest difference between two species can provide for one’s survival over the other—and, therefore, sustenance for those whose livelihoods rely on consistent production. The farmers currently cultivate over 600 different varieties of potatoes.

Surrounded by the apus, or holy mountains, the location of the Sacred Valley is largely symbolic of the history of the Inca empire as an agricultural power which considered its major crops, and the land that they worked on, to be inherently sacred. By using traditional agricultural methods to protect the diversity of these crops, the members of the Parque de la Papa are actively preserving the knowledge of their ancestors, using natural and sustainable methods to live off of the land while simultaneously praising it for all that it provides.

The notion of biodiversity as a survival tactic may seem odd to readers in the U.S., where we tend to overlook the value of crop diversity, instead opting for more technically efficient monoculture plantations which yield a larger profit. In the United States, we only rely on a few species of crops to survive; while this may provide us with the highest yield in the short run, it means that we are incredibly vulnerable to sudden environmental changes or to mass pest infestations. In 2010, the UN Food and Agricultural Organization released a report warning of these risks and claiming that the world has lost 75% of its crop diversity since 1900 (IC).

These agriculturalists in the Andes, however, have made a conscious effort to preserve the biodiversity of the crops that they value the most, actively ensuring their own resiliency in the face of challenges posed by the ever-changing climate.

In 2011 the Parque de la Papa opened its own community storeroom, where it keeps an inventory of seeds of hundreds of different potato varieties to plant and to share with communities that need them (UDW). The storeroom, called Papa Takena Wasi (‘Potato Storage House’), has a capacity of around 8,000 kg, and is a key part of the Papa Aririwas’ mission to preserve as many varieties of the staple crop as possible.

The Parque de la Papa works together with the International Potato Center (CIP) in Lima, the nation’s capital, to trade seeds, exchange knowledge of different crop varieties, and promote biodiversity. The International Potato Center is a gene bank and research center for potatoes, and is actually the largest in vitro gene bank in the world. The bank collaborates with indigenous farmers to learn more about different varieties of potatoes and to breed new types that can survive in different conditions and provide more micronutrients (ABC).

Although these ‘Potato Guardians’ are doing necessary work and deserve recognition for the value that they place on biodiversity, however, they are not immune to the environmental changes that are plaguing the region. Rising temperatures and the increasing threat of pests mean that the Sacred Valley too, in due time, will no longer be suitable for the cultivation of potatoes. Experts, including the curator of the CIP seed bank, claim that in as few as 40 years, there will be nowhere left in Peru’s highlands to plant potatoes (UDW).

As we face such dramatic changes in the environment, it is undeniable that many communities will have to learn to adapt to new conditions. One way to do so is by preserving biodiversity, as the Parque de las Papas and the International Potato Center have done. By doing so, we can ensure that the communities that are hardest-hit by changes in the climate are able to survive and maintain their livelihoods. As indigenous peoples in the Andes have become especially vulnerable to these changes, they have taken action to become more resilient and provide for the survival of their communities and their traditions. It is necessary that we look to these indigenous groups and their unparalleled knowledge of the world around them as we seek ways to adapt to our increasingly unfamiliar environment in the coming years.