Latinos and the Digital Divide 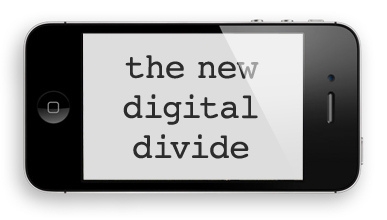 The digital divide between Latinos and Non-Latinos in the United States is narrowing, but what does that really mean?

The Pew Research Center has come out with new details about Hispanic-Americans’ technology habits. Overall, more Latinos are using the internet. Yet, the number of Latinos with broadband internet has barely changed in the past six years. This leaves a confusing picture of how Latinos are connecting in the modern age (1).

Hispanic-Americans have been lagging behind most other groups in terms of gaining reliable internet access and having broadband at home. On the other hand, they are one of the groups most likely to have a smartphone. Pew’s research shows that the Hispanic population is largely gaining internet access, but only through smartphones. In fact, 80 percent of Latinos access the internet through their smartphone (2).

The decrease in the digital divide was due in large part by the increase in technology usage by two large subsets of Hispanic Americans. The first subset is immigrant Hispanics who were born in Latin America and moved to the US. Their use of the internet grew from 51 to 78 percent in the past six years. The second subset is Latinos who identify as Spanish language-dominant whose use of the internet increased the most from 36 to 74 percent (3). Still, the lack of broadband internet which allows for laptop and desktop computer usage is still a problem.

It is much harder to access job applications and medical records and do homework on a cell phone. With more and more being transferred to an online-only format, it is challenging for Latinos who do not have reliable access to internet and broadband to thrive.

Despite the improvements in the technological gap, the effects of the digital divide are still being felt by Latinos of all ages, in a wide range of ways. One way the digital divide has affected Latinos is through healthcare. In 2012, at least half of health care providers had enacted online health portals for patients to use to seek care and access their health records. This increase was started by the Electronic Health Record Incentive Program which has applied pressure to providers to use online methods (4). One study from the University of California, Merced found that Latinos, especially those born outside the U.S., are less likely to access healthcare information online and expressed discomfort in filling out online healthcare forms (5). While in most places there are still paper options for most forms and information, it is important to note that technology is moving faster than the population and people are getting left behind. Many of them are senior citizens (especially those who are not confident English speakers) who often have the greatest need for healthcare.

Not only does the technology gap affect healthcare, but it also affects the achievement gap for Latinos in terms of education as well. Digital skills are now becoming a required part of education from an early age. Those students who do not have broadband service at home, struggle to complete assignments that students from technologically advanced households can easily do. For students who must type papers and do research projects, a smartphone is simply not enough.

President Obama discussed the need for an expansion of broadband services for lower income families in his 2014 State of the Union. His partial solution was the E-rate program which helped to provide broadband to underfunded schools at a subsidized rate. While this may have helped close some of the digital divide between schools, it does not assist the students who do not have the option to go online at home.

A study by the Joan Ganz Cooney Center looked at how Mexican-American families relate to technology. The study found that many Latino families were being assisted by the government’s Connect2Compete program. This program works with telecommunications providers to offer broadband for $USD 10 a month for families in which the child qualifies for a free lunch. One district in Arizona even gave a computer to all the students above the fourth grade that they could bring home at night. The goal was to allow for the families to use the computer as well, but in reality the families did not end up using them. Often the families felt that they were not qualified to use the computers and that they were only to be used for school work. Of the families in this case, 71 percent were immigrants and 60 percent were more comfortable speaking in Spanish than English (6).

Technology can also be used to combat the achievement gap for Latinos. As the demand for bilingual apps and online resources increases, so does the supply. Technology can be used to help young children learn and can help fill in the gaps where teachers and parents may be lacking. They can also be a good way to get parents more involved in their children’s education (7). Until the digital divide is fully closed, the technology will be just another thing that adds to the achievement gap for Latinos in America.