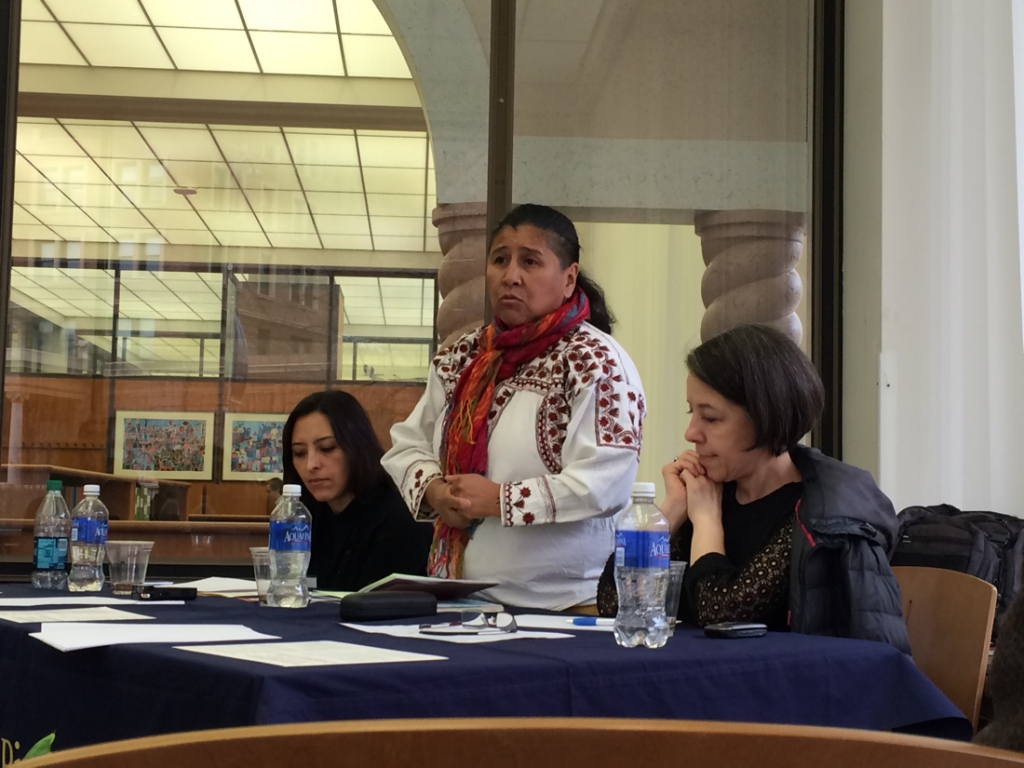 In the spring semester of 2013, the University of Pittsburgh held an interdisciplinary conference entitled “Feminism and the Ruses of Coloniality” at which the Bolivian feminist Julieta Paredes gave a speech entitled “Communal Feminism is Revolutionary Feminism”. This year, Paredes attended the University’s First Symposium of Bolivianists, where she spoke again. Her talk was entitled “Depatriarchalization, a Categorical Proposal of Communal Feminism.”

At both functions, Julieta swept the room away with her commanding presence and indigenous-centric feminist theories. Although she is a petite woman, her dynamic voice and inspiring enthusiasm always demand the attention of her audience. She insists on standing while delivering her lectures and her hands never seem to stop moving as she speaks, additional characteristics that make her words engaging. Both times that I have seen her speak, the audience explodes with applause, underscoring their approval.

Paredes is a prominent feminist figure in Latin America, known for having co-founded the organization Mujeres Creando (Women Creating) and for being one of the only openly gay activists in Bolivia at the time of this organization’s founding in 1990.1 This organization was one of the only feminist groups in Bolivia and was known for its anti-poverty work as well as political demonstrations, performances, and radio show. This original group split up due to ideological differences in 2001, and Paredes founded the organization Mujeres Creando Comunidad (Women Creating Community), a Communal Feminist group.2 Her unique perspective as a mixed race, lesbian woman, places her on the margins of society and leads to a perhaps more unconventional presentation. In a room full of slightly more reserved Latin American scholars, Paredes sticks out as a refreshing voice that is often lacking from the traditional academic setting.

Paredes’ first presentation focused on envisioning the feminist movement as a united community that does not allow for the individualistic mindset that is characteristic of contemporary society and the Third Wave of mainstream feminism. She also spoke of issues with our language and epistemologies. Paredes tied all of her ideas together with the quasi-anarchist view that the state gives rise to most of these issues and that an alternative to the state is “el pueblo” or the collectivity of the people.

Throughout her discourse, Paredes focused on language as a vehicle of inclusion. She chose to use the female “nosotras” form instead of the typical male dominated “nosotros” (both meaning “we” in English). Paredes rejected this grammatical norm by using exclusively “nosotras” when speaking in the collective first person subject and verb tense. Paredes’ entire presentation was given in Spanish, while the question and answer follow up was translated to English by an academic colleague. As he translated on the spot, she asked him if that was exactly what she had said. In this way, she exhibited a resistance to translation, a resistance to giving way to the hegemonic English language. As a feminist from the “global south,” Paredes seemed skeptical of global national and cultural hierarchies as well as issues of gender and racial domination.

Paredes covered issues of racial and Western hierarchies that either fail to acknowledge or highlight the differences between people. Often times, “First World” issues colonize those of the “Third World,” a term which also lumps together a great number of diverse women into one group. Paredes pointed out that Western ideas seek to homogenize the world, annulling the differences between women. She also speaks of racism as a hierarchy of skin colors, with mestizo (mixed race) people of varying skin tones being so common in Latin America. Paredes similarly states that we cannot completely forget differences for the sake of the hierarchy of sexual oppression, although women do need to come together as a an inclusive community in spite of these differences.

She also believes that the current individualistic society has given rise to the state. Individuals seek protection from the state, since they are not part of a community that will protect them. In this way individuals legitimize the state’s power and actions. She seeks to create an  alternative community, that will take the power back from the state. This relates to the title of the lecture, she shows that if we come together we can create our own revolutionary community that will not have a need for a larger national body. She also claims that the state controls the dominant epistemologies, and therefore dictates society’s dominant perspective of the world.

The focal point of this lecture was the creation of a community in order to foster the feminist movement. She speaks of the community as a body, in which the male, female, and intersexual all exist harmoniously. Paredes claims that individualism cannot exist in this movement. She includes all, despite sex, gender, race, and class to join in the movement of feminists in order to create a new community.

Paredes’ recent talk focused on the concept of plurality, and proposed pluri-nationalism as a solution to the current single-state system that is found in most modern nations. To achieve this, one must think in terms of decolonization.

One way to decolonize is to claim autonomous agency through identifying oneself. Another method to do this is to reimagine time in a non-Western tradition. Although the history of colonization is often linked to the year 1492 as its start, Paredes emphasizes that this is only one singular date in the cycle of time. The view of time as a linear structure is a westernized perspective that Paredes refutes by imagining it as a circle. She suggests that we see time in terms of a recycling of phenomena. The dominance of patriarchalization will continue in other power structures, unless the system in which we live is changed.

Depatriarchalization comes about by recognizing the multitude of beings that exist in the world. As in her previous presentation, Paredes indicated that three types of bodies; male, female, and intersexual exist, and that despite gender or sex, any individual can join in her idea of communal feminism. Individuals are marked by their bodies, and therefore an oppressed indigenous man can identify with women and join the movement against colonizing forces such as patriarchy.

Her ultimate solution to these issues is to resist the power of the institutions that create systems of dominance. Her unique viewpoint as a woman outside of Western feminism offered a new approach to some of the issues that the feminist movement faces. She ideally sees the feminist movement as an all-inclusive group that will foster community in order to deny the patriarchal state the basis of its power and therefore illegitimatize its actions. Paredes sees the state not as the answer to our problems but rather a bridge that will lead to the next movement. She envisions this as a pluri-national communal feminist movement that will address the needs of the oppressed by working toward a collective goal of decolonization and depatriarchalization.