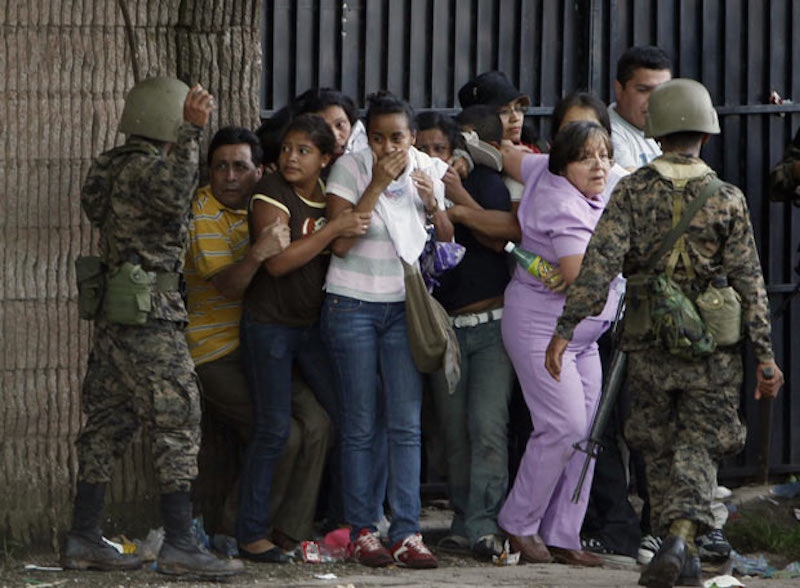 Planes land daily in San Pedro Sula, returning over 100 deported Hondurans, mostly young men, donning shackles and telling horrifying tales of US detention centers. In addition to the heart-wrenching failures of attempts to unify with family in the US, or to finally find work without the threat of violence, they were subjected to the “icebox,” where immense crowds and limited space forced them to stand for hours on end, rotating for the opportunity to lie down and sleep.1 The advocacy group, Human Rights Watch, has reported many illegal immigrants are being quickly screened and deported before having adequate opportunity to explain their motivations and fears of home. Customs and Border Patrol requires each immigrant to be questioned if they have fears of return. If they affirm, they are required to submit to an officer for interviewing. It is estimated that less than two percent of Hondurans get the chance, the lowest statistic of all US-immigrating nationalities.2

Even more devastating is the desolate reality for Hondurans today. The economy has collapsed and social protection laws including minimum wage regulations are are constantly violated.1­Urbanization is rapid; killing campesino farming efforts and swarming multinational maquila zones. Jobs are scarce; over 70% earn below the poverty level minimum.1 Circumstances are not expected to improve much, especially as multinationals relocate to countries such as Vietnam, where minimum wages are nearly one third of the Honduran level and human rights are scarce. Because of laws such as the Investor State Dispute Settlement, these multinational corporations can sue for lost profits if the Honduran government attempts to raise the minimum wage in order to reduce poverty.1 Over 40 percent of Hondurans are considered to be living in extreme poverty.3

Severe drought in the end of October has affected over half a million Hondurans due to threatened hunger and crop loss. Honduran farms are already suffering as domestic food prices continue to lose competitiveness to their imported competition and farmers who are earning consistently lower incomes, many selling belongings and ridding of livestock to stay afloat.3 In an interview with The Nation, Noam Chomsky attributed Honduran local market destruction to displacement due to the Central American Free Trade Agreement or CAFTA, which has locked Central America into competition with highly subsidized American agribusiness.4 A deadly fungus devastated this year’s coffee output as well, which is Honduras’ main cash crop. The Red Cross has applied for a $USD 1.28 million appeal to assist 17,500 sufferers. Declining hygiene and chronic malnutrition are plaguing an estimated 22.6 percent of the population.4

Honduras has one of the world’s highest per capita murder rates, infamous armed gangs battle for drug power and often resort to violence, extortions and kidnapping. CONADEH, Honduras’ national commission of human rights estimates at least 12 people are murdered everyday, over 60,000 between 2000 and 2013, making it the nation of about 8 million the most violent in Central America.5 Honduras boasts the most murderous city in the world, San Pedra Sula, and also takes another top spot with its capital, Tegucigalpa, in 4th.6 San Pedra Sula has an annual murder rate of 169 per 100,000, barely comparable to the US leader Flint, Michigan, with 62 for every 100,000. Bodies hacked like meat sit in garbage bags along the road or rot in vacant fields. Over 97 percent of these murders go unsolved.6 Many of these deaths are of innocent victims caught in crossfire, particularly urban, working children walking the streets midafternoon. Police corruption and a general sense of lawlessness is widespread and criminals seem to uncontestably maintain power. Gangs such as Mara Salvatrucha (MS-13) and Barrio 18 gained popularity and power in the 90s, when the US began deporting dangerous Los Angeles gang members to Honduras.6

The responsibility of the United States in this matter is highly contested but has simmered somewhat in US news. Central American governments argue drug demand coming from the States fuels illegal narcotics and its accompanying violence and gang life. It is estimated over 90 percent of all US-bound cocaine passes through Honduras.6 In January of 2008 Dana Frank of The New York Times published, “In Honduras, a Mess Made in the US.” She recalled the 1980s in Central America plagued with war between US right wing forces and Soviet-supported leftists. It transformed into the War on Drugs, supporting governments and often finding worsening conditions in human rights and rule of law. Over $USD 75 million is sent to the Honduran government annually in drug-interdiction aid; drug-associated politicians are present in nearly every level of the government. Drug associated aid trumps US-Honduran democracy, human rights and governance aid almost 10 times.6 Honduras, the central focus of her research, has been the nation most tied to US influence, demonstrated in US recognition of the 2009 military coup which overthrew the popularly-elected leftist President Manuel Zelaya Rosales.6 Frank attributes the rapid emigration from Honduras to its devastating brutality, not to the American dream or to anticipated economic gains. She points the finger at Congress who she claims thoroughly understands the Central American situation and America’s role in it. Frank, back in 2012, insisted that Congress “stop feeding the beast” and work toward better trade policy paired with more efficient and productive financial support. With over 68,000 unaccompanied children apprehended since the beginning of this year, the issues of her concern are more prevalent than ever.7

Guatemala, Honduras and El Salvador have proposed an ambitious development to Washington to help resolve some of the underlying issues and create jobs while raising living standards. It also aims to advance infrastructure in energy supply, roads and airports. The program would pump about $USD 10 billion into the Central American region at a rate of $USD 2 billion per year.8 They projected about 60 percent of the total to be provided by the United States and the rest through a combination of loans from the Inter-American Development Bank and World Bank, then further supplemented with private sector funds. The total sum of $USD 10 billion is about 10 percent of the annual US government budget on border security. Unfortunately, US Secretary of State John Kerry has expressed his feeble hopes for a much lower sum of $USD 300 million in funding for similar programs.8 After Tuesday’s overwhelming Democratic defeat, a Republican majority in both houses will necessarily impede the approval of any progressive immigration policy under this more deeply divided government. Vice President Biden is due to meet with various Central American leaders next Wednesday, November 12th.

4)   Grandin, Greg. “Noam Chomsky on the crisis in Central America and Mexico.” The Nation. Available at: http://www.thenation.com/blog/187097/interview-noam-chomsky-crisis-central-america-and-mexico#

6)   Relph, Jeremy. “Dispatch from Honduras: What life is like in the murder capital of the World.” Business Insider. Available at: http://www.businessinsider.com.au/murder-capital-san-pedro-sula-2014-10/

7)   Large, Jerry. “US has a hand in Honduran mess.” The Seattle Times. Available at:http://seattletimes.com/html/localnews/2024881307_jdlcolumn27xml.html