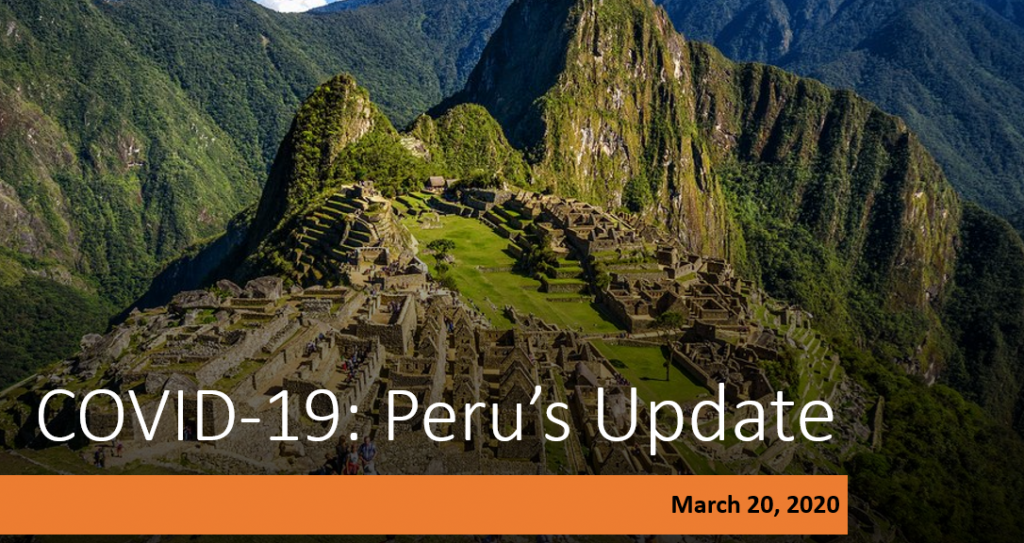 Since the declaration of the COVID-19 as a pandemic by the World Health Organization, several developed and developing countries started to implement national policies to prevent the spread of the virus within their borders. Peru is also placing several COVID-19 contention policies, including the state of emergency, extraordinary bonus to the health sector, and financial aid for vulnerable people under poverty.

The Peruvian President Martin Vizcarra has declared a state of emergency under the supreme decreed No. 044-2020-PCM to fight COVID-19. The exceptional regimen adopted in this country began at the 00.00 horas of March 16, 2020, with a duration of fifteen calendar days where citizens are requested to obey mandatory social isolation (quarantine) to prevent the spread of the COVID-19. In this context, the national police and the armed forces are responsible for ensuring compliance with the norm.

A state of emergency implies that some constitutional citizens’ rights are restricted, for instance, liberty, security, inviolability of property, and the freedom of assembly and transit. The free transit of people under quarantine is also limited. Citizens are only allowed to leave their houses to acquire, produce, or supply essential goods and pharmaceutical products; or if they require health services. Also, public and private institutions will remain closed, including schools, museums, and universities. Moreover, restaurants and gathering events are also forbidden. Despite the several limitations for most of the population, a few exceptions allow the normal functioning of sectors such as food production and banking services.

The decree of a state of emergency also specifies, in article eight, the “temporary closure of Peru’s borders.” Peru suspended the international transports of national and foreign passengers that tried to enter the country by air, sea, land, or rivers. However, with the rapid outbreak escalation, foreigners in Peru aim to return to their countries are now facing challenges. For instance, the Australian government advised its citizens in Peru to find a commercial flight and return home. However, due to the excessive increase in flight tickets from Lima to Sydney, in some cases higher than $5000.00, many Australians remained in Peru. Also, Israelites are having difficulties leaving the country due to excessive flight-ticket prices. However, the Israelites requested public help to the Israeli government to return to Israel. After the request, Foreign Minister Israel Katz communicated an agreement with the company El Al to assist in bringing Israelis in Peru back to Israel (The Times of Israel, 2020). The situation can be assumed to be affecting any other foreigner currently in Peru.

After Brazil, Peru is the second country in Latin America with the highest number of people with COVID-19. This is likely due to the high levels of tourism inflow that Peru typically receives. Local news reported that Peruvians from the capital and other big cities (e.g., Lima) are not particularly adhering to the state of emergency, mostly due to work in the informal sector. However, Peruvians from small cities like Cuzco and Puno, there is a higher adherence to quarantine rules. The Peruvian government is playing a pivotal role by updating information about the COVID-19 and reinforcing the message of “stay at home” daily. We expect that these measures increase the commitment of Peruvian citizens and help to contain the spread of COVID-19 in Latin American and the world.